Univision Génesis Suero and Yelus Ballestas discussed in the middle of the broadcast of Nuestra Belleza Latina 2021.

Génesis Suero and Yelus Ballestas, two of the nine finalists of Nuestra Belleza Latina 2021, are immersed in a great controversy for a comment that sparked the outrage of viewers.

In the midst of a challenge of physical resistance, Ballestas chose to call Suero “Geneso”, this to refer to his thick tone of voice.

After the images of the impasse were released, the participant of Venezuelan origin apologized to her partner of Dominican origin.

“What I did seems very bad to me, but I don’t know if you see my laugh there, that is not an evil laugh. What I told you is very wrong, I apologized and you told me that it didn’t matter, that you hadn’t stopped that; but it seems worse to me that you wait for the cameras to arrive to do that, “said Yelus Ballestas, referring to the supposed drama that Génesis Suero put together in front of the reality show cameras.

Ballestas went on to mention: “Anyway, I apologize again. It does not happen again, neither with you nor with anyone. Only people who know me know that I can make that kind of joke with people. “

There is anger !: Genesis and Yelus clash after the latter told him “Geneso”. Génesis Suero pointed out that he has always been the victim of attacks and criticism for his tone of voice and this situation has also been presented in NBL, since Yelus Ballestas He said “Geneso”. The Venezuelan did not think that the Dominican raised that issue, since she had already offered her apologies, and both of them … 2021-10-18T13: 43: 14Z

Before the statements of the Venezuelan, Suero refuted: “I respect her point of view that she thinks that was when the cameras appeared and as she offered an apology, I had a healthy heart that pain (…) She asked for forgiveness and the waters. On my part, I have peace and it’s over ”.

“I was surprised when they called me ‘Geneso’. But now it’s over. Ping pung pang ”, stated the Dominican participant to conclude the controversy with Yelus Ballestas.

The reactions of the viewers were not long in coming on the YouTube platform: “Apologizing does not erase your bad actions, every action has a reaction, if this Yelus had the courage to make fun of Genesis in public, then may she have the courage to face the consequences in public, it’s that simple. How cool she wanted to humiliate Génesis and not expose her ”,“ That is typical of Venezuela, to humiliate others ”,“ They give a lot of importance to two fighting and badly educated women. This program without Osmel Sousa lost a lot of glamor and impact ”.

In a video behind the scenes of the third gala of NBL 2021, Ballestas explained in detail everything that happened with Génesis Suero: “It doesn’t bother me that she was upset by what I told her, I apologized for that. It only bothers me that he says that everything is fine and suddenly, the surprise appears on cameras ”.

When asked if she had apologized to Suero before the images of what happened were exhibited at the gala on Sunday, October 17, the Venezuelan replied that she had indeed done so: “Totally, she told me that everything was fine. I was surprised by the reaction.

“I don’t know why she was upset. The one who should be upset is me, because he bullied me because of my voice. So I do not understand … Forgiveness has already been asked and everything is in peace with me, ”said Génesis Suero when listening to the statements of his partner in front of the cameras of the NBL 2021 social media team.

Genesis Serum broke down in tears

In a revealing confession in front of the cameras of NBL 2021, Génesis Suero broke down in tears when remembering that she has been the victim of harassment on more than one occasion due to her tone of voice, a painful situation that has accompanied her even during her time in the reality show.

Regarding the mockery of her colleagues from Nuestra Belleza Latina, the Dominican woman highlighted: “I don’t understand why you are doing this to me. Yes, I am fun and spontaneous, but I am not used to this. Are they trying to murder my character or what? 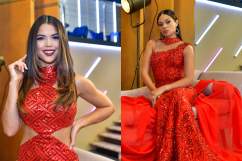 Netflix set up its great day dedicated to 'La casa de papel' on Tuesday at the Vistalegre Palace in Madrid....