Univision Find out how to vote for young women in danger of elimination in the initial phase of Nuestra Belleza Latina.

The new season of Nuestra Belleza Latina is officially back on Univision programming. Eighteen young people have already been pre-selected by the judges, while another three are in danger of being left out of the important reality show.

Alejandra Argudo, Thalía Lara and Karina Zevallos are the three young women who failed to fully convince the four judges to be able to obtain a pass to the group of pre-selected ones for the new season of Nuestra Belleza Latina. However, the audience can save two of them to continue in the competition for the purpose of earning a pass to the mansion of beauty.

Argudo, Lara and Zevallos can be saved by viewers through voting that are currently open for a period of 24 hours.

NBL 2021: How to vote for young women in danger of being eliminated from the reality show?

Viewers can save two of the three young women in danger of elimination in the opening phase of the new season of Nuestra Belleza Latina. There are two very simple ways to vote: Through the official Univision website or by calling the telephone numbers that were assigned for the voting of each of the young women.

Voting via phone calls is completely free, according to information posted on the Univision website.

Voting is limited to ten votes from the same telephone number.

NOTE: It is important to mention that you only have 24 hours (from the end of the broadcast on Sunday, September 26) to be able to vote for your favorite candidate.

Learn how to vote online through the Univision website

Participating in online voting is very simple: You just have to click on the following link, select the photograph of your favorite and that’s it … Hit the vote button!

Every online user has a limit of 10 votes and only has 24 hours to vote since the gala ended on Sunday, September 26.

The names of the two young women who will continue in the competition will be announced during the next Nuestra Belleza Latina gala, scheduled for Sunday, October 3.

Who can vote for the young women in danger of elimination in Nuestra Belleza Latina?

Univision announced that voting counts, as long as it is calling from a telephone number with an area code within the 50 states of the country.

As for online voting, anyone can cast a vote within the 50 states of the country. Residents of the District of Columbia and Puerto Rico can only cast their votes through the official Univision website.

Although it is true that voting closes within 24 hours from the end of the transmission of each Nuestra Belleza Latina gala, the names of the saved candidates will be revealed during the transmission next Sunday. 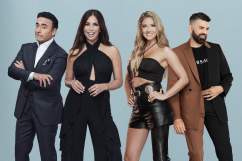 NVIDIA has unveiled its next-generation cloud gaming platform, which will employ the GeForce RTX ™ 3080 graphics card and will...

Director of photography Halyna Hutchins died this Thursday in an accident on the set of Rust, an independent western filmed...