Univision Meet the celebrities who will be part of the first gala of Nuestra Belleza Latina 2021.

The first gala of Nuestra Belleza Latina 2021 promises to be full of great surprises and emotions, both for the participants and for the panel of judges of the reality show.

This Sunday, the audience will discover the result of the voting and who are the candidates that will be part of the first gala. To get one of the ten positions in the NBL Mansion, all 20 candidates must win a challenge that will test their talents as communicators.

The premiere of the new season of Nuestra Belleza Latina 2021 featured a diverse group of women, who shared their shocking stories with members of the jury during the audition process. Selected from more than 6,000 participants, NBL applicants have diverse roots and represent different Latin American countries.

Univision announced an outstanding list of personalities who will be participating in special segments during the two-hour broadcast of the second episode of the twelfth season of Nuestra Belleza Latina.

In the opening act, Alejandra Guzmán, the Queen of Rock in Spanish, will present the world premiere of her most recent single, “Quiero Más De Ti” and “Eternamente Bella”, in a musical number in which all the candidates will dance.

The jury, made up of Daniella Álvarez, Giselle Blondet, Jomari Goyso and Adal Ramones, will choose the winners of the challenge, and the audience will also have the opportunity to have a voice and vote in the decision. Amara La Negra, the Mansion’s host, will take the chosen contestants to her new residence, the NBL Mansion.

What was the audience level for the premiere of Nuestra Belleza Latina?

Nuestra Belleza Latina became the top-rated entertainment program on television among all Hispanic demographics in the United States this past Sunday, September 26.

In addition, the premiere of the television production generated conversation with an increase of interactions on social networks of +19 percent on Facebook, Instagram, Twitter and YouTube compared to the premiere episode of the program in 2018. 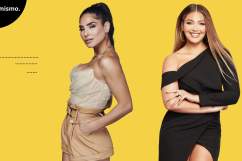 Although it has been more than a month since the premiere of The Squid Game - 100% on the Netflix...