Univision Everything you need to know about the first gala of Nuestra Belleza Latina 2021.

Today, Univision will officially broadcast the first gala of Nuestra Belleza Latina 2021. The broadcast will begin through the television network at 8:00 PM ET.

During this past Sunday, September 26, Univision broadcast the grand premiere of the twelfth season of Nuestra Belleza Latina. As in previous years, the reality show broke audience records in the evening hours of the “Family Sundays” of the television network’s programming.

On tonight’s broadcast, only ten of the twenty pre-selected will achieve a position in the Mansión de la Belleza, a building in the city of Miami where they will be living during the time they are participating in the Univision television competition.

During this new season of Nuestra Belleza Latina, Univision is looking for a talent with an integral beauty that represents the diversity of Spanish-speaking women who make life in the United States.

The jury for the twelfth season of the reality show is made up of personalities such as Giselle Blondet, Jomari Goyso, Daniella Álvarez and Adal Ramones.

The winner of the first edition of Nuestra Belleza Latina, Mexican Alejandra Espinoza, is the main host of this new season of one of the most viewed productions on Univision programming.

The new season of Nuestra Belleza Latina airs every Sunday on Univision starting at 8:00 PM ET.

Everything you need to know about the first gala of Nuestra Belleza Latina 2021:

MUSICAL GUEST: Alejandra Guzmán, the Queen of Rock in Spanish, will present the world premiere of her latest single, “Quiero Más De Ti” and “Eternamente Bella”, in a musical number in which all the candidates will dance.

WHAT WILL HAPPEN IN THIS FIRST GALA: To be part of the official participants of Nuestra Belleza Latina 2021, the 20 pre-selected must face a test in front of the jury to win the coveted pass to the Mansion of Beauty.

HOW MANY CANDIDATES WILL ENTER THE MANSION OF BEAUTY: Only ten participants will be able to become the official candidates for the new season of Nuestra Belleza Latina. One of them will be the successor to Migbelis Castellanos and will be part of Univision as one of the freshest faces in the television network’s programming.

WHO WILL SELECT THE TEN PARTICIPANTS OF NBL 2021: The candidates for the reality show will be selected by the qualifying jury, made up of Giselle Blondet, a longtime star at Univision; Jomari Goyso, Univision personality and host of “Sal y Pimienta”; and in her debut on the show, Daniella Álvarez, television host and model; and Adal Ramones, television host and comedian. 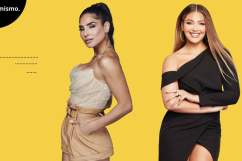 Tarantino says his next movie could be ‘Kill Bill 3’

Quentin Tarantino said he has "no idea" what his next film will be, although he pointed to the hypothetical 'Kill...