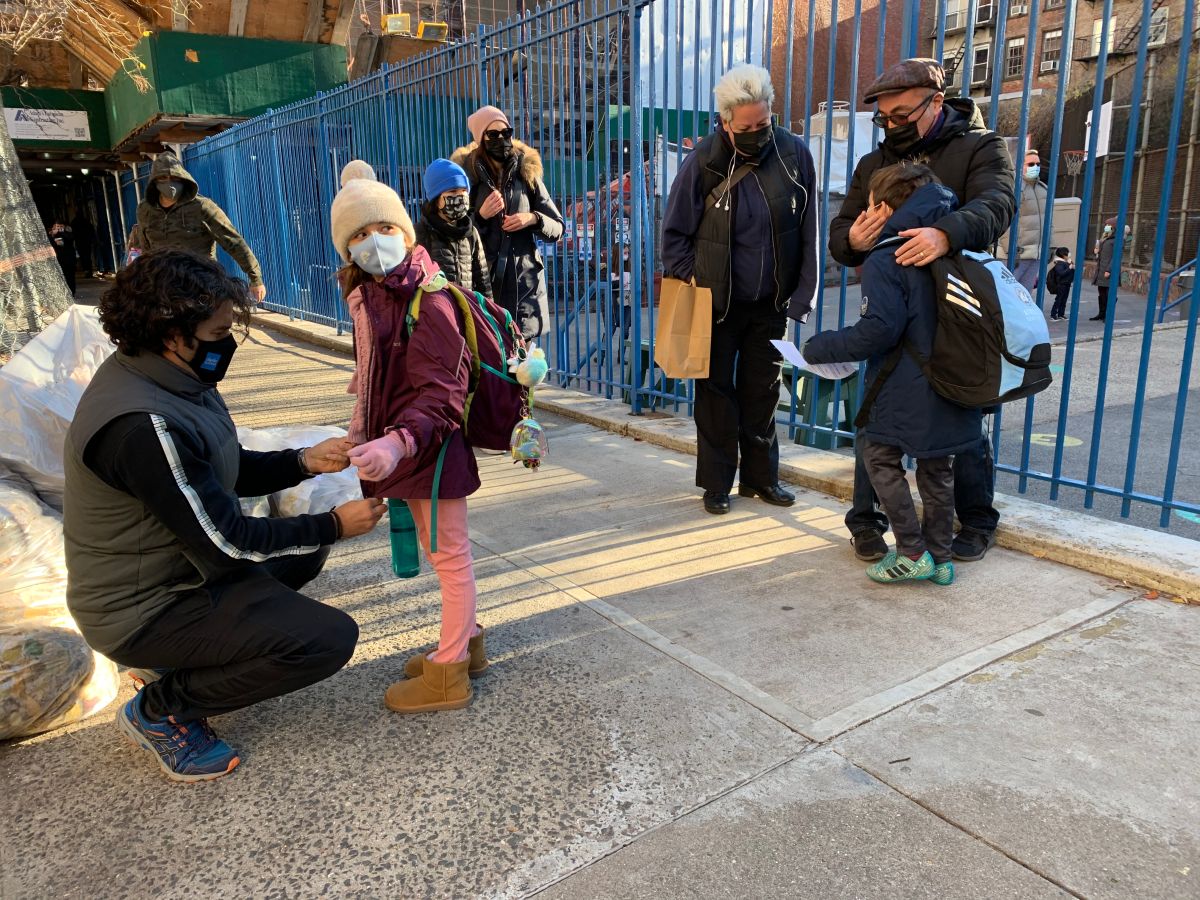 After being closed for three weeks due to the increase in COVID-19 cases In New York City, this Monday began the process of reopening face-to-face classes, with the arrival of thousands of preschool and elementary school students to the campuses.

And although the day was characterized by scenes of joy that were seen on the faces of many children, and the concern of some parents at the growing wave of new infections of COVID-19 In the Big Apple, the message from the City, doctors, experts and educational institution staff is that schools are currently a very safe place.

While the COVID-19 infections in the city are around 5%, with 0.28% As an index of new cases when the schools were ordered to close in November, it is according to experts the best confirmation that the schools do not represent a source of spread of the coronavirus and the goal of the City will be to maintain that panorama.

This was stated by the mayor Bill de Blasio, after declaring himself very happy with the reopening of 850 school buildings throughout the city, which they hope to receive this week 190,000 children.

The president insisted on asking parents to trust the school system and gave his word that they will continue to do what is possible to keep students safe, teachers and staff.

“We have 850 places where there is joy and hope again because the children have returned to school,” he said. De Blasio, warning that an important key to keeping the coronavirus boom in check will be testing, so he asked the children’s parents for help in this new process.

“We need your help to continue filling out those (testing) consent forms. By now, a large majority of parents have already completed consent forms. Any parent who has not had the opportunity to do it, right there, when they arrived, they were doing it, they were ready to see their children take the test, “said the president, warning that the goal is that the children who opted for face-to-face classes they can be in schools five days a week.

“We will continue to strive for that to be the maximum number of children possible, gaining that learning five days a week (…) I have absolute confidence that our school communities are doing an incredible job, they really take care of each other. And with the masks, the ventilation, the social distancing, all together to keep people safe, it is remarkable, ”said De Blasio.

Mayor He also noted that District 75 special education programs will reopen on Thursday and in high-contagion areas of Staten Island, schools will open on Wednesday.

“We must keep everyone safe, that is the key. But, for everyone in the school community, they have done an incredible job. And the schools in this city are among the safest places to be. So, with the additional weekly tests ”, added De Blasio.

Michael Mulgew, President of the United Federation of Teachers (UFT), understood the fear and concern of some parents and teachers, but was on the same line as the Mayor and also assured that the schools at this moment they are safe.

“The road to reopening New York City public schools in the face of coronavirus has been a long and difficult journey, frustrating both parents and teachers. But now we have a testing process in place that should allow us to keep schools open for our youngest and neediest children until the new vaccines end the pandemic, if all New Yorkers can come together and follow medical safety guidelines, ”said the teacher spokesperson highlighting the importance of COVID testing. “A key to this reopening was the UFT’s insistence on testing even more aggressive (20% of students and staff every week), even in areas that have very low levels of infection.”

Henry Chan, president of the group of doctors We are, who works in hundreds of places around the city to carry out the tests and has participated in the tests in schools, called on parents not to fall into the fear of thinking that they send their children to classes face-to-face will put them at risk.

“Schools are right now, according to City data, the safest place there is in New York. No place is so safe, because contrary to the increase and the high figures above 3% in infections in different parts, the schools have controlled and very low infections, ”said Chan.

Despite his reassuring message, the doctor warned that urges more and more children to be tested to ensure that they will not spread the outbreak.

“Schools are safe spaces, but we still need to do more testing, not just for them, but for their parents, grandparents and the adults around them. Children do not pose much danger with respect to COVID, but they can have it and pass it to their parents and if they have diseases like diabetes, it can be very dangerous. The key is proof, ”Chen added, calling on the City to keep in mind speak to immigrant communities in their language.

“Minorities need more information in different languages. Messages must be sent to larger communities, community centers and schools in multiple languages, as we have tried to do at SOMOS. And now that the vaccine arrives that will also be very important, educating in several languages ​​so that everyone can use it ”.

The Latin Pediatrician Denise Nunez, Also from SOMOS, he joined the message of safety in schools and said that the key to this new stage will be in communication between the different school levels and parents and children.

“First you have to stay calm, because nervous people are not going to think well. We must keep abreast of all official health notifications that are given, they should try to communicate with their pediatricians and think that if the children have everything in order, keep their distance and put on masks, the level of infectious disease will be low ” mentioned the doctor.

The medical expert added that the City “Must learn from their mistakes” and asked parents and teachers to be creative when educating children and adolescents about the use of the mask, not with impositions, but by making them see why they should have it.

Susana porraA mother of two fourth and fifth grade boys, who attend PS 11 in Manhattan, she was confident that the schools will keep New York children safe and was glad that her children have returned to face-to-face classes.

“We are going through a difficult stage throughout the city, but this school is always very clean, they do everything to keep our children well and the most important thing is that for their well-being, so that they share with others and learn better, we must send them to classes ”, said the Ecuadorian mother.

Fanny Rodriguez, who was also picking up her 7-year-old, also admitted that for “The mental health of children and parents”, It is better that they are in face-to-face classes than just remote, but she confessed that she is still not very sure that they are not a source of propagation.

“I think they are better at school than at home, because they will never learn the same on a computer as with a teacher, but I am still afraid that they will suddenly get sick and that the older ones in the house will get sick, but God first. Hopefully this nightmare will soon pass ”, said the mother.

Chancellor of Education, Richard Carranza, commented that of the schools that reopened, a total of 150 will have full days of 5 days with their students, as happens regularly, and warned that the goal of the City is that in addition to being safe spaces, soon all children can return to that scheme. At the same time, he admitted that remote classes or the hybrid system can generate difficulties at the learning level, but added that he hopes that soon everything will be regularized.

“I am very proud of our teachers in New York City because they are working so hard to intervene when they see that students are not doing well or are not doing as well as they can. So, we are being very active. But again, each phase of this pandemic has meant that it is an imperfect way of teaching and learning. And we can’t wait for us all to get back in person, 100 percent“Said the official.

The reopening of schools in NYC in data