It is common for new US presidents to add their personal touch to the White House Oval Office upon arrival. AND the changes Joe Biden made As soon as they arrive, they are a declaration of intent.

The president’s office, in the west wing of the White House, has been decorated with portraits and busts of some of the most iconic and influential leaders of the country’s history. 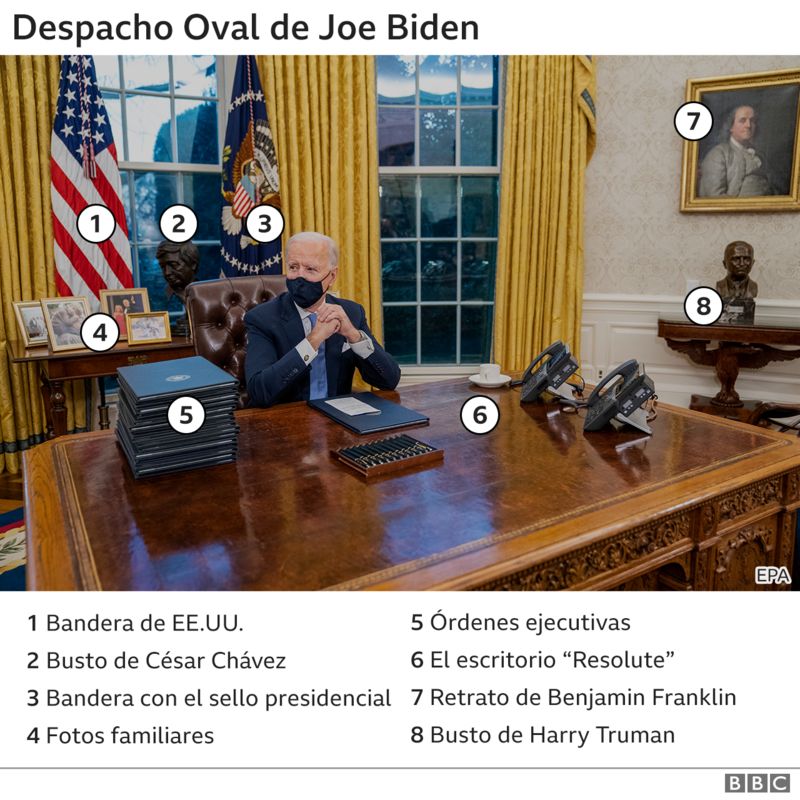 “It was important for President Biden to walk into an Oval Office that looked like the United States and began to give a vision of who he is going to be as president,” Ashley Williams, deputy director of operations of the Oval Office, explained to The Washington Post during an exclusive visit.

Gone was the portrait of Andrew Jackson, the 7th president of the United States and populist leader with whom Trump frequently identified and whose administration also faced disapproval despite never being the subject of impeachment (impeachment).

His portrait, to the left of the “Resolute” desk seat, was replaced with one of Benjamin Franklin, one of the nation’s founding fathers and a prominent writer, scientist, and philosopher.

The Post noted that Franklin’s portrait was intended represent interest of President Biden on trusting science in the fight against the coronavirus pandemic.

From his desk, Biden will look up and see, flanking the fireplace, busts of Martin Luther King and Robert F. Kennedy, two men whose impact on the civil rights movement is regularly mentioned by the president, according to the US press. .

Other busts placed in the room include that of prominent activist Rosa Parks.

Above the fireplace hangs a portrait of Franklin D. Roosevelt, the president who led the country through the Great Depression and World War II.

The painting of another former president, Thomas Jefferson, is accompanied by another of a man with whom he commonly had disagreements: the former Secretary of the Treasury Alexander Hamilton, a “symbol of how differences of opinion, expressed within the rails of the Republic, are essential for democracy,” the president’s office noted, according to The Post.

But if there is a detail that especially caught the attention of the public on social networks, it was the bust of the Hispanic union leader Cesar Chavez.

The bust of Chávez (1927-1993) can be found just behind Biden’s desk chair, on a table and in a privileged place: among numerous family photos.

Chávez, a native of Arizona, was the founder of the United Farm Workers union and one of the most important Latino leaders in defense of the civil rights of Hispanics and farm workers, mostly immigrants.

The activist made popular the cry of “yes, we can”, created by his union partner Dolores Huerta and that years later Barack Obama would adopt in his campaign for the presidency.

Another thing Biden broke with upon arrival was the golden curtains placed by Trump when he took office in 2017.

The gold has been replaced by curtains of a darker shade of that same color and blue, which adorned that same office when Democratic President Bill Clinton was in office, reports The Washington Post.

The flags of the different branches of the Army have also been replaced by the American flag and another with the presidential seal.

Biden also decided to get rid of a controversial bust of the British leader. Winston Churchill.

Trump had promised to return that bust to the Oval Office after it was removed by his predecessor, Barack Obama.

The then Foreign Minister Boris Johnson – now Prime Minister of the United Kingdom – then accused Obama of “having a ancestral dislike for the British Empire ”.

On this occasion, his spokesman moved away from the controversy: “The Oval Office is the private office of the president and it is up to him to decorate it as he wishes.”