Ninel Conde is reunited with her son

After a year and seven months without being able to see her son, Ninel Conde had her long-awaited reunion with Emmanuel. The singer is on trial for custody of the minor with her former partner and father of the child, the Mexican businessman Giovanni Medina.

On April 20, 2020, justice left the child in the care of his father, and although the custody trial is ongoing, the court authorized the minor to have visits with his mother every two weeks, for a period of three hours each a.

The 45-year-old singer has not commented on how her encounter with the boy was. However, Giovanni Medina visited TV Azteca’s studios to comment on the judicial resolution one day before the meeting took place.

“We are happy because, at the end of the day, when I talk about us I mean Emmanuel and me, we want to lead a healthy life, a harmonious life. And part of a healthy circle is living with both parents. I always pointed out that I was looking forward to that, but in the right conditions, there weren’t before. Today there are. I have decided not to appeal this decision taken by the authority because I consider it to be correct, ”said Giovanni Medina in statements given on the TV Azteca program Ventaneando.

Medina pointed out that the visits will take place in the home that he lives with his son in Mexico, and that a public authority will be present during the visits. “What the authority tries is that we create the bond between mother and child, that that relationship is created. I also requested that there be the presence of a public authority. I have to be there because I am the custodial parent and the meetings will be recorded, “he explained.

The businessman said that in the past he did not want to expose his son to visits with his mother because he could be in the presence of Tony Ramos. “If these coexistence had been imposed on me elsewhere, I would not have agreed because I do not know if that man (Tony Ramos) is hiding out there, close by,” he explained about Ninel Conde’s husband, who is wanted by the FBI for fraud crimes.

Regarding Emanuelle, Medina said that he is a very intelligent child, who plays sports and finds his mother very pretty, but that “the idea of ​​seeing her does not appeal to him very much.” Medina blamed Conde by arguing why the boy shows no interest in seeing the artist.

On how he felt about seeing Ninel Conde again when she visited the boy, Medina pointed out. “She will go to the house today, but she has me sued for moral damages and a complaint for psychomoral damages. As his lawyers do not charge him, he loves it, “he said after stating that he would treat the singer with the greatest of respect.

In past statements, Conde has expressed his sadness at not being able to be close to his son, showing how unfair the situation he is in, stating that Medina always threatened that he would not be able to see his son if they ended their relationship with couple. 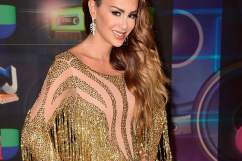