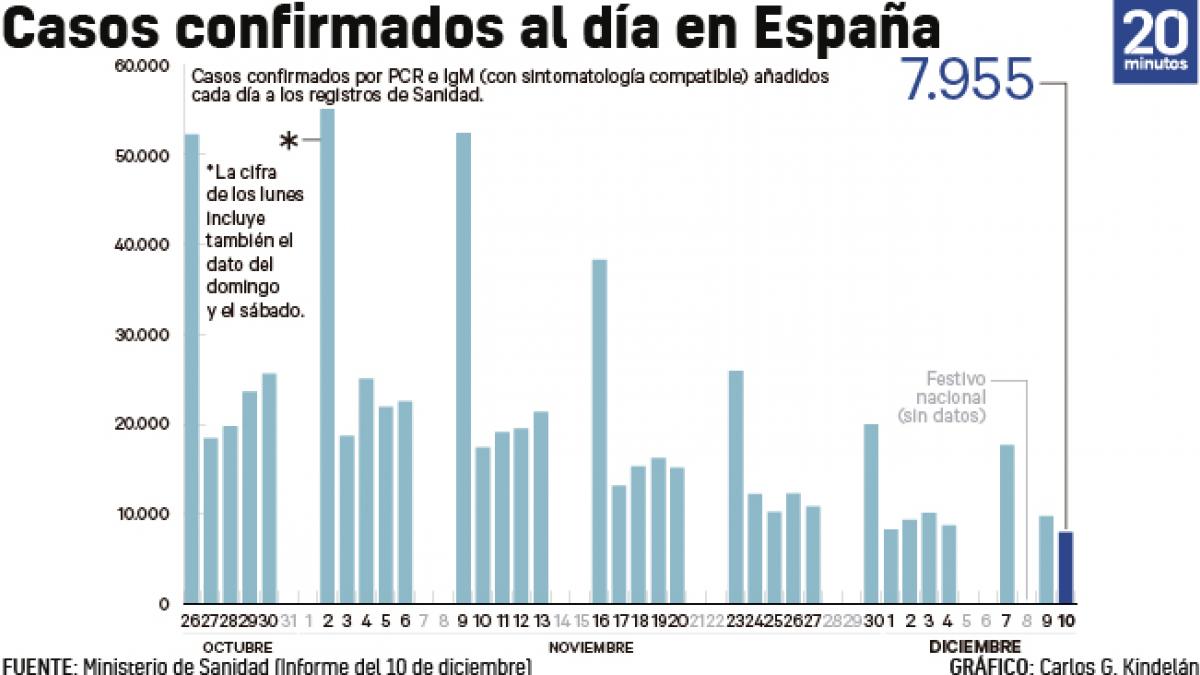 The Ministry of Health has reported 7,995 new infections and 325 more deaths on the first day that the bulk of the data does not come from a festive day, as was happening this week.

The almost 8,000 infections detected this Thursday have again dragged the accumulated incidence down, although the downward trend in this indicator -which has already accumulated a month without interruption- has slowed slightly. The accumulated incidence data in the last 14 days is 188.72 cases per 100,000 inhabitants, 2.35% less than on Wednesday, which represents the smallest daily decrease since November 17.

This contributes to up to four autonomies have experienced rebounds in the number of cases per 100,000 to two weeks. The Canary Islands (+ 3.7%) and the Balearic Islands (+ 2.1%), which have already accumulated several days on the rise, were joined this Thursday by the Valencian Community (+ 2.5%) and Madrid (+2.57 %).

It is precisely these last two demarcations that have reported the most cases to the department headed by Salvador Illa.Madrid reported 1,715 new positives, followed by the Valencian Community (1,695) and Catalonia (1,401), the only three regions with more than a thousand confirmed cases.

“We are not in a good situation. We are heading towards that point we want, but of course we are still with incidents well above what is desirable“, has valued Fernando Simón, director of the Ccaes.” Any mistake can involve exponential increases that are very difficult to control, “he added.

“We are starting to control it [la epidemia] before other European countries, but if we reach very low levels – and hopefully we will achieve them -, it will be very difficult to keep them for a long time“, has expressed the epidemiologist, who has cited among the risks the Christmas holidays, the effects of the bridge (which will be able to begin to value” next week “) and the lack of a massive vaccination.

Also, Simon has warned of the danger of a third wave unleashing before mass immunization can begin. “It is good that we are decreasing, but that puts us in a situation in which the probability of starting a third wave, although later it can be controlled when we start vaccinating larger population groups, we are at risk of observing it in our country, while what Countries that are longer behind may overlap sufficient vaccination before that third wave begins, “he said.

On the other hand, with regard to the situation in intensive care and hospitals in general, the number of admitted with Covid continues to decline slowly. Hospitalizations in the ward have fallen by 193 compared to Wednesday’s data and are below 12,000 admitted (11,965), similar levels to those of the end of October.

In intensive care, 2,158 patients with severe Covid remain in care, 21 less than the previous day, while the average occupation reaches 22.4% with seven autonomies still above the 25% threshold.