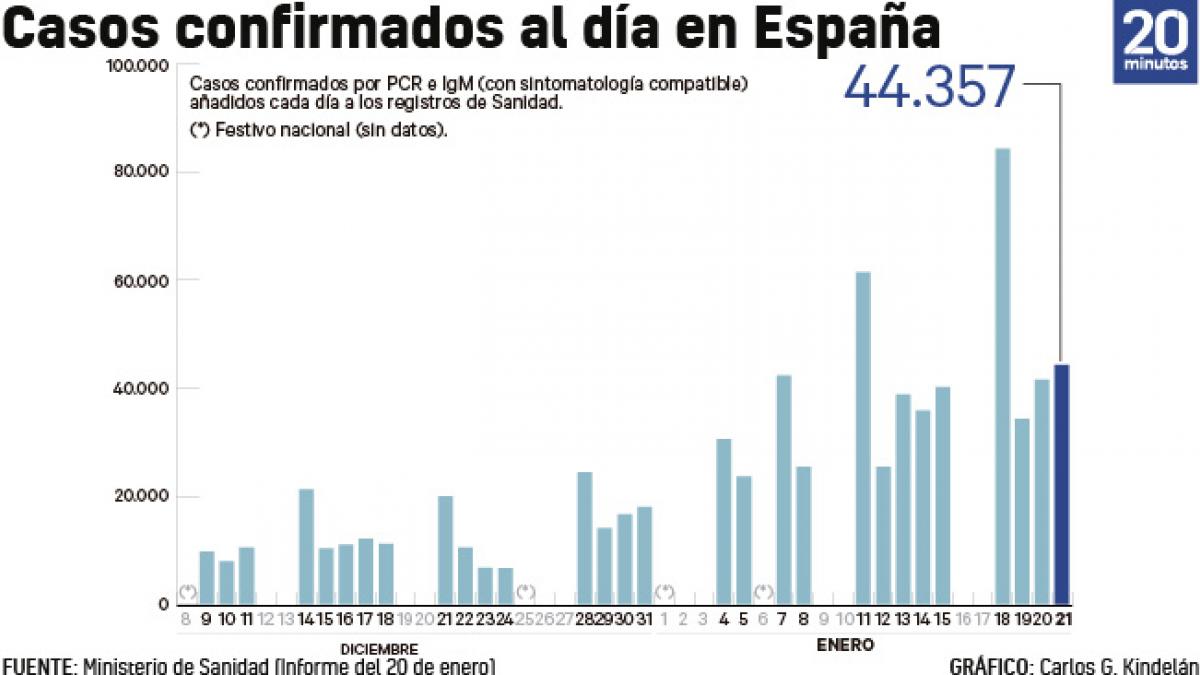 Daily positives for coronavirus and the incidence at 14 days continue to break records day after day, while the Ministry of Health insists that the transmission of the virus is slowing down and that we are in a “tipping phase.”

This Thursday, the department headed by Salvador Illa reported 44,357 new positives and 404 deceased by Covid compared to the previous day, which places this data of cases as the new maximum registered in the entire pandemic (although it should be pointed out that during the first wave most of the real infections remained undetected).

The territories that have reported the most new cases have been the Valencian Community (8,452), Andalusia (7,549), Madrid (7,097) and Catalonia (5,917), while in other five autonomies the positive ones reported exceed one thousand.

“The increases we are seeing are smaller every day, which implies that we are already in the inflection part, “Fernando Simón, director of the Ccaes, defended again this Thursday, insisting on a line that he already raised on Monday. This” phase “, added the epidemiologist,” could mark a clear turning point in the trend. “

“It gives the feeling, and yes that the data would indicate, that we would be in a phase of curvature. We do not know if we are already at the peak and beginning to descend or if we are just before the peak and beginning to descend, “the expert later commented.” We have to wait a few days for the impact to be observed. [en la incidencia a 14 días]”.

Simón is based on the evolution of the incidence at 7 days – which weighs more in the incidence at 14 when the trend is upward and less when it is downward – to support these statements. Although the infections registered in the last 7 days in relation to the population continue to increase, it is true that they do so more and more slowly. In fact, the weight of the last seven days in incidence at 14, which is the best known indicator, is getting smaller and smaller.

Last Thursday, 59.6% of 14-day infections had been recorded in the most recent week, while a week later this percentage stood at 50.4%.

However, whether or not we are really facing a slowdown in the epidemic and if that slowdown will be enough to round the curve, what is clear is that the situation in hospitals is not going to improve anytime soon.

This Thursday, the number of people currently admitted by Covid in Spain has grown back to over 1,000 in a single day for the fourth consecutive day this week, a level of increase not seen since the rise phase of the first wave. At the moment there are already 26,542 patients with Covid receiving treatment in Spanish centers, of which 3,734 are in the ICU.

The intensive care occupation continues without respite and it has increased to 36.3%, with more and more communities hovering around the 50% threshold. So far, only two autonomous regions have more than one in two ICU beds occupied by patients with Covid -La Rioja (60%) and Comunidad Valenciana (57.5%) -, but Catalonia (47.7%), Castilla -La Mancha (46.4%) and Madrid (46%) are getting closer and closer to this worrying proportion.