The twelfth season of Nuestra Belleza Latina reached Univision’s programming with the premiere gala that was broadcast on Sunday night, September 26.

Once again, the reality show is being conducted by the talented and charismatic Alejandra Espinoza. For its part, the panel of judges is made up of luxury personalities: Giselle Blondet, Adal Ramones, Jomari Goyso and Daniella Álvarez.

More than 6,000 Hispanic women participated in the virtual auditions of Nuestra Belleza Latina, but only eighteen managed to convince the judges during the face-to-face auditions during the first gala of the reality show.

In addition, three young people were tied during the face-to-face auditions in the city of Miami. However, only two of them will be able to continue in the competition thanks to the help of viewers in online voting.

In a daring nude-colored outfit, Alejandra Espinoza stole the audience’s attention during the three-hour broadcast of the premiere gala of the twelfth season of Nuestra Belleza Latina.

With their feelings on the surface, Daniella Álvarez and Giselle Blondet could not hold back their tears when they heard the life testimonies of some of the participants of the new season of the reality show.

Gabriel Coronel, one of the freshest faces on Univision, was in charge of interviewing some of the candidates behind the scenes on the first broadcast of Nuestra Belleza Latina 2021.

“The time has come to seek my successor and end my reign. Only a few elected come to fight for this crown, although today we are in a time full of uncertainty, we want to look to the future with optimism, because if there is something that we are very clear about; is that the search for the new queen begins now ”, affirmed the outgoing queen Migbelis Castellanos, during her participation in the first NBL gala.

Clauvid Daly, Lupita Valero, Raishmar Carrillo, Tanya Romero and Jennifer Chang are some of the young women who managed to convince the judges to earn a pass to the next phase of the competition. However, they have not yet secured one of the ten places in the mansion of beauty.

For their part, Alejandra Argudo, Thalía Lara and Karina Zevallos compete for a place in the next phase of the competition; this because they were tied in the round of face-to-face auditions.

The new season of Nuestra Belleza Latina promises to win over viewers by being a production loaded with diversity in which an all-round beauty queen is sought out who can inspire thousands of Hispanic women in the United States.

The candidates of the reality show will have to overcome endless challenges to conquer the audience and be able to become the new face in the programming of Univision, one of the most watched television networks in the United States.

Nuestra Belleza Latina will be on the air on Univision’s “Sundays in Family” programming. The galas will be broadcast on the television network every Sunday beginning at 8:00 PM ET. 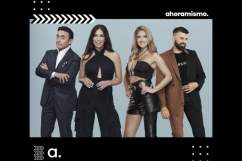 M. Night Shyamalan does not stop and works on his next film that has a release date | Entertainment