The third broadcast of Nuestra Belleza Latina 2021 was charged with great emotions, both for the participants and for the personalities that are part of the panel of judges of the Univision television competition.

Giselle Blondet assumed the role of presenter of NBL during the gala this Sunday, October 10, this because Alejandra Espinoza was absent from the show due to health problems.

“Our dear Alejandra Espinoza has had a health situation and at this moment, the most important thing is that she is fine and is at home, she is surely seeing us,” said the American star seconds before announcing that she had put on her suit as a host to support Espinoza as she has since she was crowned NBL 2007.

The panel of judges for the third NBL gala was made up of Jomari Goyso, Adal Ramones and Daniella Álvarez. For its part, Blondet could not evaluate any of the candidates for being a guest host.

The musical shows of the night were in charge of the Mexican group Banda MS and the Puerto Rican rapper Farruko.

The finalists of Nuestra Belleza Latina 2021 were surprised when they entered the Mansion de la Belleza and realized that the luxurious property was completely empty.

The talented and irreverent Amara La Negra surprised the finalists by announcing that they will have to overcome several challenges throughout the competition in order to start enjoying multiple amenities within the Mansion of Beauty.

Greidys Gil, winner of Nuestra Belleza Latina in 2009, made a special appearance at the third gala to surprise the candidates by announcing the challenge of the week, which consisted of reports on fires or hurricane seasons in the state of Florida.

The award-winning journalist Marie Antoinette Collins was in charge of meticulously supervising each of the candidates on the set of recording the reports. However, the final evaluation was in charge of the judges.

Honduran Sirey Morán managed to become the competitor with the most outstanding report in the challenge of the week, for which she was awarded thirty minutes of free use of her mobile phone.

The Cuban Fabién Laurencio de la Concepción was selected as the tenth finalist of NBL 2021, this after being saved by the vote of the viewers who considered that she was the most suitable candidate to continue in the competition.

De la Concepción said that she dreams of becoming the new queen of Nuestra Belleza Latina, a triumph that would allow her to fill her family members, who currently reside in Cuba, with joy and enthusiasm.

Migbelis Castellanos, current queen of Nuestra Belleza Latina, announced that weekly a former queen of the competition will be a guest at NBL 2021 to announce “The Queen’s Challenge”, whose purpose is to test the artistic abilities of the ten participants.

To end the third gala of the reality show, Giselle Blondet announced that all the candidates are in danger of elimination after not fully convincing the judges with their news reports.

The names of the finalists of Nuestra Belleza Latina 2021 who will leave the competition will be announced during the gala next Sunday, October 17. 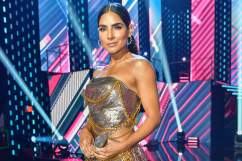