Our Latin Beauty 2021: What time does it start?

Univision Find out what time the broadcast of Nuestra Belleza Latina 2021 begins.

Today, Univision will broadcast the premiere gala for the new season of Nuestra Belleza Latina. The famed television network will begin broadcasting at 8:00 PM Eastern Time.

Unlike previous years, the auditions of Nuestra Belleza Latina on this occasion were held virtually with the participation of more than 6 thousand women from various states of the country.

With a stellar jury and classic challenges, the new season of Nuestra Belleza Latina will be the most demanding job interview on television. In the end, only one contestant will win the top prize: Being the new face of Univision.

Alejandra Espinoza, a popular Univision figure and the first NBL winner, will host the iconic show. Actor Gabriel Coronel, who appeared on Univision’s “Tu Cara Me Suena” last year, will be the behind-the-scenes reporter and will introduce fans to all the action before, during and after each gala.

Amara La Negra, singer, model and actress, will make her debut on the show as “host of the mansion” and will make special announcements, bring guests and present many surprises every week. The current NBL winner, Migbelis Castellanos, will return to the show as a digital reporter and will also be a special contributor on “Sal y Pimienta,” the post-show for “Nuestra Belleza Latina”.

The new season of Nuestra Belleza Latina will air every Sunday on Univision starting at 8:00 PM ET.

A Univision representative announced in a press release that Nuestra Belleza Latina is expected to continue breaking stereotypes of female beauty in society.

“The show will continue to break stereotypes of female beauty in society and empower Hispanic women in what will be its most diverse season to date. We will also present new talent, who, alongside popular NBL personalities, will guide the contestants during their experience on the show, ”said Ignacio Meyer, Executive VP of Non-Scripted Music and Entertainment for Univision Television Networks Group.

According to a study by Nielsen, the eleventh season of Nuestra Belleza Latina, broadcast in 2018, broke audience record as one of the most viewed entertainment programs on Sundays.

Last season of NBL (September 23, 2018 – December 2, 2018) had an audience of 15.8 million Total Viewers 2+ and during its first broadcast it was in first place among series and reality shows on all television, regardless of language , in prime time among Hispanics and bilinguals in the United States.

Nuestra Belleza Latina was also the number one entertainment program, regardless of language, among Hispanics in the United States, every Sunday night. 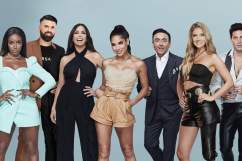