First time they played together in the Ryder cup and they did it against the theoretical best American couple, but this Friday at the Whistling Straits from Kohler (Wisconsin) Jon Rahm and Sergio Garcia They did not fail in the forecast and added the first point for Europe by winning the morning foursome by 3 and 1 against Jordan Spieth and Justin Thomas.

However, the Spanish could only save the European honor with the other three duels of the morning resolved clearly for the Americans and thus the morning foursomes day ended 3-1 in favor of Steve Stricker’s team USA.

The Castellón, record points in the Ryder with 22.5, therefore added one more and with this victory equaled the 23 in total of the British Nick Faldo, leader of this statistic until this Friday.

The 1st day of the Ryder Cup, in images TANNEN MAURY / .

It was a very tough game for the Spanish couple, who started losing but two birdie putts by Basque Jon Rahm on holes 3 and 4 turned the score around, they only saw how the Americans tied them at 5 and from 7 on he returned. the Hispanic duo to get ahead to close the first nine holes two up.

A great birdie in 10 put them three holes ahead, there was some suspense in 13 when Spieth and Thomas cut, but again Sergio, at the peak of the game, when it was time to stop the Americans, holed a putt of those that hurt at 15 when they had the ball much closer, and again they put the 3 up with three to play. The sentence came on 17, a spectacular par 3 by the sea.

“The Americans have played very well but I had the number one in the world next to me and that’s very easy, I felt very good throughout the lap and Jon’s has been incredible, making the two putts I had to make. We have. he had to play very well and logically we ended up very happy, “said Sergio from the foot of the green. 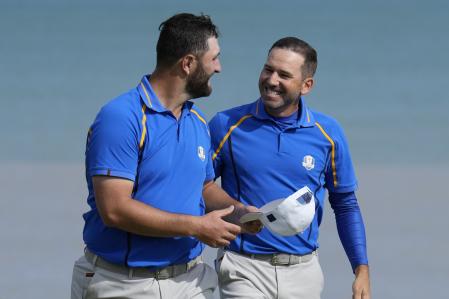 “I have had a great time and I think he has also had a great time. It was nice, we got on very well and we encouraged each other very well, which is always important. The truth is that for me it has been a pleasure and something that we both had to gain from doing, ”García added with satisfaction.

“There have been moments, although I think the key hole of the day was hole 7. Knowing that Justin Thomas doesn’t hit the shot he wants, but he gets a great result and Sergio hits a punch and I put the putt. Winning the hole in that way is a moment that changes the dynamics of the day, ”said Rahm, recalling the moment of the return from which the Spaniards increased their advantage.

Minutes later, however, came the three American victories, those of Collin Morikawa and Dustin Johnson over Paul Casey and Viktor Hovland, by 3 and 2, that of Patrick Cantlay and Xander Schauffele over a discreet and hesitant Rory McIlroy and Ian Poulter, for 5 and 3 and, finally, that of Brooks Koepka and Daniel Berger against Lee Westwood (did not put a putt) and Matthew Fitzpatrick, by 2 and 1.

In the fourballs of the afternoon session, there will be a European reaction but if the conditions are the same as in the morning, no wind and open field, with hardly any rough, the Americans can open even more gap.