The 22-year-old artist, whose first name is Bryant Rohena Pérez, was apprehended while on his way to board an American Airlines flight to Miami, FL for the recording of a music video. According to police reports, the rapper was carrying in his luggage “a magazine with 9mm caliber ammunition”, firearms and cannabis that he forgot to remove and did not report before boarding the plane as required by federal security regulations. As reported by Remezcla, the musician has a weapons license and his legal representative, Edwin Prado, said in an interview that Myers “is licensed to consume medicinal cannabis.”

The artist addressed the issue when leaving the airport after his arrest, calling the situation “a bad time.” “We are fine. No, it was really a bad time, I got involved there I forgot that, but you already know the better and the line too, “he told the media as he left the airport.

In June 2018, the interpreter of “Triste” was the victim of an express kidnapping with his mother in Carolina, Puerto Rico. According to the police report, Pérez had just played a basketball game when he got into his truck with his mother and they were intercepted by four armed thugs, Univision.com reported. After trying to take Myers alone, his mother, María Pérez Díaz, got in the way and they ended up taking them both away in a waiting car. The commotion caused caused the residents of the neighborhood to call the authorities, and shortly after making their escape the officers managed to reach the car. When they were cornered, the criminals were involved in an “exchange of fire” with members of the Carolina Municipal Police, Myers took the opportunity to abandon the car, and the kidnappers fled on foot through a wooded area. Myers’ mother remained unharmed.

“I do not wish it to anyone. Thank God everything is fine, “said the artist in an interview with Primer Impacto a few weeks after the incident.

By August 2020, five subjects linked to the artist’s kidnapping had already been identified, arrested and charged, reported the Noticel media outlet.

The terrifying experience forced the artist to leave the island for a time in search of safety. 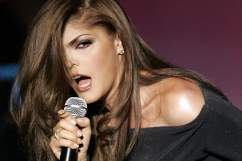