Sandor Martín has earned a place in the Olympus of Spanish boxing by imposing with authority and merit at dawn this Sunday the star Mikey García at his home in Fresno by majority decision after an exhibition (95-95, 93-97 and 93-97).

It was the most important fight in the career of this Catalan prodigy who already dared to measure himself with kids much older than him in his childhood and who has always grown up in an environment linked to boxing as the son of his coach Rafa Martín (owner of the emblematic Barcelona gym KO Verdún) and Inma Clemente (owner of one of the best boxing shops in all of Spain).

‘Arrasandor’ has been a three-time European super lightweight champion, in addition to multiple titles of the European Union, Spanish or even world junior category. In fact, he has left the continental belt of the EBU to engage in this fight against one of the important fighters in the past decade worldwide.

Mikey has been world champion eight times in four different weights, something that They have only overcome five myths such as Manny Pacquiao, Oscar De La Hoya, Tommy ‘La Cobra’ Hearns, Ray Sugar Leonard and Floyd Mayweather. The American of Mexican origin has 40 victories (30 by KO although the last one dates from 2017) and a defeat in 2019 against Errol Spence Jr for 38 wins (13 before the limit) and two defeats of the Catalan.

The fight was agreed at welterweight at 145 pounds (65,800 kg.) And both gave a very similar weight on the scale with minimal superiority for Sandor despite having had to gain weight: 65,100 for ‘Mikey’ and 65,300 for Sandor. Accompanied by his father Rafa and Rafa Valle, the former Spanish and European champion presented himself safely in the ring to the rhythm of ‘Volaré’, by the Gipsy Kings… The die was already cast.

Without forgetting that it seemed impossible to win on points in someone else’s ‘show’, Sandor began occupying the center of the ring and placed two lefts and a good right in the body of a very cautious Mikey who missed his first big attack and began to accelerate actions in the second with two good lefts just after the power went out for a few moments.

In the third, the Barcelona player even accepted a couple of exchanges while trying to play as a left-handed man with a great right counter to stop one of the best fighters of the past decade. And in the fourth he found a good right again without receiving blows to stay ahead in the fight.

Out of the distance due to the great work of the Spanish, Mikey went to the ropes to try without success in the short, although that assault could escape. Mikey tried to lead more in the sixth, but he could not penetrate the defense of his rival and the fight was in full swing with four rounds to go. 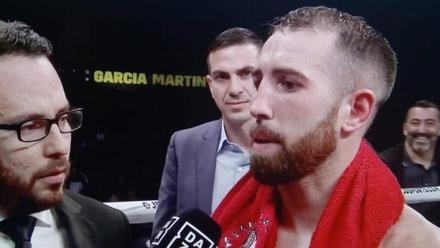 The seventh was a masterclass by Sandor, with several rights and some dodges ‘in the Mayweather plan’ before a former world champion who could not find his place despite raising his fist after the ringing of the bell. And in the eighth he was like a champion, finishing with a right hand and a combination. You only had to fear the powerful ‘punch’ of the American and the judges, the three Californians like him.

In the ninth Mikey tried to go to war and found a cheeky rival who accepted it again and put up two extraordinary straight lefts. Either there was a KO, or there was a robbery or Spanish boxing was about to experience a historic moment.

And on the tenth it got even bigger, right down to the last second, accepting the head-to-head in the skins and coming out while striking in a typical action of a genius like Roy Jones Jr. DAZN expert Chris Mannix’s corner reflected a 93-97 for Sandor, but that cardboard is not the three that are worth.

And this time on Thursdays they did justice despite the fact that the 95-95 of the first card caused doubts. The other two gave 93-97 for the Spaniard, who fulfilled a dream he had pursued since childhood. It’s Sandor time. !! Congratulations!!