AB Quintanilla in real life and in the Selena Netflix series

Selena Quintanilla Pérez’s brother, AB Quintanilla, continued his musical career after the untimely death of his sister. He is now one of the many family members featured in the new Netflix series, Selena. This is what AB Quintanilla is doing today.

Abraham Quintanilla was a member of the original group Los Dinos in the 1960s, but Selena brought the new group to fame when it became Selena y Los Dinos, reported The New York Times. Selena’s sister Suzette was on drums and her brother, Abraham Quintanilla III (more commonly known as AB Quintanilla) was on bass.

Today, AB Quintanilla is a musician, composer and producer and has been involved in music since the death of his sister. In 2016 he formed Elektro Kumbia and signed with DEL Records, releasing the single Pina Colada Shot in 2017.

In 2017, he was “wanted” for non-payment of child support, but later released for lack of evidence

Quintanilla has eight children, People reported in 2017. He was listed on Nueces County’s 10 Most Wanted People in August 2017, People reported, due to lack of child support payments.

At that time, his father Abraham Quintanilla wrote on Facebook: “For all those who were misinforming on social media that AB was in jail for a long time, NOT TRUE, he is at home enjoying some tacos. It is very clear how you discover who your true friends are and who your enemies are. I’m keeping a list. “

AB Quintanilla said about the arrest: “Seven children of different women and two married couples. Why is it that only one [mujer] is he doing this to me? … I don’t deserve anything that is happening to me ”.

He is very close to his family

Suzette Quintanilla, Selena’s sister, has a very close relationship with her brother and sometimes posts about him on social media.

AB Quintanilla posts about his love affair with Anjelah, which is still going strong.

In April, he gave a live concert on Facebook and Instagram to celebrate his sister Selena’s birthday, the Caller Times reported. The performance was also organized to support St. Jude Children’s Hospital.

He and his band were also going to perform at the Selena XXV tribute concert at the Alamodome, but that concert had to be canceled due to the pandemic.

Suzette Quintanilla released a statement on the decision, writing: “After carefully analyzing the options available during these difficult times, we have made the decision to cancel the Selena tribute concert, SELENA XXV. This was a very difficult decision to make. The future is unpredictable and we feel we cannot responsibly create an event of this magnitude for fans. Thanks for your understanding. We would like to thank all the essential workers and all the people who have worked hard for the good of all of us. We must make sure that we are all doing our part to keep our neighbors safe and sound during this time. “

This is the original version of this story on Heavy.com 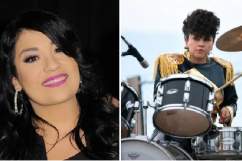