Star Wars fans propose that a What If…? of the saga – .

This year Marvel Studios was not intimidated by the pandemic – although it honestly did make him see his luck like many others -. Although its movie releases were delayed, the debut of Disney Plus was the perfect time and place to launch its original series as branches of the Marvel Cinematic Universe itself. Taking the first step with well-known characters on WandaVision – 95%, Falcon and the Winter Soldier –

96%, live-action stories took a break by giving way to an animated proposal.

84% do not exactly follow the style or goals of the first shows, which basically work to open the doors to Phase 4 of the MCU. In this case, alternate realities about each of the superheroes are explored, such as the fact that Agent Carter had undergone the super soldier serum procedure instead of Steve Rogers, or that King T’Challa led the Guardians of the Galaxy and even the arrival of known characters, now as zombies.

This series is about to end its first season to soon give way to Hawkeye with Jeremy Renner and Hailee Steinfeld; But all those who were delighted and grateful to be able to witness these alternate realities have begun to wonder if it would be possible to see similar things with other major franchises. The one they have in their sights is Star Wars, which has everything to be able to develop similar stories, without forgetting that Lucasfilm also belongs to Disney, so it would not be difficult for it to happen.

Some fans of Star Wars: Episode IV – A New Hope –

93% have used Reddit to make their own proposals, and there are even those who say that it would be the perfect opportunity to improve what was raised in the last trilogy started with Star Wars: The Force Awakens –

92%, who had quite contrasting comments. This adventure on the net began with the publication of u / Experiment_Magnus a couple of days ago.

I really wish Lucasfilm would do this … 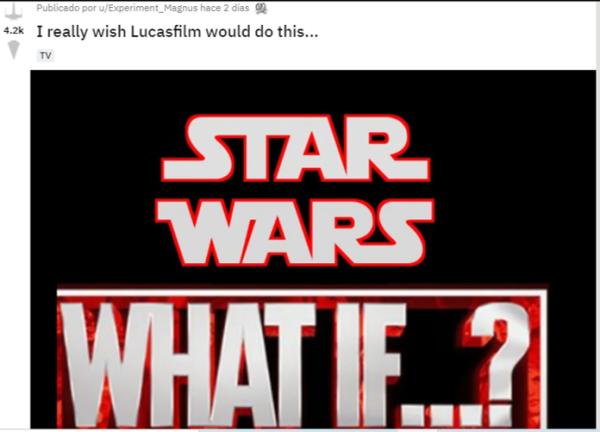 This would be a dream come true. What would happen if…? Anakin defeats Obi Wan. And yes: Mace killed Palpatin. What if: Luke and Leia never know [hubieran] separated.

What if Leia stayed on Tattooine and Luke stayed on Alderrean?

What if the clones never made order 66? What if Ashoka never left the Jedi order? What if yoda won the Senate chambers and went all out against palp?

What if Qui Gon survived? What if Anakin killed Obi on Mustafar? What if Mace killed Palpy? What if the Queens ship was never hit and they never went to Tatooine? What if Rey took Kylo’s hand? What if Maul killed Ahsoka? […] What if Luke and Leia switched when they were orphaned? What if Fives exposed Order 66? What if Ahsoka was actually a good friend? 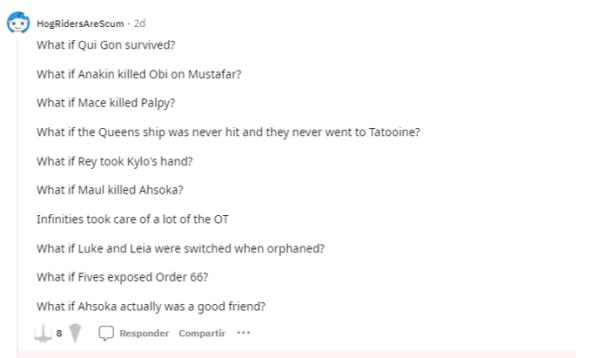 On the other hand, there were those who considered that perhaps the formula would not work because it does not have a multiverse, while others pointed out that it is not strictly necessary that it follow exactly the same Marvel formula for it to work.

It doesn’t have to be with the concept of the multiverse. It would be considered non-canonical. I don’t know why many people think that it is supposed to follow the same formula that Marvel is doing.

There were also those who compared What If…? with Star Wars: Visions –

100%, however, this new animated series is far from the Marvel style since it proposes new stories and characters different from those already known, making it a non-canonical program. Meanwhile, both series are available on Disney Plus.