Since the launch of Super Smash Bros. Ultimate For Nintendo Switch in 2018, users spent more than 2.2 billion hours on the various modes of the game, with 11.7 billion offline battles and 7.8 billion online multiplayer battles. This star-studded game has also welcomed numerous additional fighters, stages, and legendary music themes from gaming history, thanks to the rich and comprehensive downloadable content of the Super Smash Bros. Ultimate Fighters Pass *.

On October 19, a cherished hero from the gaming world will take his place alongside fighters such as Mario, Zelda, PAC-MAN, Sonic, Snake, and Cloud, marking the latest addition to this historic roster of characters.

In the video presented by Masahiro Sakurai, the director of the Super Smash Bros. series, it was revealed that Sora, from the series KINGDOM HEARTS, will be the last downloadable fighter to be added to Super Smash Bros. Ultimate, thus completing an extraordinary journey lasting almost three years, in which prominent characters from the history of video games have joined the roster of fighters. Sora is part of the contender 11 * DLC pack, which also includes a new stage and a selection of music tracks from the KINGDOM HEARTS franchise. The video has shown in detail the attacks of the new fighter, as well as the new scenario: the Hollow Bastion.

The full presentation is available here.

Sora, the protagonist of the KINGDOM HEARTS series, is a young man who wields the iconic Keyblade and travels through different Disney and Pixar worlds, while facing enemies known as “Heartless” to defeat the darkness and restore peace. to the worlds. His distinctive appearance and aerial movements that he boasts in the KINGDOM HEARTS games have been seamlessly carried over to the battlefields of Super Smash Bros. Ultimate, making Sora an easy-to-handle fighter with a unique twist.

Sora’s attacks in Super Smash Bros. Ultimate are inspired by those he uses in KINGDOM HEARTS, so he excels in aerial combat. He can jump very high and his movements are very light. Although easy for opponents to throw, the powerful attacks and combos that Sora can execute with the Keyblade make him a formidable opponent.

Through different combinations of buttons, Sora will perform different combos with the Keyblade, whether they are direct attacks, movements in the air or side smash. You can also resort to Magic, as in KINGDOM HEARTS. Fans will enjoy the familiar Pyro ++, Electro ++, and Ice ++ spells, which can be executed in a variety of ways to cover the battlefield with impressive attacks. On the other hand, Sora’s Final Smash is called “Sealing the Lock,” which throws opponents into the air.

The new scenario included with Challenger Pack 11 is Hollow Bastion. Fans of the KINGDOM HEARTS series will instantly recognize this familiar location, which appears in many games in the franchise. This dynamic setting consists of a platform in the center and as the end of the fight approaches, players are transported to a special “Descent to the Heart” inspired area, with images showing some familiar faces from the KINGDOM HEARTS series.

Upon downloading Challenger Pack 11, players will also receive nine music tracks from the KINGDOM HEARTS series. Additionally, users who have played KINGDOM HEARTS Melody of Memory will receive the Dearly Beloved -Swing Version- theme. A new spirit board will also be added starring KINGDOM HEARTS characters like Riku, Kairi, and Roxas. Finally, new paid costumes for Mii fighters will be available, including the DOOM Slayer, an Octarian hat, and a Justin hat, sold separately. 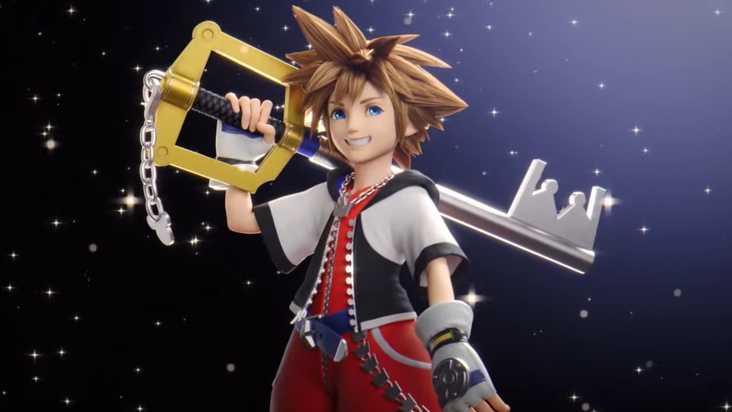