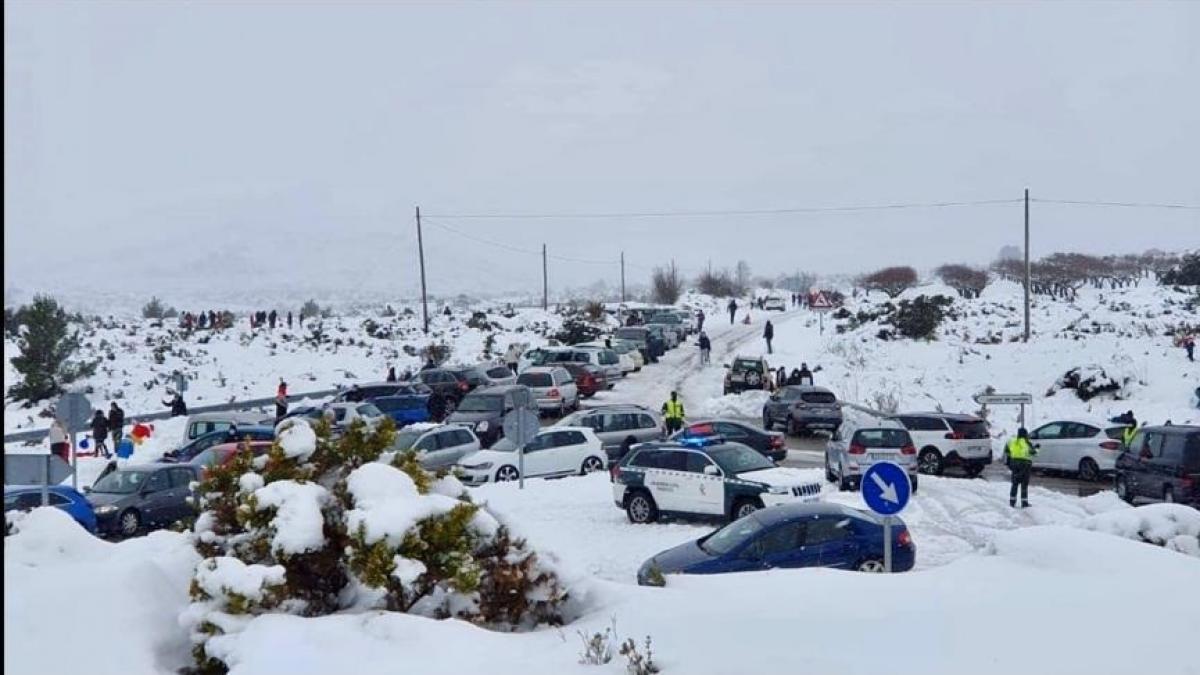 In the last 24 hours, members of the Civil Guard have provided a “multitude” of aid and support to vehicle drivers who have had various incidents on the roads and who they had gone to visit areas with snow, especially from the province of Castellón.

Despite the recommendations not to visit these areas or drive with private vehicles on roads affected by the storm, there have been numerous incidents related to the arrival of visitors which has hindered the work of highway, emergency and civil guard personnel, according to the balance of 7:30 p.m. provided by the Government Delegation.

Likewise, on the afternoon of this Sunday no truck remains detained on the roads of the Valencian Community due to bagging. The Civil Guard has proceeded to disburse during the first half of the day the trucks that remained held on the A-23, the last that remained, in small convoys.

Subsector patrols have periodically informed truckers of the reasons for the restrictions on the movement of heavy vehicles. The decision was made because the roads in the neighboring provinces and Madrid were at the red level of circulation and there was an extreme risk of being blocked on the roads, with a consequent danger for the trucks due to the lack of supplies and the difficulty of operating the snow plows on the road.

In addition, the Armed Institute has been forced to deploy a special device to attend to incidents that have arisen by users who have approached the snow areas.

The Civil Guard has acted throughout the day to correct some infractions in terms of road safety, due to improper parking or impeding traffic. Early this Sunday, the Delegation and Civil Guard they agreed to close all the avenues deemed appropriate so that recovery, road maintenance and emergency work could be carried out without incident.

This Sunday, the Civil Guard of Castellón has made vehicle returns at km 40 of the N-232, towards Vinaroz. One of the patrols has been established at the junction of the N-232 with the CV-128 (Catí highway).

In addition, several snow plows were out of service due to vehicles accumulated in the Sacañet and Teresa road. The CV-166 (access road to the town of Benassal) has also been cut due to the massive influx of vehicles and people and a patrol has gone to Ares del Maestrat after the City Council requested collaboration for the same reason. The opening of roads has been staggered.

In Alicante, the CV-800, PK has been closed. 18 (Xixona) and 35 (Ibi). On the CV-780, with red level and cut from Jijona, between 30 and 40 vehicles have been accumulated that have been forced to turn around. However, the entire section of the A-31 highway is in good condition and there are no restrictions on traffic.

In Valencia, more than 10 kilometers of retentions on the A-3 (Km. 297 to 315) and the Civil Guard has cut off the passage to avoid crowds and keep the roads clear for safety.

The members of the citizen security area of ​​the Civil Guard of Castellón have assumed road services on long-distance main roads and relief work and support on local roads to small towns, vulnerable groups, farms or sick people. Total, more than 100 Civil Guard patrols, with 230 agents, they have been operational in the last two days in the Region.

In Alicante, the demarcation carries out preventive treatments to avoid the formation of ice sheets. In Castellón, the main problems are in the N-232 in the surroundings of Morella and on the A-23 on the way up to Barracas. Both pushing machines and preventive equipment work in this area.