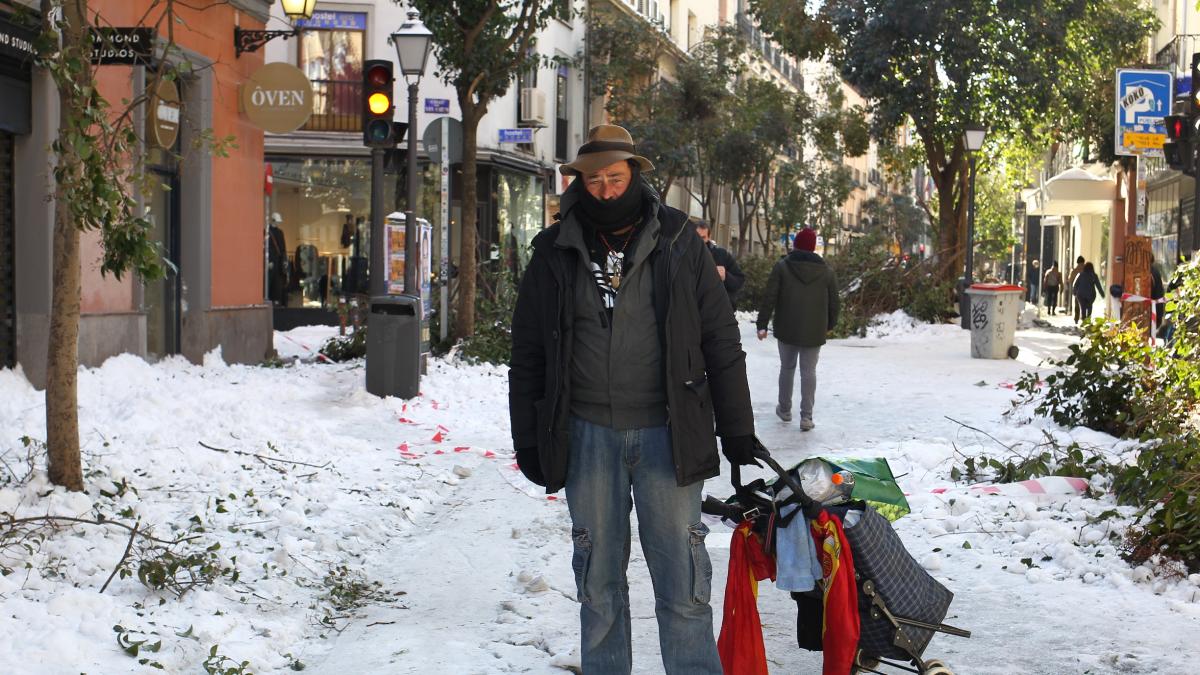 At 8.15 am Gerardo has a hot drink in a cafeteria near the Madrid Diego de León station. Embrace your cut with your bare hands. He is not wearing gloves and the thermometer reads 7 degrees below zero, but for this German the worst is over. “I have slept there,” he indicates to a nearby parish. “First I put three cardboard underneath so that the cold did not enter and then I got into two sacks. “And he shows his satchel.

The truth is that Monday night has been the coldest of the last almost 60 years. In some provinces of Spain the thermometers have reached 25 degrees below zero. This is the case of Teruel. In Ávila, temperatures dropped to -16 ºC, in Valencia to -15 ºC, and in certain parts of the Madrid region, to minus 14 degrees.

Gerardo had been listening to the data days ago. You are informed thanks to a small radio that he always carries with him. Not even the warnings of the Aemet have managed to go to a shelter. “I only went once and never again: there is a lot of drugs and they steal; not a worthy site for me“, he concludes.

Next February will turn half a century of life … and six months on the streets. He was working as a temporary worker in Andalusia and came to Madrid before the pandemic. “Now I have been trapped here because without the paper – safe conduct – they do not let me travel.”

Since then, he has been looking for a different shelter to spend each night. “So nobody knows where I am and they don’t rob me“He says. For Gerardo this is the best option.” They have told me that now you can sleep in the subway, at the Estación del Arte, right? “This is precisely one of the resources that the Community of Madrid has enabled so that Samur Social can serve the homeless during the cold wave. Since last Saturday the stations of Latina, Ópera or Tirso de Molina have also been open for this work. But “what good is a place where I can’t sleep? For that I go to an ATM, I prefer the cold “, Gerardo insists.

At 10:00 am, the volunteers from the parish where he spent the night begin to distribute breakfasts. Antonio sits on the bench opposite. He is 77 years old and, despite having spent his childhood in the Sierra de Granada, “he has never” seen “a snowfall like it.” He also jokes, sipping the juice. “I’m ashamed that that sparrow – look at the tree – can stand the cold and I can’t.” Antonio also does not want to know anything about the social centers, although, unlike the German, he usually repeats location. “I have slept in a hall near the church.” He has done it under blankets and some cardboard that he found. “At first the blankets were very cold and, well, then little by little I have warmed up.” This is how he recounts what has been his “coldest night”, as the next he will spend in a sack that the church volunteers have just given him.

Solidarity extends to other parts of the city. “A neighbor gave me three blankets yesterday.” Daniel, who now travels the streets of Tribunal with his cart, has spent the night in the corridors of the suburban at Banco de España. “It was very cold”, points out the man of Romanian origin.

Gerardo, Antonio and Daniel are only three of the hundreds of homeless who spend the night in the Spanish streets in the heat of the cold wave. In Barcelona, ​​just two days ago, two homeless people aged 32 and 37 died of hypothermia. Local administrations work to offer as many places as possible, expanding, for example, their cold campaigns. In Madrid they have enabled extra places beyond the usual network and the cold campaign. The total number of accommodation places in Valencia, with Operation Cold active, amounts to more than 300: 192 in shelters, 40 in the new Ciutat Vella shelter, 66 in homes and 41 in the Climatic Emergency Center.

In Seville, in addition to the 547 winter parking spaces, there are others available in hostels throughout the city. In the Catalan capital, the City Council has set up 2,700 places in municipal facilities to accommodate homeless people, and with the cold wave it opened 100 more places. At dawn on Tuesday only 34 were occupied, according to municipal sources.