“The House of the Famous”: Nominees – September 30: How to vote?

This week’s nominees for “La Casa de los Famosos” were Verónica Montes, Manelyk González and Celia Lora. It is the first time that the group of personalities in danger of elimination is completely composed of women.

Manelyk González is in danger of elimination for the first time since he joined the group of participants of the Telemundo reality show last Wednesday, September 22.

It is the fourth time that Celia Lora is part of the group of celebrities who are in danger of elimination in “La Casa de los Famosos”. Unlike her partner Verónica Montes, who on this occasion is nominated for the first time since she entered the Telemundo television project.

In a brief 30-second participation from the privacy of the confessional, Verónica Montes, Manelyk González and Celia Lora had the opportunity to address viewers individually to convince them to allow them to continue in “La Casa de los Famosos”.

“I want to be at home because Mane has just arrived, whom I love very much, and I want to have more fun since I finally feel very good in my tooth. I want to continue being with Gaby, Vero and Gisella; and try to make them laugh more and get to know me more obviously, “said Celia Lora when addressing the audience.

“I want to stay at ‘La Casa de los Famosos’ because they have known very little about me. I know that I have many people and many little birds who want to see much more of Manelyk because I am the cherry on the cake, because I am super fun and so that they have an eyeball every morning and every afternoon with me, ”said Manelyk González.

Enter the voting section of “La Casa de los Famosos” on the Telemundo website, select the participant’s photograph you wish to delete and press the vote button. You can vote fifty times a day, either for the same participant or by combining the votes with the rest of the famous people in danger of elimination. If you wish to vote, you must do so exclusively through the Telemundo website so that your vote is totalized by the production of the reality show. Week by week, the voting and elimination process is the same, so you must follow the same steps to vote for the various personalities who will be in danger of elimination.

Know the rules to vote in “The House of the Famous”

Within the voting period, you can vote every Thursday between the hours of 8:30 PM and 9:00 PM ET until the following Monday between the hours of 8:30 PM and 9:00 PM ET. Voting to remove a participant from “La Casa de los Famosos” is open exclusively to residents of the United States. Votes from other countries will not be counted. Any attempt to exceed the number of votes assigned per day will not be counted: Fifty times from the same computer or smart device. Voting online is subject to standard internet access charges. If you navigate to the voting page online or via mobile phone, data rates may apply. By voting, you agree that you will not use any unofficial third party service to cast votes on your behalf. Telemundo reserves the right to disqualify, block or eliminate any vote of any person who votes through electronic, mechanical or automated means, or who manipulates the voting process in any other way. Telemundo is not responsible for damages caused to voter devices that may arise from the use of the voting service. Telemundo reserves the right to modify the reality show voting or contest rules, the official voting rules, and the terms and conditions of this voting process at any time in its sole discretion. 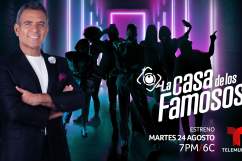