The most surprising gadgets at CES 2016 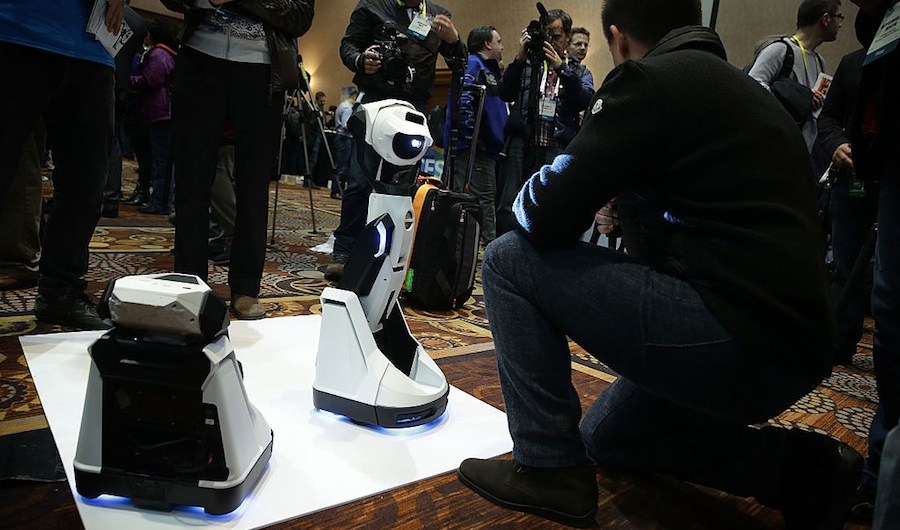 The Tipron domestic robot is more than a robotic piece, this gadget is a kind of automatic butler (Alex Wong / .).

(CNNExpansión) – From shoes, to the alarm clock, a musical instrument or a remedy for nausea can be connected to the internet, or at least that’s how the dozens of startups and technology firms that showed their most recent innovations to the media during the first CES 2016 exhibit.

Through Wi-Fi or bluetooth connections, the firms showed novel applications of the Internet of Things (IoT) trend that, although it has been on the market for a couple of years, is only now when it begins to see the variety of applications that are already ready to go to the market and even already generating sales.

Virtual reality, as well as gadgets focused on entertainment and health care, increased their presence at the event and promise to hit the shelves throughout 2016.

These are the gadgets that promise to improve everyday life during 2016.

The smart piano: A piano that teaches you to play is the product that the company The One Music Group, founded in China and based in San Francisco, presented this Monday. The piano keys light up as the score progresses, which is downloaded from an application to one of your gadgets. The piano allows the learner to record what he has played and share it on social networks. At the moment it is only for sale in the United States and China through the smartpiano.com portal, but the company seeks to expand its sales to other countries this year.

Butler robot: Tipron, is more than a robotic piece, this gadget is a kind of automatic butler. The domestic robot of Japanese origin can move autonomously in a closed space and through a camera projects any Internet content in some space of the house. The content is manipulated from an app on the user’s smartphone. It will go on sale in the course of 2016.

Shoes of the future: The Digitsole brand made “Back to the Future” shoes a reality. The French firm presented tennis shoes connected via bluetooth to a mobile app that records the steps walked and the burning of calories, without the need to use a smart watch or similar. The resemblance to the film is that these sneakers can be automatically adjusted to the foot with the push of a button. For its operation, wireless charging is required with a duration of approximately one to three days.

The brand has more models of smart shoes such as heels that adjust the temperature and can count the steps and burn calories. These are priced at $ 350.

The director of the company, Karim Oumnia, said that the tennis shoes can be purchased at a price of $ 450.

4D at home: A device to be placed in any armchair promises to bring the experience of 4D cinema to the home. Immersit is a product consisting of four “legs” that are placed on the ones of one of your furniture and make it start to vibrate or move according to the sequence of a movie or game. This works through a central module that receives information from a computer with films that have already been preloaded to work with the motion sequence, although it also has the option of working based on the sound of a scene. The device is the brainchild of the French startup of the same name and goes on sale in August.

360 vision: Allie Cam is a small camera to extend the field of view, since it allows you to record in 360 degrees. It has a viewfinder of up to 182 degrees to both sides, which allows you to have a circular shot. The gadget comes in two models, one static and one mobile, mounted on a helmet, to record extreme tours. The price of the desktop version is $ 599 and the mobile version is $ 699; both will be available in 2016.

Nausea-free pregnancies: Relief band was one of the gadgets introduced to improve health. This wearable is placed on the wrist and, through pulsations, stimulates the nervous system to relieve nausea. The device uses well-known acupuncture points, is aimed at pregnant women and travelers. It is already on sale on the reliefband.com site and on Amazon United States.

The wearables market continues to grow. In the United States, it increased by 22% over the past year, which generated profits of 3.7 billion dollars in sales of smart watches and 1.3 billion in sales of physical activity meters, according to information provided by the CTA.

Goodbye acne and baldness: If you already notice sparse hair or a lot of blemishes on your skin, this pair of gadgets can help. Using light reflections technology, iGrow reactivates the growth of hair follicles, while iDerma rejuvenates the cells of the face to help eliminate wrinkles, acne and other blemishes. The first is already on the market and is priced at $ 695 while the acne product will go on sale during the second quarter of 2016 at a price of $ 350.

Super safe gold cell: The Gatca-Elite cell phone promises to be one of the safest cell phones on the market. It has a data encryption system for all the applications and information that is shared from the device, as well as facial biometric recognition and a system of its own development that makes the user the only one who can unlock it. It works on a modified Android system.

Although its purpose is to be a safe gadget on the inside, its exterior is luxurious, as it is finished in 18 karat gold. It does not yet have an outlet price but will arrive in select stores in September 2016.

The portable Tower of Babel: Problems communicating with people who don’t speak your language? The ili company promises to make your life simpler thanks to a portable translator. The gadget, in the form of usb, which has a device through which you can speak, allows the user in a first version to translate phrases from English to Japanese or Chinese and vice versa. In a second version, the device will incorporate the French, Thai and Korean languages; in a third, phrases in Spanish, Italian and Arabic can be translated.

The portable translator does not require the internet; contains a library of travel lexicon, so it promises to outperform all forms of translators available on the market. The ili Business Network company is looking for a network of partners to sell its gadget, either through travel agencies, hotels, local governments or department stores.

The ‘safe’ suitcase: When traveling by air or by land, one of the concerns of travelers is to ensure that their belongings arrive safely at the destination. And what safer way than luggage that requires your fingerprint to open. That’s what Digipas USA’s eGeeTouch Smart NFC-Fingerprint Luggage Lock does, which introduced a line of luggage and suitcase locks that promise to give travelers greater security.

This device replaces the traditional padlock methods for your bags (either key or combination) with a simple touch of your index finger fingerprint. If you prefer, the fingerprint system can be replaced by a combination that you can activate through an application on your smartphone.

The luggage security system will warn you of the movement of your luggage at all times, so you can know if your belongings are being transferred to a place that you do not want or know. The fingerprint lock will begin shipping in April of this year, with an estimated cost of $ 79.

The rejuvenating steam closet: The fountain of eternal youth for suits, shirts and dress pants is what the second generation LG Styler offers. This is a steam closet that resembles a refrigerator, in which you can put your clothes (up to four items at the same time) to ‘sterilize’ them and remove wrinkles. The minimum time to put the clothes on is 20 minutes and the maximum 59 minutes.

The LG Styler does not use detergent and can alert you when it requires maintenance and repair. It contains an internal heating system that according to LG, prevents your clothes from shrinking after being washed. It will be on sale at an initial stage in the United States in March of this year, although there are already plans to take it to other parts of the American continent. LG estimates it will sell for about $ 250.