The new life of Pau Gasol

Pau Gasol definitively closed his stage as a professional player last week in an emotional act at the Liceu, and he is already beginning to focus on his future with new challenges and objectives. And also improve in another sport such as golf, his new hobby And that is leading him to improve by leaps and bounds with the help of Moià’s professional, Adri Arnaus.

The runner-up of the Spanish Open played this Wednesday the Pro-Am tournament of the Estrella Damm Andalucía Masters together with Pau Gasol and another former professional, in this case, ex of Madrid and Barça, the Portuguese Luis Figo.

Pau is improving his game at a forced marches also with some with the help of Arnaus and the technical details of the Moià coach, Nacho Garrido, who was giving him directions around the field on how to lower the stick to make a good impact. 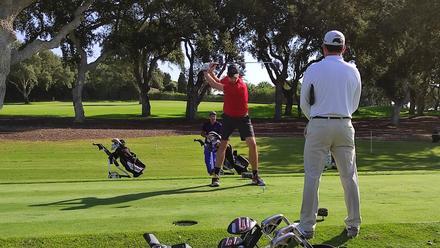 “For the moment I’m staying in Barcelona & rdquor ;, the former NBA star and former Barça player told SPORT. “I have many issues ahead of me and for now, we are here waiting for my daughter to start school & rdquor ;, explained Pau.

And the thing is that ahead he has several issues that he wants to develop such as working with a couple of brands that he did not want to reveal, as well as your homework as rrepresentative of the Olympic athletes and, of course, his Foundation to which you will continue to pay close attention.

“Now I try to enjoy more things that I couldn’t before, and among them, learn more about this sport & rdquor ;, commented the one from Sant Boi, that is already handled with enough ease with the clubs in hand and great coordination for that 2.15 that shines through the Valderrama field.

He does not rule out returning to the Palau one day to see his former teammates, with whom he shared the last months of his professional career. “Maybe if I go, but I have nothing planned,” he says.

His wife fond of him

“In fact, the one who introduced me to this sport was my wife, so now we can practice it together although I have to get down to their level & rdquor ;, said Pau.

It has been a quick getaway to Cádiz because this Thursday he already plans to return to Barcelona to continue working on his future that will allow him to enjoy life a little more after that long and successful professional career that barely gave him time for anything.

After playing with Adri Arnaus, Pau’s goal is to one day share a game with the world’s number one, Jon Rahm, with whom he crossed paths on the field during the day prior to the European Tour tournament. We bet we will see them together very soon.

The barcelonian Victor Garcia Broto arrive at Costa Brava Challenge with the victory in the final of the Alps Tour...

Brivio could close his F1 adventure and return to MotoGP