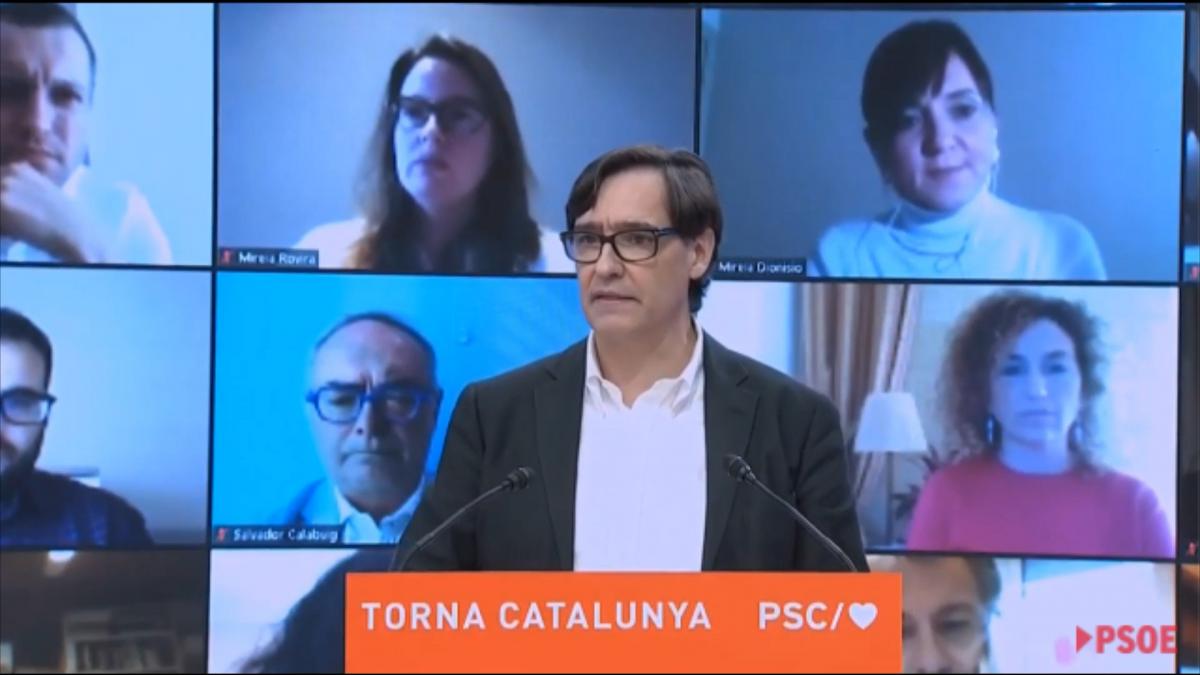 The political future of Salvador Illa it is decided in Catalonia. Not in the elections to the Generalitat, in which the Catalans will decide whether or not they make him president or where the PSC is. Before that, next week the Parlmanent will have the last word on his near future. On January 15, the Catalan parties will decide there if the elections convened for February 14 they are postponed againr, in this case due to the pandemic, it is the signal that Moncloa is waiting to know that its ‘star’ minister will not remain in limbo, “off the hook”, if you leave Health and the elections disappear from the horizon again.

Illa repeats over and over again that he will not cease to be a minister until the electoral campaign in Catalonia begins. Despite criticism from the other parties for combining his position as minister and his condition as candidate for the Generalitat, Illa thus protects himself from the possibility that on February 14 elections will not be held in Catalonia either, as happened last fall .

With his eyes fixed on that electoral call that in the end did not take place, for the month of June the President of the Government, Pedro Sánchez, I already planned to exchange the leader of the PSC, Miquel Iceta, by Illa, something that was not necessary to do after the summer because the expresident, Quim Torra, finally did not call the elections.

Sánchez’s plan was moved at the beginning of the year and Moncloa announced at the height of Christmas that Illa would be the candidate for 14-F. Criticism and reproaches rained -which still last- from the opposition for the refusal of Sánchez and Illa to take over in Health and the Parliament will begin to give free rein on Friday that comes closer and closer to the departure of Illa del Ministerio, where everything points to He will be replaced by the Minister of Territorial Policy, Carolina Darias.

On January 15, the Party Table that was established in the Parliament before the elections will meet to study whether they can be held on February 14. To do this, they will study a report on the situation of the coronavirus in Catalonia that will be prepared by the Ministry of Health of the Generalitat, which will also recommend “possible scenarios” on how to proceed.

Health experts considered that a month before the 14F a forecast of how the situation would evolve could already be made, although for now, no clear tilt between matches neither to keep the date of the elections nor to postpone it.

Slight improvement and other people’s wars

If the decision is to go ahead with the February 14 elections, the campaign will begin at the end of January and it will be when Illa will leave Health to “return” to Catalonia, as the PSC campaign says. Then, it will be shown if the slight improvement than probes managed by the director of Sánchez’s cabinet, Ivan Redondo, they predict for the PSC when exchanging Iceta for Illa become reality, also as a consequence of a unusual situation of isolation, between the crossed ‘wars’ that the rest of the parties wage between them.

As seen from the central government, the appointment of Illa as a candidate has not been harmful, although it is not expected to catapult him to the Generalitat. Actually, the objectives in Moncloa are more modest and the 17 deputies that the PSC has in the Parliament today have to increase by 4 or 5 seats.

With the current political fragmentation in Catalonia, which will expand with the PDeCAT candidacies spun off from JxCAT and the new Nationalist Party of Catalonia of Marta Pascal, the difference can lead to the PSC being third force and, if ERC ends up dissociating from JxCAT, it can mean a joint government, that it is not ruled out that it is again a tripartite, with the Commons, or a quadripartite, if the PDeCAT gets seats.

For this reason, from Madrid the key is that Common do not suffer a blow such as Podemos in Galicia and the Basque Country last year and that the heirs of Convergence enter the Parliament.

Until then, and if the elections are finally in February, Illa will land in Catalonia in a panorama that in the Executive it is observed not conducive to getting melee against the minister. According to this point of view, ERC is more busy unseating JxCAT than charging Illa and the PSC, in the same way that Ciudadanos is more concerned about not getting cornered. In part because of the PP who, in turn, tries to avoid Vox’s surprise.