The tenth girl in the Mansion of Nuestra Belleza Latina?

Sunday’s gala at Nuestra Belleza Latina was to rent a balcony, as the names of the contestants chosen by the jury to enter the Mansion of the contest with their own key were announced.

And although at the end of the evening, which left many viewers dissatisfied to see that their favorites could not advance in the competition, and happy to the followers of Lupita Valero, Raishmar Carrillo, Yelus Ballestas, Génesis Suero, Mía Dio, Jaky Magaña, Melsissa Alemán, Clauvid Dály and Sirey Moran, who are already inside the Mansion, two more girls and their fans are biting their fingernails.

The jury revealed only the names of 9 of the 10 finalists who will compete for the crown of Nuestra Belleza Latina, and left the Cuban Fabién Laurencio de la Concepción and the Venezuelan Dhanna Barnique facing each other so that the public can decide who by vote. one of them must enter the Mansion and who must say “goodbye” to their dream.

With two very different styles and loyal fans supporting them, the Cuban and the Venezuelan have generated all kinds of reactions on social networks about who will be the lucky one to obtain the key to the Mansion. Both contestants are trying to mobilize their followers to call as many times as necessary or to manifest through the official reality show page as soon as possible, since votes will only be received until almost midnight this Monday, when it expires. the 24-hour deadline given by the program to collect the votes.

“Unfortunately we did not get a direct pass to the Mansion, but it is up to you to vote in the next 24 hours so that Venezuela can enter … I want to go very far and it is up to you,” was the clamor that Dhanna Barnique made, to through a video posted on the NBL account on Instagram.

His contestant, Fabién Laurencio de la Concepción, did the same, and in a message a little more measured than the Venezuelan, he asked for the support of the public.

“We spent one more step in the competition, unfortunately we have to go to the voting … I count on your vote,” said the beautiful Cuban in her video.

Both Fabién and Dhanna supporters have expressed all kinds of messages in which they not only cry out to the public to vote for their favorite, but where they have launched typical criticisms of this type of competition, showing their annoyance at having left in that situation two strong contestants, both worthy of entering the Mansion.

“I will no longer see this program, they have left better people and all their audience knows it”, “The pim pum pam stays. 😎 I vote for the Cuban ”,“ Of course we can🙌 Vamosss VENEZUELAAAA 🇻🇪🇻🇪🇻🇪🇻🇪🇻🇪🇻🇪👑👑👑 ”,“ We ​​Dominicans do not support you for saying that you want Genesis out of the competition, that ironic that she got the direct pass and today you are begging for votes😉 “, were some of the comments from the fans of the show. “Sorry, I was going to vote for her (Dhanna) but for saying she wants the pim pum pam out I changed my mind. Next ”. 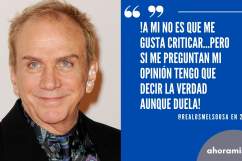