The top scorer Adolfo is also key for Velasco

The Barça of Jesús Velasco continues to work like clockwork and on Wednesday he linked his tenth consecutive victory in all competitions (seven in the League and three in the ‘plenum’ in the Main Round of the Champions League). With a much more possession game than in previous seasons, the Barça team is proving intractable and a good part of the blame is on Adolfo.

Accustomed to the role of ‘second on board’ since he became the best possible squire for Dani Salgado at Industrias Santa Coloma, the Catalan is shining in all facets with a job that is also captivating the new Barça boss. In fact, In the 2014-15 season, the Barcelona player already scored 24 goals with 22 years just turned… but the now councilor went to 48.

The reality is that Adolfo is much more than the best inferiority defense specialist on the planet. With an overflow capacity that has only been glimpsed on occasions to date, the colomense lives a marriage with the goal that he has sacrificed in part since his arrival at Barça to be key in other aspects as well. 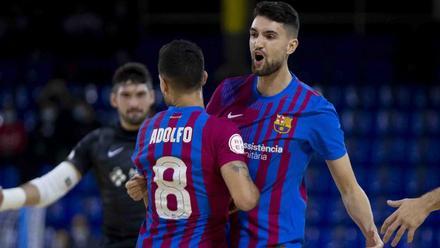 Now the numbers speak for themselves. With the ‘double’ he signed in Wednesday’s victory in Zaragoza (3-5), the right wing He has already been eight and is the third highest league scorer only behind his teammate Ferrao (11) and Slovak Tomas Drahovsky (12), who remains in front thanks to his spectacular sextet against Fútbol Emotion Zaragoza with Industrias Santa Coloma.

Adolfo was also important in the Barcelona’s triumphant walk through the Main Round of the Champions League, with individual ‘targets’ against Viten Orsha (5-1) and Levante (2-9) in the first two games in which the pass to the Elite Round was already sealed.

The excellent moment that the blaugrana is going through was also seen two weeks ago in the two friendlies of the Spanish team against Ukraine, which ended with 3-0 victories. The colomense scored a goal in the first game with an important role in addition to being the defensive spearhead every time the ex-Soviets resorted to the attack with a goalkeeper-player. 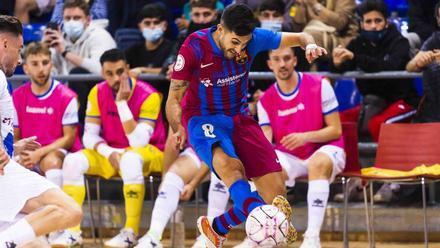 Adolfo is a benchmark for Barça de Velasco

In his full maturity as a player at 28 years old, Adolfo is answering with capital letters to the confidence that Jesús Velasco has shown him from day one and wants to continue being a key player at this Barça.

Without rest after last night’s victory in Zaragoza, Barça returns to training this Thursday with an afternoon session to prepare for the difficult visit of Jaén Paraíso Interior to the Palau tomorrow at 12.30 pm in a duel between the top two in the league.

The Catalans lead the table with 21 points after linking seven victories in a row and they have played one more game than the Jaén, second with 18 with the legendary ex-Azulgrana Aicardo in their ranks.

It will be the last litmus test for the Elite Round of next week’s Champions League in which the team led by Jesús Velasco will try to seal the ticket for the Final a Cuatro.

It seems unlikely, but it is not impossible. The Juventus reaches the last day of the group stage with options...

That the defeat before a favorite does not make you not notice the things that you have done wrong. In...

Drugs, alcohol and the downfall of a Ryder Cup champion

Related news "He grabbed my hand and kissed it. He didn't let go. He stroked the back of my neck....