37KM | A certain nervousness begins in the peloton. The second port of the day arrives with the Vilviestre Hill and teams are already fighting for positions when the road narrows slightly. No one wants to get hooked on any possible every. 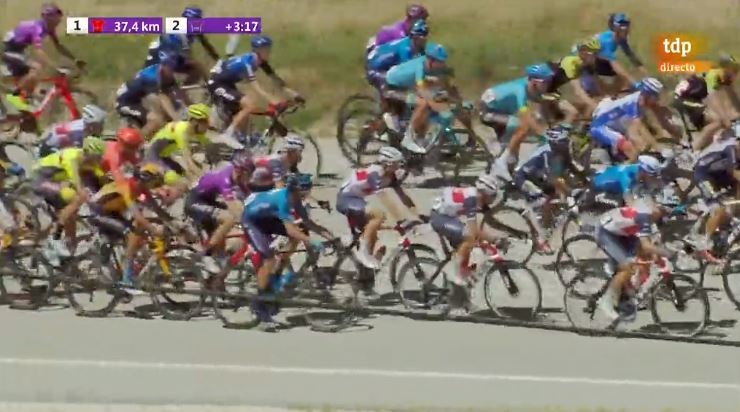 48KM | The peloton is already rolling fast and reduces the advantage to four minutes. Deceuninck-Quick Step he doesn’t want surprises and he constantly pulls the big group.

80 KM | No news in the race, where the escape maintains the six minutes. There are only 20 kilometers left for the road to begin to chop upwards in this Vuelta a Burgos. The first port of the day is Alto del Cerro, 5.4 kilometers at 2%. The hardest comes at the end with a last half kilometer at 6.6%. Will a squad favorite move in search of madness?

85 KM | Bad news for the Burgos round because Juan Jos Lobato and Mikel Aristy (Euskaltel) and Biniam Girmay (Nippo) they also get off the bike. 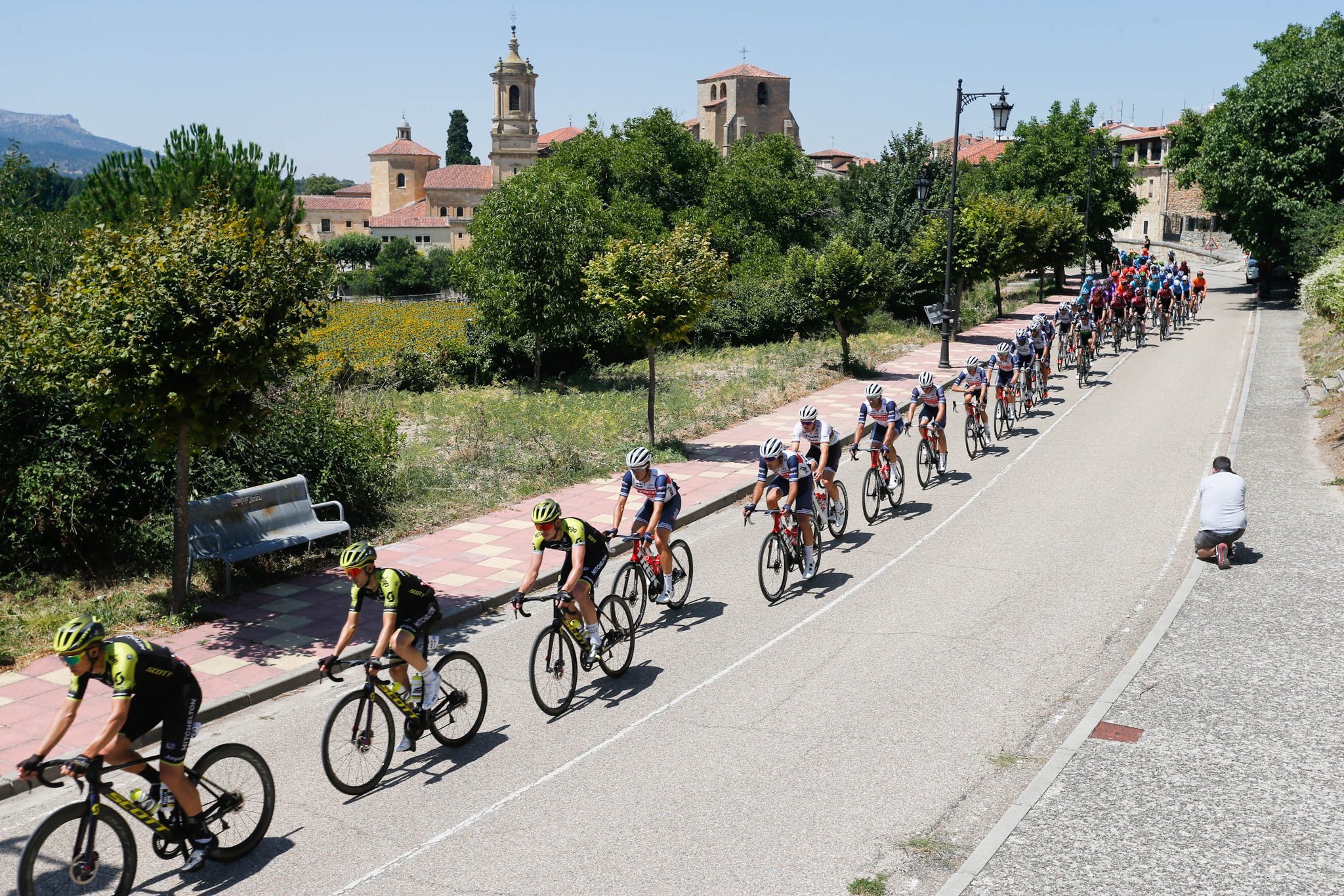 105 KM | When passing through Santo Domingo de Silos, the advantage remains at 6’15 “. The town of 279 inhabitants sees how the peloton maintains its relaxation while the fugue is well organized. Gotzon martn It is the maximum interested to be able to take the points of the classification of the mountain, which one leads.

#VueltaBurgos: the peloton rolls quietly at kilometer 50 of the race.
Without representation of the runners in the flight of the day.
@ EnriqueSanz89 leaves the race with his mind set on @CircuitoGetxo that takes place tomorrow. pic.twitter.com/wi8YWXKqcC

100 KM |Alejandro Ropero (Kometa) he considers it impossible to contact the front group, which was separated by one minute, and he drops to the peloton. The cyclist from Granada has not been able to keep up with the leading race, which is already more than six minutes ahead.

110KM | The escape of the day is consolidated, which already has a little more than five minutes of advantage. We remember that the brave of the day are Dani Navarro (Israel), ngel Madrazo (Burgos BH), Arjen Livyns (Bingoal), Delio Fernndez (Nippo), Gotzon Martn (Euskaltel) and Joel Nicolau (Caja Rural) 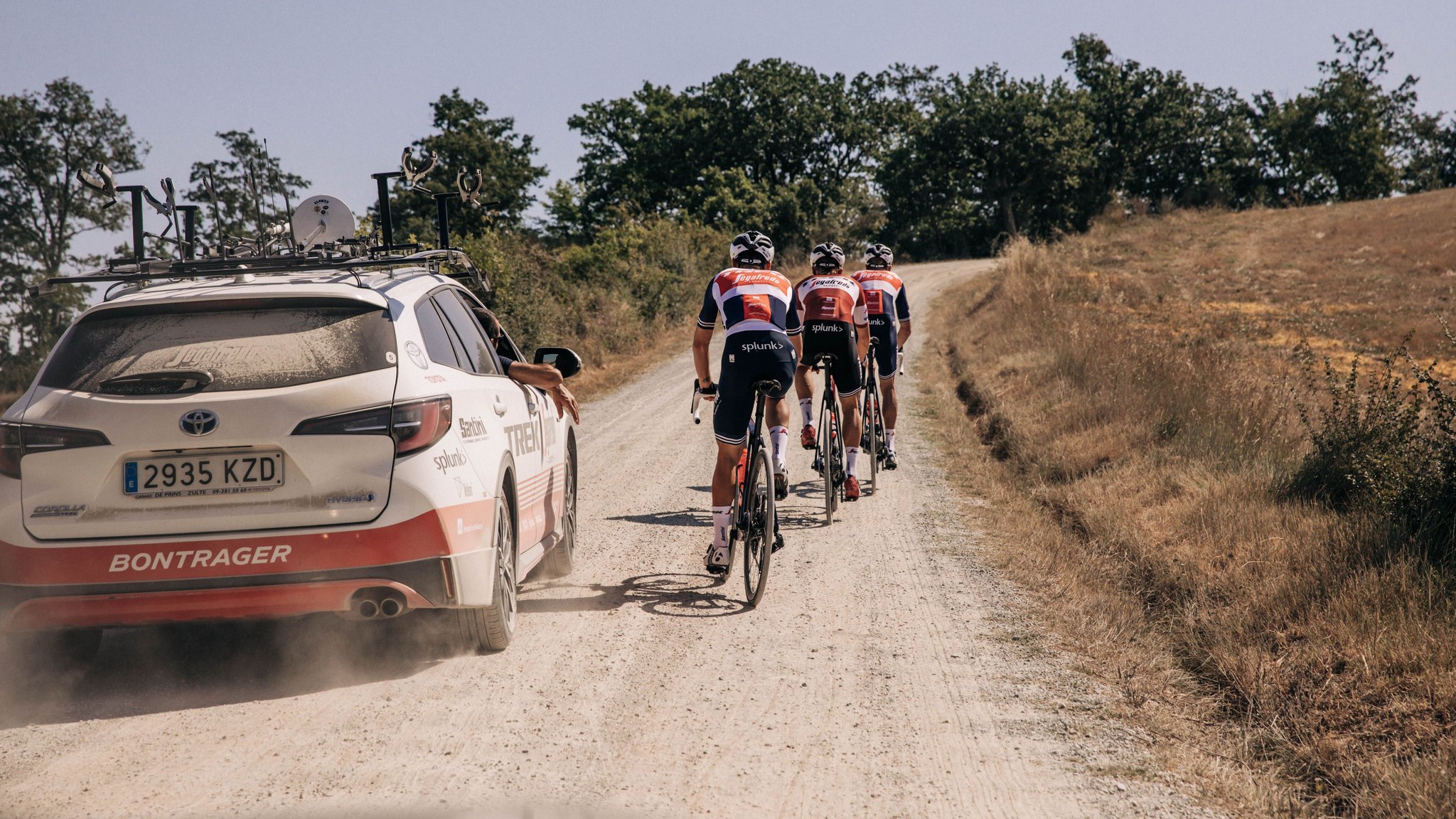 LAST MINUTE: SIX BICYCLES STOLEN FROM THE TREK SEGAFREDO CUTTING THE ROOF OF THE ROAD AT THE STRADE BIANCHE

According to reports La Gazzeta and the team itself has confirmed, the thieves have entered the path of the American team and have taken the material of the women’s team for the Italian race.

Bad start to the day for the team in Italy. Six Trek monda of the women team were stolen in the night. The thieves broke through the roof of the truck and took the bikes. The riders will still start the @StradeBianche on spare bikes.

123 KM | After many attempts, it seems that the escape of the day is settling. Dani Navarro (Israel), ngel Madrazo (Burgos BH), Arjen Livyns (Bingoal), Delio Fernndez (Nippo), Gotzon Martn (Euskaltel) and Joel Nicolau (Caja Rural) they are the protagonists. This group now has a lead of around four minutes with the peloton.

Martin, leader of the mountain will try to get as many points as possible in third category ports (Alto del Cerro (5.4 km at 2%), Collado de Vilviestre (3km at 1%) and Alto del Collado, with 4 kilometers at 4.5%), although he knows that it will be difficult to keep the red jersey against Remco Evenepoel on Neila’s arrival.

Just 20 minutes from the start of the Strade BiancheIt is a good time to remember the 184 kilometer journey that stars like Peter Sagan, Jakob Fuglsang, Van Avermaet, Julian Alaphilippe, Philippe Gilbert and the beginner Mathieu Van der Poel:

The men will soon be underway in Siena, here’s a look at the 184km course that awaits them … pic.twitter.com/zZxCFRIPUE

George Bennett He has also had time to stop with the organization of this Tour of Burgos to discuss this last stage in Neila. The Dutch rider is second in the overall classification and is trying to snatch the jersey from Evenepoel:

@georgenbennett of @JumboVismaRoad is second overall 18 seconds behind the leader

“If @EvenepoelRemco has the same legs as the other day, it will be difficult to win”

141 KM | First movement of the day with Ben O’Connor (NTT), Simone Velasco (Gazprom), Lionel Timiniaux (Bingoal) and Alessandro Fancellu (Kometa). The escape has only lasted five kilometers and today the squad does not want to easily escape any leak.

13:04 | Mikel Landa He has had time to attend to the press before today’s big stage. For the Basque cyclist everything is possible in the great climb of Neila, and he is clear that he will have his opportunity to take the title from him. Remco Evenepoel: “The last four kilometers will be very long. It will be difficult with Evenepoel but everyone has weak points. We are going to try it for sure. I am enjoying it much after this time at home and it seems that everything is going well.”

Being difficult with Evenepoel but everyone has weak points. We will try” 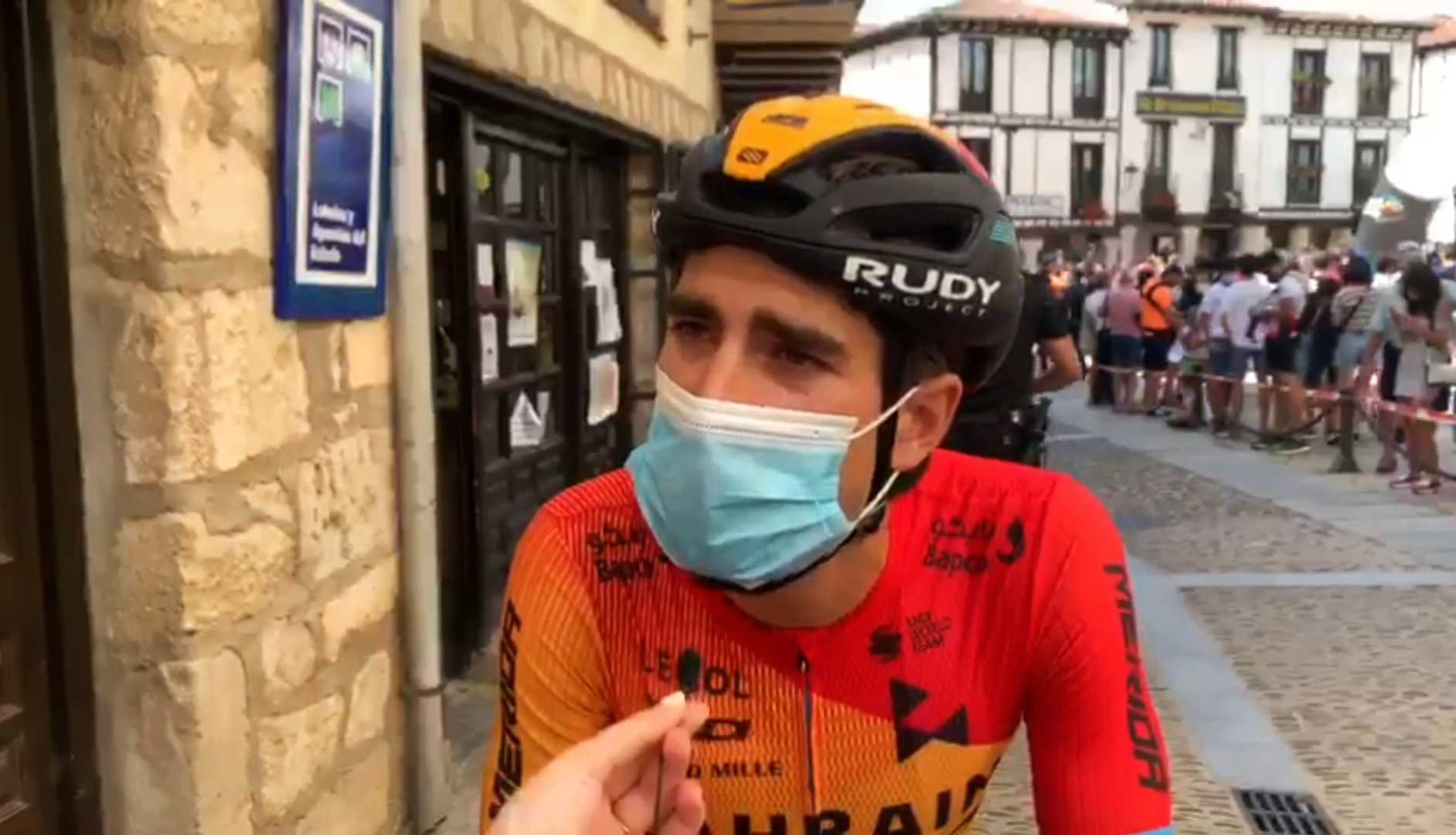 13:01 | This has been the departure from the municipality of Covarrubias, with only 550 inhabitants:

Discovering the Province of #Burgos

The platoon of @VueltaABurgos enjoying #Covarrubias

12:40 | The participation of Movistar in the Back to Burgos It has been really secondary. The Eusebio Unzu cyclists stayed behind halfway up the Picn Blanco, where there was only Alejandro Valverde as representative. Enric Mas He could not do anything either and reached more than eight minutes of Evenepoel at the Picn Blanco.

The Balearic cyclist can try to surprise today by having rested in yesterday’s transition stage. It seems that Mas did not have a good day in the mountainous stage and he let himself go waiting for his opportunity. He also had a conversation with our envoy Nacho Labarga, with whom you reviewed the current events and his expectations on his arrival at the Movistar Team. 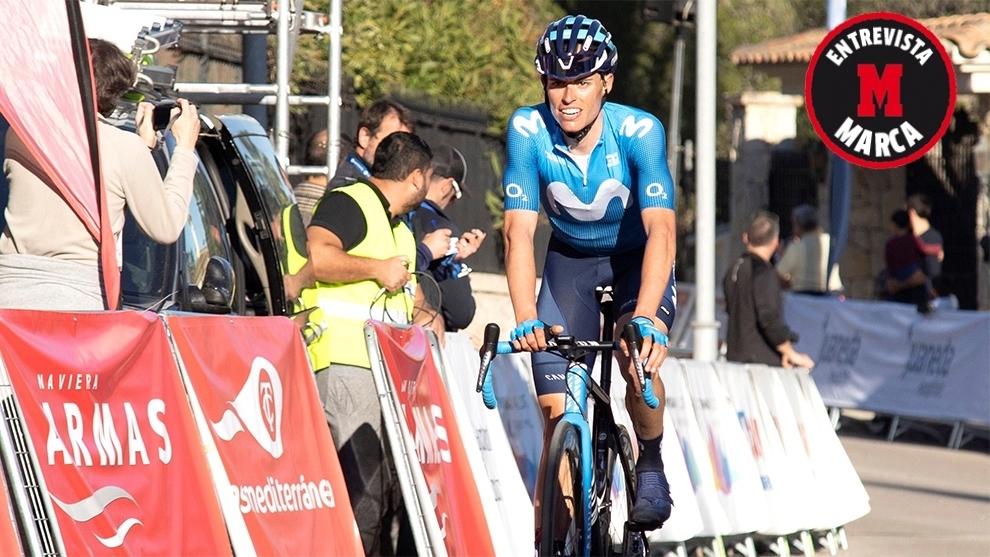 If you want to enjoy the exclusive interview, click here:

12: 34 | The Strade Bianche It has started in the female category. The cyclists cover 136 kilometers with eight sections of ‘sterrato’, sharing the spectacular arrival at the Il Campo square in Siena and the spectacular last ramp of Via Santa Caterina with a maximum difference of 16%.

12:24 | Back in Burgos, we get two bad news as the abandonment of the Spanish Lex Aramburu (Astan) and Julen Irizar (Euskaltel). And the Austrian’s Bora Hansgrohe Lukas Postlberger.

12:15 | In addition to this grand finale at Back to BurgosToday is a great day for cycling lovers. The Strade Bianche finally gives the starting gun for the classics in this new World Tour calendar. First class cyclists like Peter Sagan, Jakob Fuglsang, Van Avermaet, Julian Alaphilippe, Philippe Gilbert or Van der Poel They will fight to reach the Piazza di Siena first. 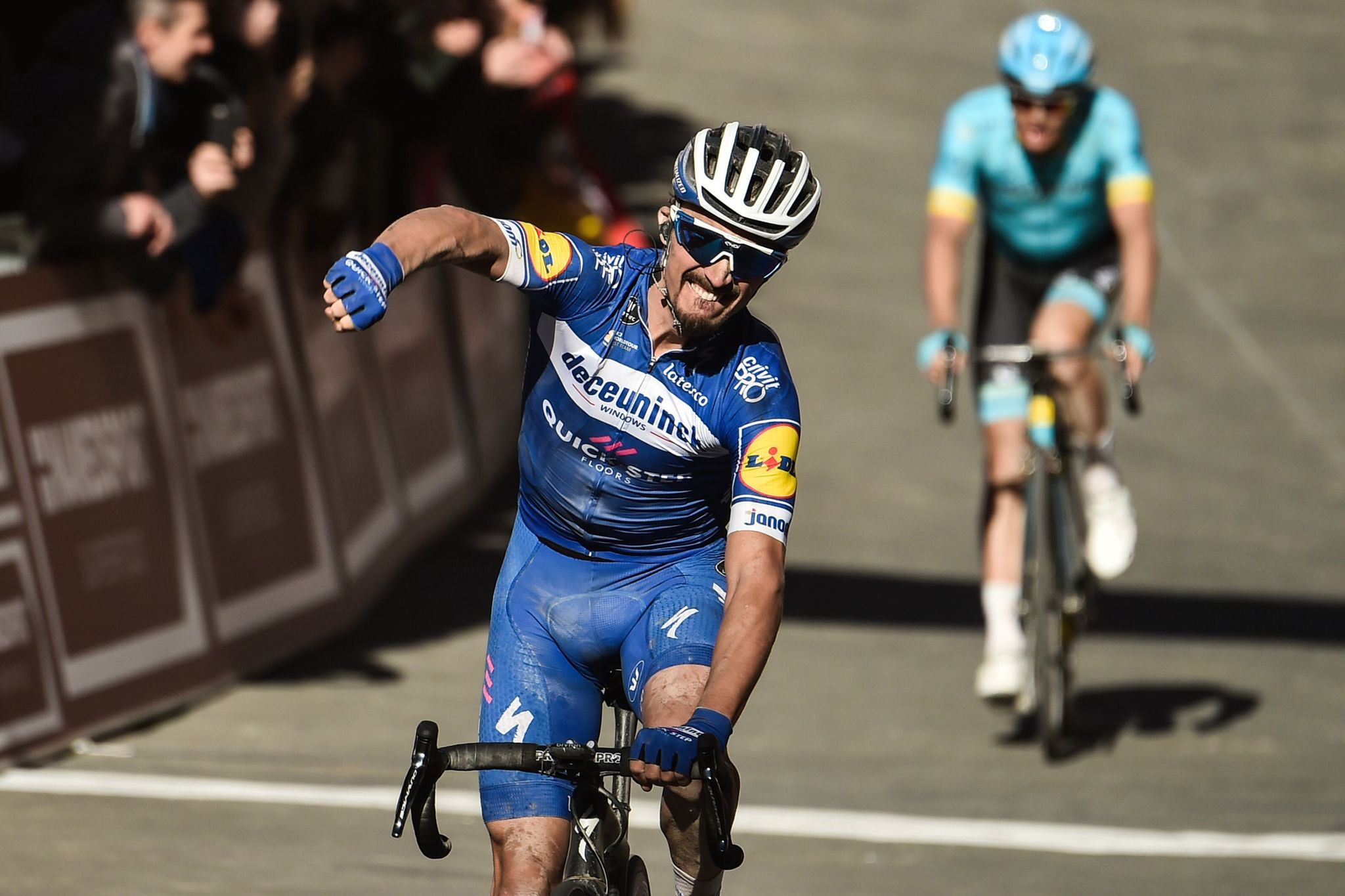 The French Alaphilippe starts as a favorite when defending the title, but Mathieu Van der Poel It is also postulated as a great contender and wants to continue the multidisciplinary reign it was achieving before the break. He is one of the best in mountain biking, he is the absolute dominator of world cyclocross and now he has thrown himself on the fine wheel. Undoubtedly this difficult Italian race fits him like a ring on his finger.

If you want to enjoy the preview, click here:

12:03 | As an aperitif for this great day, do not miss the special of our specialist Nacho Labarga, who reminds us of the first great victory of Mikel Landa precisely in Neila Lagoons all around 2011. The Basque runner attended MARCA to remember that great day. Today, nine years later, he starts as the favorite Spanish in the face of the final victory. For this, it will have to prevail over Remco Evenepoel and George Bennett. 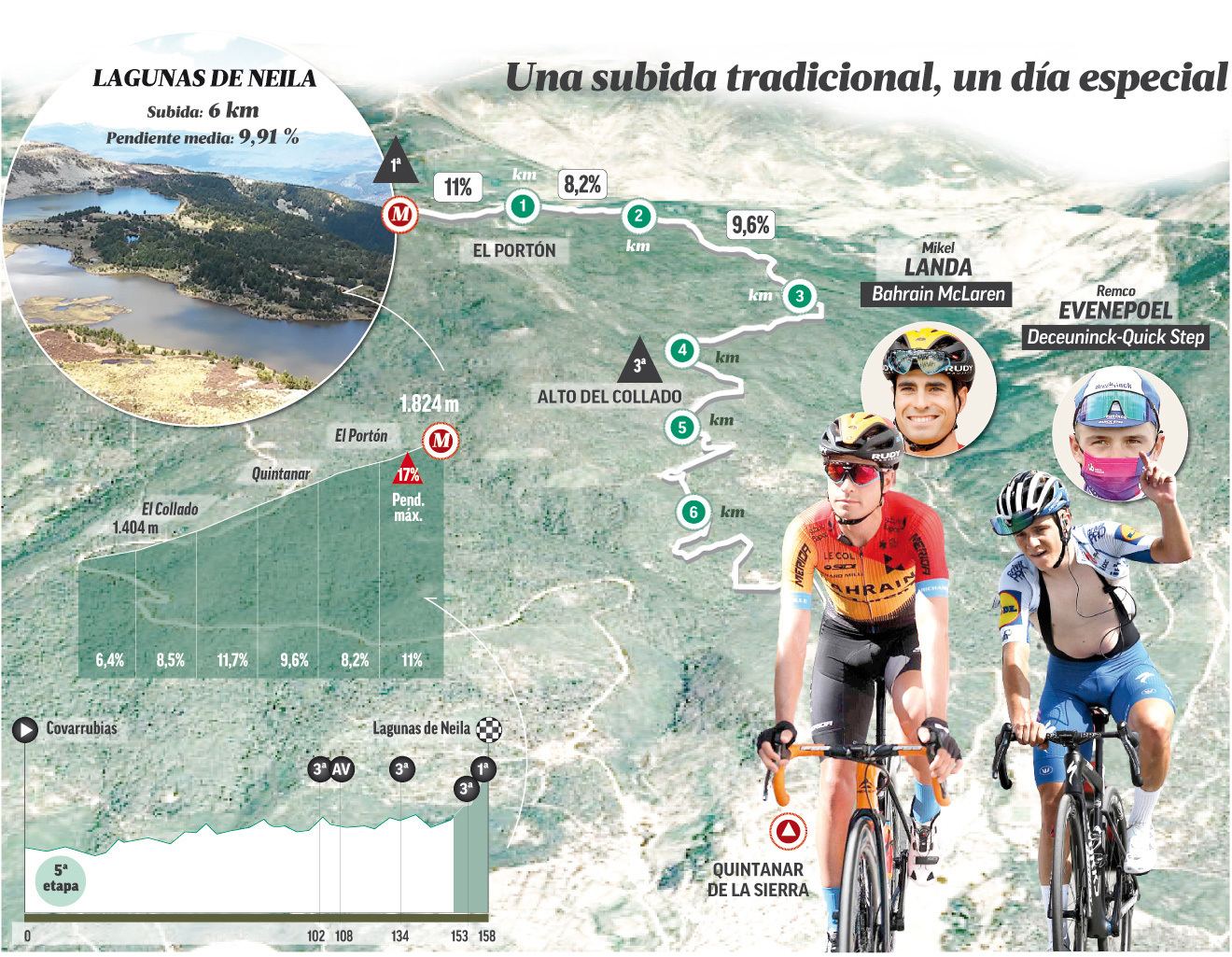 11:56 | As we have said, the queen stage of this Back to Burgos brings with it the most demanding climb of the round in Lagunas de Neila. The riders will have to face a day in which the road will always bite upwards along the 158 kilometers of route and in which the great high of Neila is marked in red, a short port of 4.8 kilometers but with a spectacular average drop of 10%. Before that, three appetizers are presented in which you could jump the surprise with some distant attack. Its about Alto del Cerro (5.4 km at 2%), Collado de Vilviestre (3km at 1%) and Alto del Collado, a third category port with 4 kilometers at 4.5%.

11:53 | With the arrival of this fifth stage, today this Burgos tour ends, the first great race after cycling activity resumed after the stop due to the coronavirus. They are Mikel Landa, George Bennett and the leader Remco Evenepoel those who leave with more possibilities to lift the final trophy in Neila.

11: 50 | GOOD MORNING TO ALL! We are here for a new exciting day of cycling in the Back to Burgos. Today is the queen stage and the last chance for the general favorites in the star climb of Lagunas de Neila.