Univision announced that the melodrama “Te acuerdas de me” is scheduled to premiere on Monday, February 8, 2021 at 9:00 PM Eastern Time. The television project stars the actors Gabriel Soto and Fátima Molina.

After the success of soap operas such as “La Usurpadora”, the producer Carmen Armendariz returns with this story of revenge and love that was recorded entirely in Mexico amidst the confinement experienced by the COVID-19 pandemic.

The story of ‘Te acuerdas de mí’ focuses on the life of ‘Pedro’ (Gabriel Soto), “a man married by commitment who knows true love in ‘Vera’ (Fátima Molina). However, they do not manage to establish their relationship and their paths separate ”.

The new Univision melodrama will have an unexpected outcome when the characters of Pedro and Vera meet again, so they will have to overcome various obstacles to be together sentimentally. 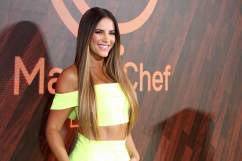 Carmen Armendariz’s production will replace the series “Imperio de Mentiras” that is in the last weeks of transmission through Univision screens.

What character does Gabriel Soto play in the new Univision melodrama?

In Univision’s new drama project, Gabriel Soto plays the character of Pedro, “a successful businessman and right-hand man and adopted son of ‘Olmo’. He gave up his dream of being an architect and married Mariana in gratitude to his father. “

“He is a very upright character, very polite. He always tries to do things so well that he puts aside what he really wants, “said Soto when talking about his character in an exclusive interview with Televisa.

The Mexican actor had been away from soap operas since his participation in “Soltero con hijas”, a dramatic comedy that was produced by Juan Osorio and broadcast on Televisa in Mexico in 2020.

Today, Gabriel Soto is considered one of the most important gallants in the Spanish-speaking acting industry. Among the most representative projects of the interpreter are: Sortilegio (2009), Amigas y rivales (2001), Vino el amor (2017) and Libre para amarte (2013).

What character does Fátima Molina play in the new Univision melodrama?

Fátima Molina makes her great debut on Univision screens with her leading role in “Te acuerdas de me”, the new dramatic bet of the important Spanish-language television network in the United States.

Molina gives life to the character of Vera, “a woman who has always felt a great emptiness due to the absence of her father. She is an enterprising woman who, together with her friend ‘Lola’, opens a furniture store ”.

The Mexican actress recently spoke about her character in an exclusive interview with Televisa: “It’s not perfect, but it’s real. It does not allow itself to fall before the adversities that are presented to it ”.