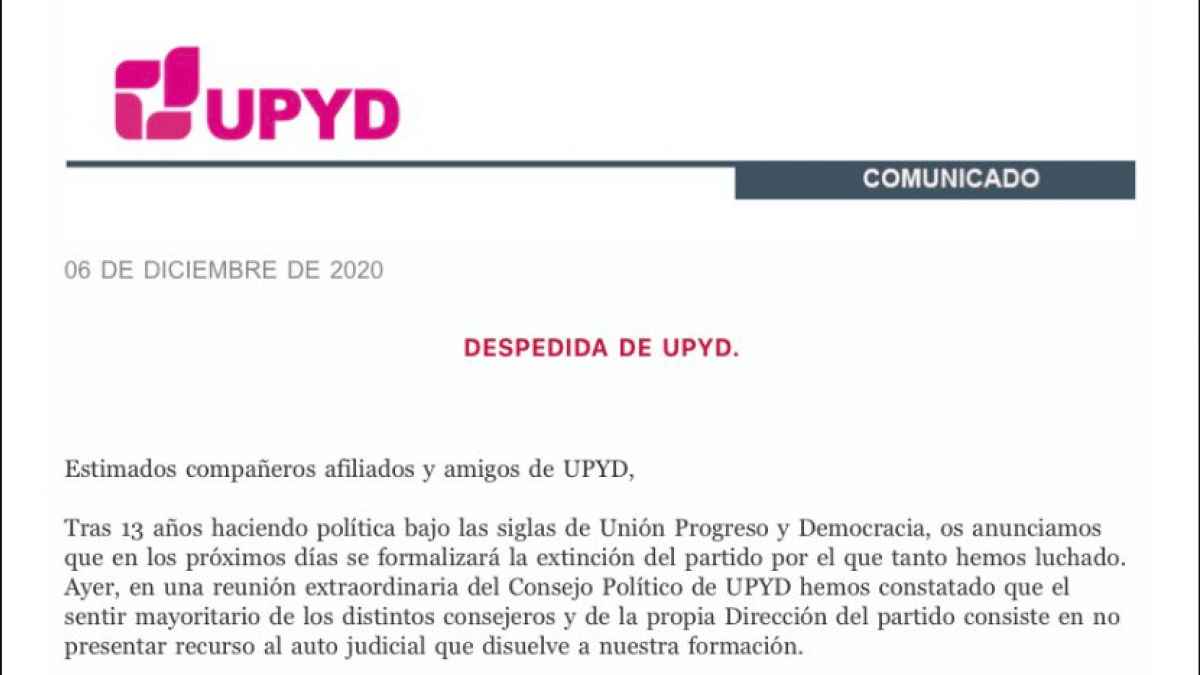 Union Progreso y Democracia (UPyD) has officially announced its dissolution thirteen years after its foundation. The formation decided this Saturday not to file an appeal against the resolution of the commercial court that decreed its liquidation, which de facto implies its dissolution.

A judge declared the extinction of the party as a legal entity due to its inability to deal with a debt that you have with an ex-worker of training, which was also an MEP in the European Parliament.

After not presenting an appeal, UPyD has said goodbye in a statement “recalling its role in the political transformation that Spain has undergone in recent years” and has highlighted “three important contributions that make up his political legacy, “such as” the breakdown of bipartisanship “or” the anticipation of the current political agenda by putting issues such as judicial independence or the defense of Castilian on the table, “among other issues.

In this sense, the party has recalled its “political and judicial fight against corruption, through its parliamentary action and the multiple complaints it led, highlighting the Bankia case “.

UPyD wanted this announcement to be made Constitution day “as a symbol of its reason for being in defense of democratic regeneration.”

“The Spanish political situation, increasingly polarized and strident, has made it difficult to consolidate a progressive, transversal and moderate center However, it does have its own political space among Spaniards “, has argued UPyD, which is committed to” seeking new formulas with which to once again be a useful tool for society. “

The training founded by Rosa Diez, among others, was currently led by Christian Brown, who was part of the Citizens’ electoral lists in the last generals of a year ago after an agreement between both parties. In fact, Brown would be the next candidate to occupy a seat in Congress if there were any losses among the representatives of Ciudadanos por Madrid.

In addition to some councilor in town halls, the maximum public exponent of UPyD is the MEP Maite Pagazaurtundua, who is also in the European Parliament thanks to a pact in the last European elections with the party now led by Inés Arrimadas.