A tenacious Valencia Basket defeated TD Systems Baskonia in a heads or tails final on Thursday and left them with no options to qualify for the ‘top 8’ of the Euroleague, but his pass to these quarterfinals and, with him, his participation in the next edition of the tournament, is pending that Zenit Saint Petersburg loses one of the two games they have pending .

Match corresponding to the 34th and last day of the regular phase of the men’s basketball Euroleague played behind closed doors at the Fuente de San Luis Pavilion (Valencia).

Two triples, one from Argentina’s Luca Vildoza and another from Tadas Sedekerkis, kicked off Baskonia against a local team that had a hard time starting. Seeing their problems in static attack, Valencia tightened the lines in defense with a Derrick Williams unexpectedly focused to turn the shock and the sensations around (21-14, m.8).

With the Basque team stuck, Dusko Ivanovic got hold of Pierria Henry that, without remembering the sprained ankle that was done on Sunday, adjusted the score with a couple of penetrations. But Valencia did not lose his cool. Perhaps already alerted that the victory of Real Madrid made their classification even more complicated, the locals were just released.

Seeing that the game could go away, Ivanovic opted for a team of five ‘little ones’ that, although it did not allow him to come back, it did cut the pace of Valencia. When he regained a normal structure, it was not difficult for him to turn the scoreboard with a 0-10 run that included a triple by Vildoza and another from Rokas Giedraitis but above all forcing losses to the locals (39-44, m.20).

The passage through the changing rooms calmed Valencia and paralyzed Baskonia but Ivanovic did not let his team fall and began a roulette of changes to punish mistakes that woke up his team, again with Henry as facilitator but also Giedraitis (45-53, m.25).

Valencia managed to stay afloat closing the rebound, with some luck in some actions and adding from the free throw line. Seeing himself alive gave him confidence and two triples in a row, one by Vanja Marinkovic and another by Klemen Prepelic, they put him ahead before the start of the last quarter (60-59, m.30). 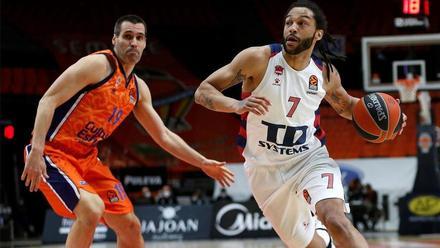 Ivanovic recovered his small structure with Polonara of ‘five’ and again stopped Valencia and the match was stuck. Henry returned to start the visitors with a brutal physical display but the locals found in Marinkovic and in Mike Tobey to two new references and they entered the final stretch ahead (76-72, m.34).

The clash was doomed to a heads or tails final after a triple by Sedekerkis but a ‘two plus one’ from Tobey started to unbalance the shock. A Polonara failure left the visitors with hardly any options but, oblivious to the discouragement, Baskonia held on to the crash until the end and squeezed a strange offensive foul from Kalinic to get within two with ten seconds to go.

The match was decided from the free throw line. Williams missed one of the two he had but Henry also missed his first which led him to throw the second to miss. He did not touch the ring, the ball went to Valencia and Although Williams missed both, the rebound of the second allowed him to close the crash.