“We are going to Tokyo to fight for the gold, I dream every day of an Olympic medal”

Came to Spain in 2004 after leaving Russia and go through Germany and France. Thanks to the invaluable work, and never fully recognized from the Red Cross, Gazi khalidov He arrived in Spain as a political refugee at the age of ten, in the company of his mother and brothers. They first resided in Saint Sebastian and then in Logroño, where they put down roots and where Gazi was trained as a person and a boxer, a sport he came to thanks to his brother. This summer, 16 years after his arrival in Spain, he is one of the members of the Spanish boxing team in Tokyo, next to Gabriel Escobar, José Quiles and Enmanuel Reyes Pla. Jalidov assures that, once the work is done, he can aspire to everything in the Olympic event. In this interview he shows himself as a close, reserved, modest young man with very clear ideas. He does not seek to stand out with bombastic phrases. He just wants his gloves to do the talking in the ring.

A lot of nerves with the approach of the Tokyo Olympics?

No, no, we already have them here, but we are calm. The work is done and we are going to fight for the medals. We go with everything.

In your case, with what ideas do you go to the Olympic event?

I go with the idea of ​​winning, that is clear. We are going for the gold and I am convinced that we can get it.

You arrive in good shape for the big date, right?

Yes, despite the injuries (the last one kept him in the dry dock for two months due to his injured shoulder) and everything we’ve been through, the truth is that we’ve had good fights, and we managed to qualify for the Tokyo Olympics , which was undoubtedly the most important thing.

Did you ever think that you would not qualify for Tokyo?

Well, at some point, because of the injury I had, but in the end with work we got it forward and we have achieved the objective.

Do youWhat does it mean to you to be at the Tokyo Olympics?

Many things, after so many years of work and sacrifice, being in the Games is a dream come true.

“Being at the Tokyo Games is a dream come true and we go with the idea of ​​winning. We can do it “

How is Gazi in the ring?

I am an intense boxer, who likes to do a little of everything. I don’t think I am characterized by anything in particular, but I would say that I am a fairly complete boxer.

Gazi (in blue), claims to be a quiet person in life, but when he steps into the ring he transforms

Who has always been your reference?

Muhammad Ali, for all that he has achieved in boxing and in life, for what he was as a symbol.

How do you get to Tokyo?

The preparation has been excellent, it could not have been better. We have always trained hard and are prepared for battle.

Do you believe in luck?

Everything influences, as in any environment and any sport, but if you are well prepared you do not have to go wrong at all, to win and go far you have to fight with everyone.

Do you have any nickname?

At the moment, no, but some call me ‘the magician’.

You live in La Rioja and I think you have a good relationship with former mountain bike rider Carlos Coloma, bronze in the Rio Games.

“I think I adapted quickly to life in Spain. I was learned the language and everything was quite fluid “

Have you sparred with Carlos?

We have ever measured ourselves in a ring. I remember once he hooked me and knocked me to the ground (laughs).

You came to Spain when you were ten years old, as a political refugee thanks to the Red Cross, what do you remember? How was the adaptation?

It was arriving in a new country (before arriving in Spain he passed first through Germany then through France, in the company of his mother and four brothers) and began to adapt to life here. I think I adapted pretty quickly and well. I was learning the language quickly and everything was quite fluid. 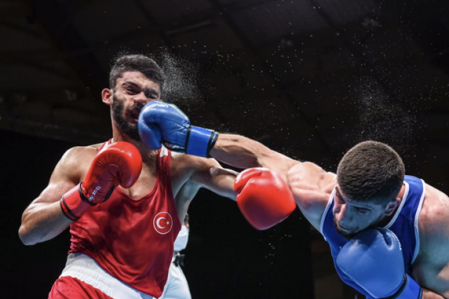 You started boxing thanks to your brother.

Yes, thanks to him, I was going to a gym. He told me to go with him. I signed up and so far.

Throughout a sporting career there are ups and downs, and you were no exception.

Well, I was injured for two years and that’s why I had to quit boxing, but I always stayed fit, active, and with the idea of ​​returning to the ring as soon as possible.

That is you hit too hard, hard.

… I try and hope it is seen in the Tokyo ring.

Can you make a living from boxing?

Now I only dedicate myself to boxing. It gives me to live and for now I’m going to continue doing this. I am young and I will continue doing what I like.

Are you thinking of taking the step to professionalism?

Later it may be, but to take this step depends on many things. I would like to take the step to professionalism, but it depends on how the race goes. Yes, there have been contacts with a promoter, but now I’m only focused on Tokyo and I don’t want to think about anything else. It will be seen later.

“Later I may become a professional. I would like to take the step. There have been contacts with a promoter “

You said that you arrive in good shape, but above the ring there are always more factors involved.

Everything influences: safety, a good physical condition and having good conditions in all aspects.

Have you studied your rivals?

You practically already know who my rivals are. We know them, but I don’t like to study them, see what they are like. I am not a boxer who dedicates a lot to studying my rivals. I am one of those who thinks that we are all the same, since we have two arms and two legs.

A good physical condition is key, but it is also important to work on the psychological one, do you work on it?

That depends on each person, on how each one is. Each one when entering the ring works differently. I am quite calm, both in life and in the ring. In the end it depends on each moment, on the rival.

It is clear that we all have two arms and two legs, but in the ring, do you like to take the initiative, go against it?

It depends on each rival. Above the ring what you have to be is quite complete and try to seek victory, knowing how to move laterally. The important thing is to win.

Do youYou dream of the Olympic medal, do you see yourself with it?

Sure yes, every day.

In the Tokyo suitcase, have you added any amulet, an object that gives you luck?

No, I just trust God 100%. In God and nothing else. I am quite a believer and being one helps me.

And, any music before going on stage?

No, I just try to focus on what I have to do and get my job done in the ring.

You have to go on a diet to be the most competitive on the ropes, but what food do you most miss?

The truth is that my mother’s food is missed, especially a fairly traditional dish from Kazakhstan, the jinkal (a dish of boiled bread, with meat, potatoes, sauce and garlic, bathed in the meat broth) .