Selena Quintanilla died on March 31, 1995. Yolanda Saldívar, a friend and president of her fan club, was found guilty of shooting Selena from behind and was sentenced to life in prison. Today she is alive and is still serving her life sentence, but can be paroled in 2025. Saldívar still claims that he accidentally shot the artist. Here’s what you need to know about where Saldívar is today and what he’s doing now. Selena will be the protagonist of a new Netflix series. 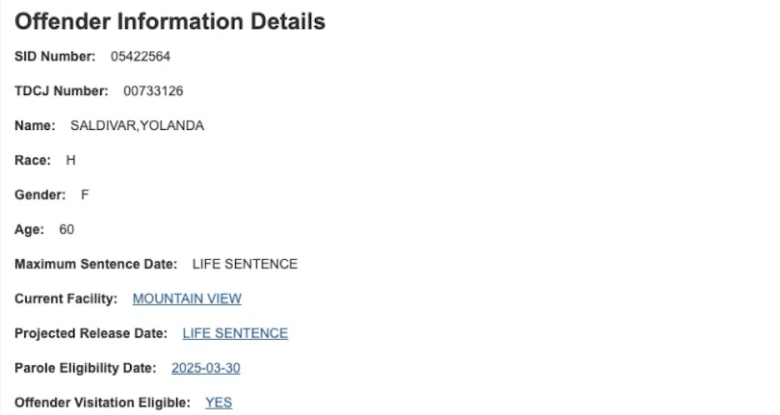 According to records from the Texas Department of Criminal Justice, which can be seen in the photo above, Yolanda Saldivar is currently 60 years old and serving a life sentence in Mountain View in Gatesville, Texas, a maximum security prison. However, he could be eligible for parole on March 30, 2025, just four more years in prison from now.

She was sentenced in Harris County on October 26, 1995, on charges related to murder with a deadly weapon. The shooting occurred on March 31, 1995, according to his court records.

Currently she can receive visits in prison.

In 2015, deceptive websites spread false information that Saldívar had died in prison, KSAT reported. The bogus website claimed that prison guards found her dead in her cell during a routine walk through the prison. Another hoax site claimed that Saldivar was going to be released in early 2015 due to health concerns. All those claims were wrong.

Saldivar tried to obtain a new trial in 2019

Yolanda Saldivar still claims the shooting was an accident, In Touch Weekly reported in 2018. Selena was 23 when she was killed.

In March 2019, Saldivar requested a new test, Radar Online reported. He stated that the prosecutor Carlos Valdez had favorable evidence in his favor, but did not reveal it to the jury or his lawyer. He said the evidence, which consisted of shoes Selena wore when she was killed, would have somehow helped prove that she accidentally shot Selena. However, his request for a new trial was denied, Radar Online reported.

Saldívar had been the president of Selena’s fan club and ran her clothing stores in Texas called Selena Etc., but was fired just weeks before the shooting, The New York Times reported at the time. Customers had been complaining that they were not receiving the items they bought from clothing stores, and employees believed that Saldivar was stealing money. She was fired after the money disappeared from the store.

Selena met Saldivar at the Days Inn motel in Corpus Christi near I-37. Selena had met Saldívar at the motel to see financial documents related to the boutique. Saldivar first told the singer that she had been raped and so Selena and Saldivar went to an emergency room in Aransas Pass, Texas. Carla Anthony, a registered nurse there, testified that she saw Saldívar and Selena that morning around 10:00 a.m. on March 24. Saldívar was depressed and said she had been raped in Mexico. Saldívar was told to speak to the police in San Antonio because the case was out of their jurisdiction.

Selena was shot in a room at the Days Inn shortly before noon. Yolanda Saldivar today continues to claim that she accidentally shot Selena. However, the prosecution said Saldívar did not call 911 or try to help Selena, despite being a trained nurse, CNN reported. She was found guilty of murder.

After Selena was shot, she ran into the motel lobby and collapsed. She was left as dead when she arrived at Memorial Medical Center in Corpus Christi, Texas.

Saldivar turned himself in to police after a more than nine-hour standoff in the motel’s parking lot, the Houston Chronicle reported. She was sitting in her truck with a gun pointed at her head, surrounded by police officers.

In October 2019, after Amber Guyger was convicted of murdering Botham Jean in her apartment, she was transferred to the Mountain View Unit, the Caller Times reported. The unit also houses women under sentence of death and is held on 97 acres of land.

The Associated Press reported in 2018 that Saldívar had become close friends with Diane Zamora in jail, a woman known as the “killer Texas cadet.” She was found guilty of the murder of Adrianne Jones in December 1995. Zamora said she and Saldívar were protecting each other in jail. Later, Zamora was transferred out of that prison.

This is the original version of Heavy.com