All over the world all Jewish citizens celebrate from the 25th day of the Hebrew month of Kislev, and for eight days the feast of ‘Hanukkah’, a celebration of lights or luminaries known as Hanukkah or Hanukkah which means ‘dedication’, and which For our calendar it has a different celebration date each year, this 2020 will be celebrated from December 10 to 18.

But what is the history of this holiday?

On this holiday the Jewish people remember the miracle that happened in the second temple of Jerusalem more than 2,200 years ago, in the 2nd century BC, when the Syrian-Greek regime of Antiochus wanted to distance the Jews from their religious beliefs of Judaism, with the so that they adopted those of Greek culture. This submission was not accepted by the Hebrew people, and under the leadership of Matityahu, and later by that of his son, Yehuda, the Maccabee, they rebelled against Greek rule, starting a great revolt that Antiochus wanted to disperse by sending troops to this place, but after three years of resistance and struggle, against all odds the Maccabees managed to win.

After the victory, the Jewish warriors expelled the Greeks from their lands, preparing to recover the Holy Temple of Jerusalem, finding it in ruins and desecrated with countless false idols, so they decided to re-inaugurate it through purification in a ceremonial act consisting of lighting the chandelier of Chanukia, finding that only a small pot of pure oil (holy oil), was in the entire temple, and perhaps it was not enough for the flame to burn for a single day; but it was here where the miracle happened, that small vessel allowed the flame to burn for eight days, the time necessary to be able to stock up on more supply of oil, enough to keep the flame of the light burning.

Since then, the Jews have celebrated these eight days and each of their nights, first lighting a candle called Shamash, with which they continue to set fire to each of the candles, night after night, and doing so in a left-to-left direction. right, until completing the eighth and last night, a ritual that is accompanied by songs like that of the hymn Hanerot Halalu, which among its lyrics says:

“We light these lights for miracles and wonders, for redemption and battles that you waged for our patriarchs, in those days at this time, through your kohanim (priests). During the eight days of Hanukkah these lights are sacred, and we are not allowed to use them except to look at them only to thank and praise your great name for your miracles and your wonders and your salvation ”.

Likewise, recitals and praises are made in gratitude to God, such as:

“Blessed are you Adonai, our God, King of the universe, who kept us alive, and sustained us, and brought us to this moment.”

Then when the families conclude with all the lighting of the menorah, it is that the liturgy of the miracle of light has been celebrated.

Who celebrates this date?

All Jewish families. This very important holiday for the Hebrew people is not equivalent to Christmas, but it is eight days when families and friends gather to light the Hanukkah and celebrate with joy; It is time to give gifts, and to taste traditional foods and dishes, enjoying sweets such as levivot or latkes and sufganiot, potato cakes and dumplings filled with jam, and other preparations fried in oil, this as a tribute to oil which led to the miracle of light.

In addition, the children are distributed chocolate coins, and they are given the typical toy of the holiday called a spinning top or sevivon (pirinola), a toy, which, given the prohibition of the Greeks to the Jews to study the Torah, under penalty of death, children and young people used it as a distractor, pretending to play, but the reality was that on the four faces of the toy, the initials of the words in Hebrew appeared: “A great miracle happened there.” 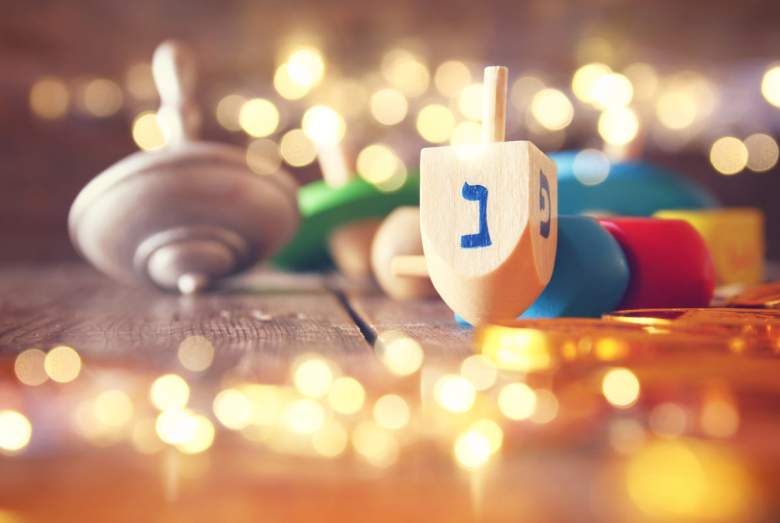