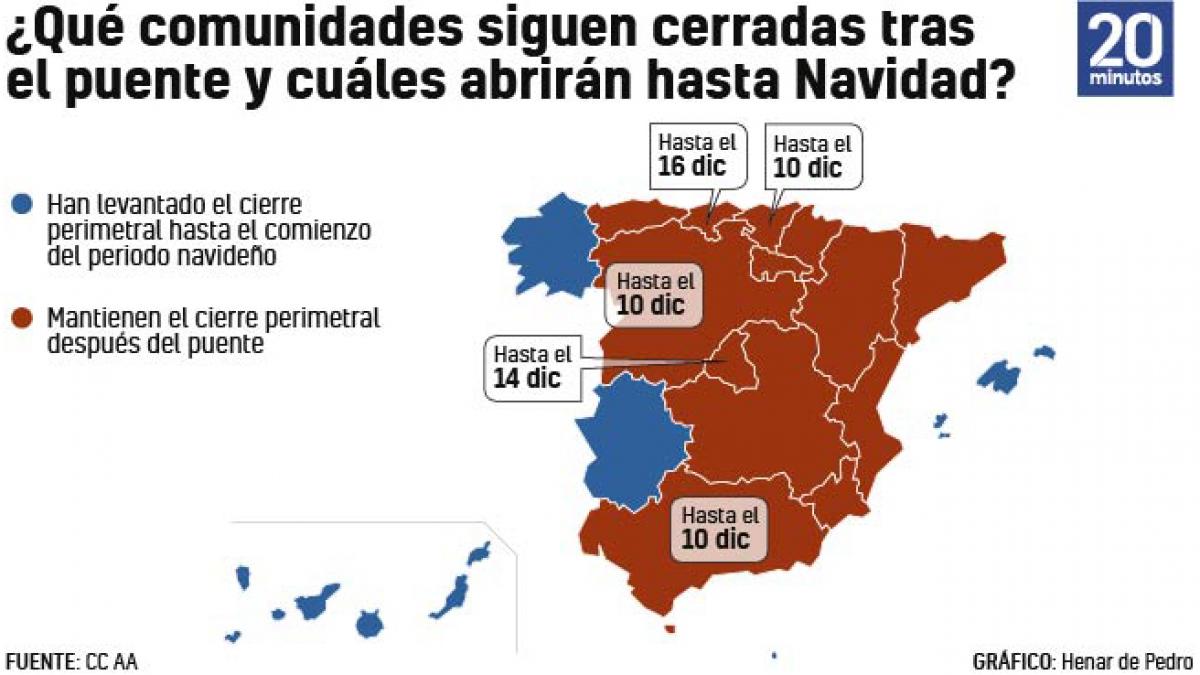 Once the bridge of the Constitution has been passed, the Government and Autonomies now set their sights on the Christmas, a festival in which traditionally many movements take place and that could reverse the downward trend of the accumulated incidence of Covid in Spain, which in recent weeks has been declining nationwide and currently stands at 215 cases per 100,000 inhabitants, still far from the 25 set as a target.

Therefore, there are many territories that maintain their perimeter closures and that, in addition, it has asked to tighten the minimum measures agreed in the Interterritorial Council of the National Health System and that they are adopting additional restrictions in order to contain the spread of the virus. We review the current mobility and activity limitations in each Autonomous Community.

The perimeter closure extends until this Thursday, December 10, when the Andalusian Government plans to publicize the measures against the pandemic that will be applied in the community in the face of the Christmas holidays. The term “relative” will be replaced (as it is considered ambiguous) by “family reunification”.

The hotel industry maintains the capacity limitation at 30% inside the premises and 75% on outdoor terraces. The curfewit is from 10 p.m. to 7 a.m..

The perimeter closure of the entire community is maintained until December 20, as well as the curfew, which is established between 11 p.m. and 6 a.m. According to the BOA of December 1, the provincial confinements until at least December 20, but the municipal confinements have already been lifted.

Currently, the Community is at an aggravated level 3 alert, which prohibits consumption inside the premises and forces the closure of non-essential activity at 8:00 p.m.. Regarding this Christmas, the Aragonese president has already advanced that mobility will only be allowed for family reunions on the most important days. “We are going to have to enjoy them (Christmas) in a different way”, has already warned the general director of Public Health, Francisco Javier Falo.

The Principality of Asturias does not have an end date for the current closing perimeter, but it has lifted the municipal confinement of Oviedo, Gijón and Avilés, as well as Laviana, San Martín del Rey Aurelio and Langreo.

The Government of Asturias, which extended the closure of the hotel business on December 3 for the next 15 days, assesses this Wednesday the possible gradual reopening of these establishments. Next week, measures related to culture and sport will also be reconsidered.

The Balearic Islands is, together with the Canary Islands and Extremadura, one of the only three autonomies in which perimeter closure is not applied. Mobility and nocturnal activity have been restricted on all its islands between 00:00 and 6:00.

Perimeter closure does not apply. It is the community with the lowest cumulative incidence (71 cases per 100,000 inhabitants) and the only current condition is a negative PCR for all travelers entering the islands.

The Official Gazette of the Canary Islands published last Friday the measures for Christmas, which limits meetings to 6 people until January 10, except on December 24, 25 and 31 and January 1 and 6, when it is extended to 10 people.

In Cantabria, the perimeter closure is extended until at least December 16 throughout the community. The curfew remains between 10 p.m. and 6 a.m.

This territory plans to keep the perimeter closure throughout the month of December, except for the designated days (24, 25 and 31), in which relatives and friends will be allowed to enter. The curfew is maintained from 00:00 to 06:00.

🌲Measures that will be in effect during Christmas

❄️ Groups of up to 10 people
❄️ Perimeter closure but between 12/23 and 01/06 it will be possible to visit relatives / friends in other Autonomous Communities
❄️ On Christmas Eve and New Year’s Eve the curfew will begin at 01:30 a.m. pic.twitter.com/0oSCNRMFzq

The perimeter closure applies until this Thursday, December 10. In addition, the provinces of Ávila, Segovia, Salamanca and León are confined and entry and exit from them is not allowed.

In Catalonia, the perimeter closure will end on December 21, according to the de-escalation plan presented in November. The curfew is maintained between 10 p.m. and 6 a.m., at least until January. The meetings are limited to six people but as of December 21 it is expected to expand them to a maximum of ten from two groups of cohabitants.

The worsening of the epidemiological figures keeps Catalonia in phase 1 for another 15 days, which halted the advance to phase 2 last Monday, as foreseen in the plan outlined, and maintains the closure of shopping centers forced within this phase 1 .

The spokesman for the Government of Ceuta, Alberto Gaitán (PP), has advanced that the president of the Autonomous City, Juan Vivas, anticipates extend “until December 20” under “very similar” conditions, the mobility and social activity restrictions in force until the 10th, which include the prohibition to cross the Strait and a night ‘curfew’ from 10pm to 7am.

The maximum number of non-cohabitants that can meet in any public or private space is set at four and the capacity of religious temples, limited to 30% with a cap of up to 75 people.

The Valencian Government has extended the perimeter closure until January 15 and it will only allow the entry of relatives and friends on December 24, 25 and 31 and January 1. On those days, the curfew is extended to 1.30 a.m., but the rest of the dates remain between 0.00 and 6 a.m.

In addition, Ximo Puig has expressed his willingness to restrict family gatherings to six people, even on designated days.

Extremadura has not closed its autonomous borders. The curfew does apply between 00:00 and 6:00.

The perimeter closure of the entire Community has ended this midnight, but the Xunta maintains the municipal confinement in 56 localities. The curfew applies between 11:00 p.m. and 6:00 a.m. Facing Christmas, the Galician health authorities insist that people from more than two different cohabiting units not meet and warn that “the safest thing” is to celebrate only with people with whom you already share a roof.

The Community of Madrid will be closed until midnight on Monday December 14th. In addition, it applies restrictions on mobility and activity in four basic health areas in which the highest incidence is currently registered: La Moraleja, in Alcobendas, Guzmán el Bueno and La Elipa, in Madrid, and Barcelona in Móstoles.

The Curfew is maintained between 12 a.m. and 6 a.m. and meetings are limited to six people. Looking ahead to Christmas, the Executive of Isabel Díaz Ayuso has been in favor of relaxing the restrictions agreed in the Interterritorial Council, in which he voted against, but has announced that he will comply with the law.

The improvement in the epidemiological situation in Melilla has led the Autonomous City to publish a new order that reduces some of the restrictions, including the possibility of holding public and private events, the extension of business hours until 9:30 p.m., the reopening of cultural spaces and the expansion of capacity to 50% in certain spaces. This new order will come into effect at midnight on December 10 and will remain in effect until 11:59 p.m. January 10.

The Murcia Region passes this Wednesday to Phase 1 assistance, which implies the lifting of the perimeter closure of 43 municipalities, except Los Alcázares and Torre Pacheco, which remain at extreme risk. This will produce the opening of the terraces of hospitality establishments throughout the Region and the opening of interiors to a greater or lesser extent, depending on their epidemiological situation, except in the two municipalities that remain at extreme risk.

But the perimeter closure of the Region of Murcia, as well as the limitation of movements between 11:00 p.m. and 6:00 a.m. and a maximum of six people in meetings until January 6th.

Looking ahead to Christmas, the Covid Monitoring Committee plans to expand the maximum meeting capacity to 10 people on December 24, 25, 31 and January 1, as well as the review of the situation for Three Kings Day.

The perimeter closure in the Foral Community extends until Dec. 18 and the night curfew has been established between 11:00 pm and 6:00 am.

The perimeter closure is maintained until Decembre 19th and the night curfew remains in effect between 11 p.m. and 5 a.m.

The perimeter closure ends this Thursday December 10, but this Wednesday the Advisory Council of the LABI, the Basque Civil Protection Plan, meets, which must decide whether to lift the current restrictions and the measures to adopt in the face of Christmas. The curfew applies between 11:00 pm and 6:00 am and meetings are limited to six people.