Who are Osmel Sousa’s favorites on NBL?

. Osmel Sousa announced the names of his favorite queens in Nuestra Belleza Latina.

Osmel Sousa is one of the greatest queen trainers in the Spanish-speaking entertainment industry. The Cuban-born star was part of the Nuestra Belleza Latina judging panel throughout ten seasons of the hit Univision reality show.

Sousa ended her role as a judge of Nuestra Belleza Latina after crowning Clarissa Molina as the successor to her compatriot Francisca Lachapel, in the 2016 edition of the beauty pageant.

Despite his departure from Nuestra Belleza Latina, the outstanding artist keeps the most beautiful memories of his time on the Univision reality show; as he announced in an exclusive interview with Right Now.

Currently, Osmel Sousa is fully focused on “El Concurso by Osmel”, his own reality show in Venezuela that is currently in the initial phase of the second season.

Through “El Concurso by Osmel”, Sousa looks for young people who can become the representatives of Venezuela in international competitions such as the Reina Hispanoamericana and Miss Charm.

Nuestra Belleza Latina is one of the most watched television productions on Univision programming, surpassing companies like ABC in audience on Sunday programming.

The success of Nuestra Belleza Latina on television in the United States can be seen reflected in the artistic careers of each of the women who were crowned the undisputed winners of each of the seasons. Today, queens like Alejandra Espinoza, Ana Patricia Gámez, Clarissa Molina and Francisca Lachapel are references in the Spanish-speaking entertainment industry.

In an exclusive interview with Right Now, Osmel Sousa revealed his favorite queens in the history of Nuestra Belleza Latina.

“To the girl from ‘El Gordo y la Flaca’ (Clarissa Molina). They had eliminated her and I looked for her in New York, and she was the one who won afterwards. I live in Miami one block from where she lives, sometimes we meet for breakfast and talk.

With the Cuban, Greidys Gil, I always had great affection for her. All of them are very special to me.

And of course, the first (Alejandra Espinoza), who has done wonderfully well in her career. Her husband (Anibal Marrero) is a wonderful and terrific choreographer. I do have very good memories of all of them and I don’t want that memory to spoil.

All the girls who came out of there and were winners, they are all very dear to me. When they see me, they always treat me with a lot of love and affection. Tell me with Anita (Ana Patricia Gámez). Many of those who competed and were not winners, but who were finalists and work in the middle; whenever I see them they greet me and speak to me with great affection.

I also have great affection for Giselle Blondet (Gigi) and I am delighted that she is also here this year ”, said the famous Beauty Czar. 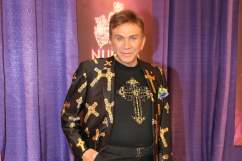