Who was Sarah Hale, the 19th century “influencer” who made Thanksgiving a national holiday in the United States

If Sarah Hale had been born in the 21st century, she would be branded as an “influencer”.

So says Melanie Kirkpatrick, author of “Lady Editor”, a biography about Sarah Hale, a woman who made history in the United States but whose name is almost unknown.

Sarah Hale was born in 1788 and in her 91 years of life she demonstrated many talents. She was a writer, editor, composer, teacher and a great fighter for women’s rights.

And also is responsible for the Thanksgiving or Thanksgiving celebration to be considered a holiday throughout the United States.

Who was Sarah Hale?

“This is a difficult question to answer. She was many things. In my opinion, it was the most influential woman of the 19th century in the United States “, tells BBC Mundo Kirkpatrick.

“Sara Hale had an amazing influence on the culture of the 19th century, although is not very well known today“, Says Patricia Okker, author of” Our Sister Editors “, about Hale and the tradition of women editors of that time in the United States. 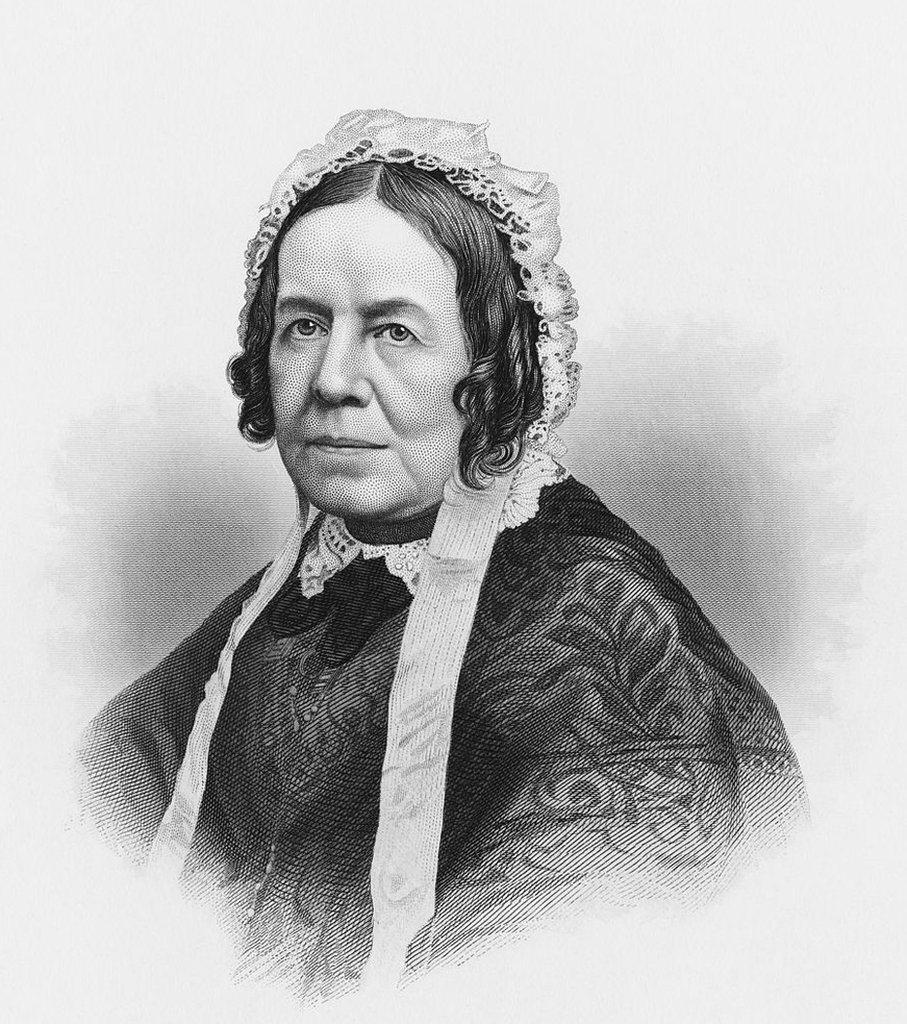 Sarah Josepha Buell was born in Newport, New Hampshire to a low-income family but with a strong belief in equal education for children, regardless of gender.

For this reason, when her husband David Hale died in 1822 and she was left a widow with five children, she embarked on the adventure of working what she did best: writing.

His literary knowledge and skill with words made him editor for 50 years from the most popular magazine from the pre-civil war period called Godey’s Lady’s Book. 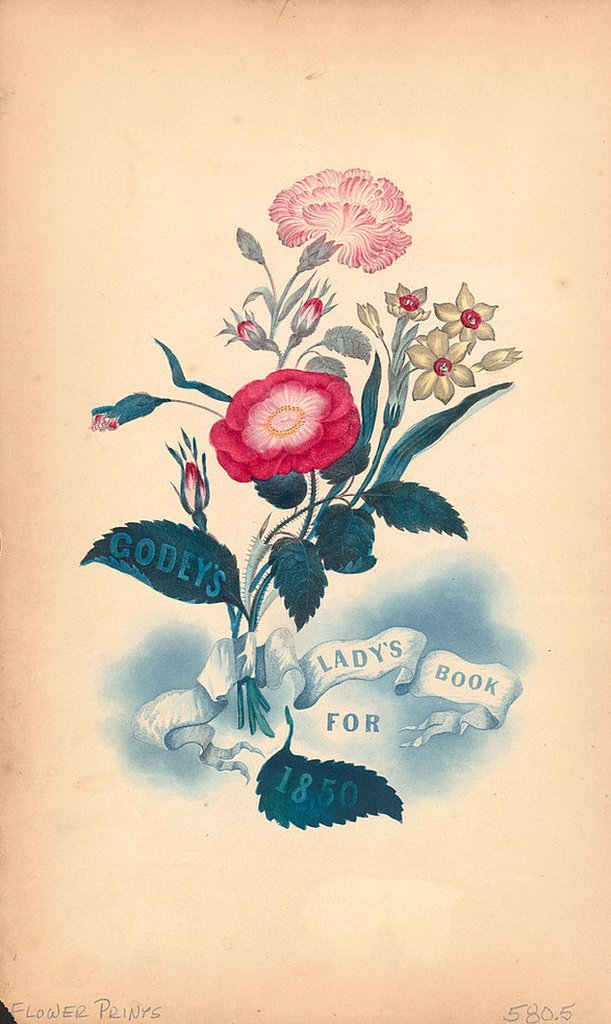 And certainly his half-century work served as a platform to fight for various causes.

When Sarah Hale began her professional career in the 1820s, half of American women were illiterate and there was no college that accepted them.

“The general idea was that women were not intellectually equal to men. Hale argued that women’s ability was the same as men’s, the different thing was that they had received no educationSays historian Kirkpatrick.

In the magazine she edited, Hale included articles on women’s education and little by little they began to create an impact with readers across the country, helping to change the national attitude.

By the 1870s, there were already schools and higher educational institutions that accepted women. 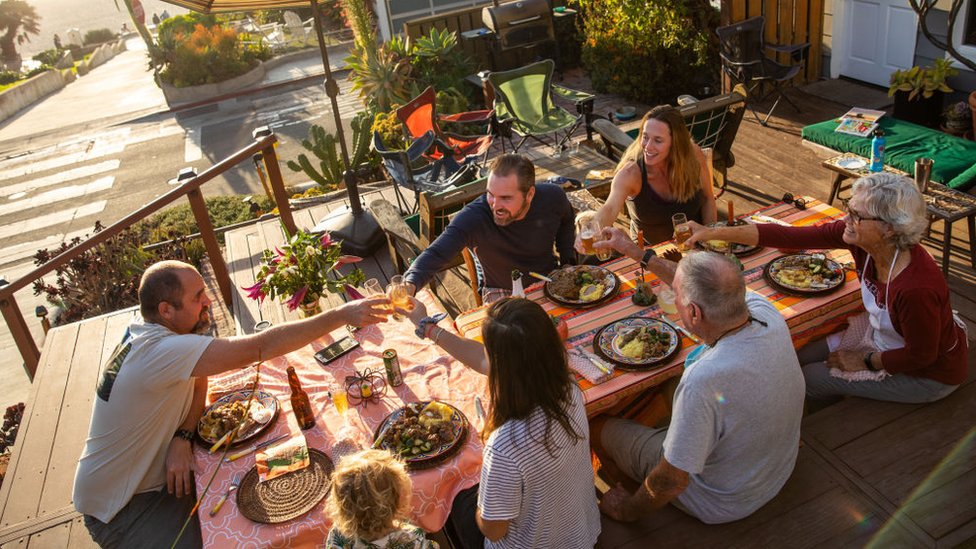 Thanksgiving is the most important celebration among American families. (Photo: .)

But Hale also fought for women’s right to work, especially to teach.

She argued that the only way the country could afford to offer universal education and combat illiteracy was by hiring women because that profession was not among men’s top choices and also because women would work for lower wages than they.

Seen with today’s eyes, Hale could be interpreted as advocating female labor exploitation.

“But she saw it as kind of a first step. The teachers were young, single women. And she thought that men who had family responsibilities should be paid more, because they had to take care of a wife and children, ”Kirkpatrick analyzes.

“Over the years, she championed equal pay for the same work, arguing that women should be paid the same as men if they met the same standards of education, experience and background,” she adds.

And according to the biographer, this struggle for women to occupy teaching roles in the United States, “undoubtedly led to a feminization of the profession ”. 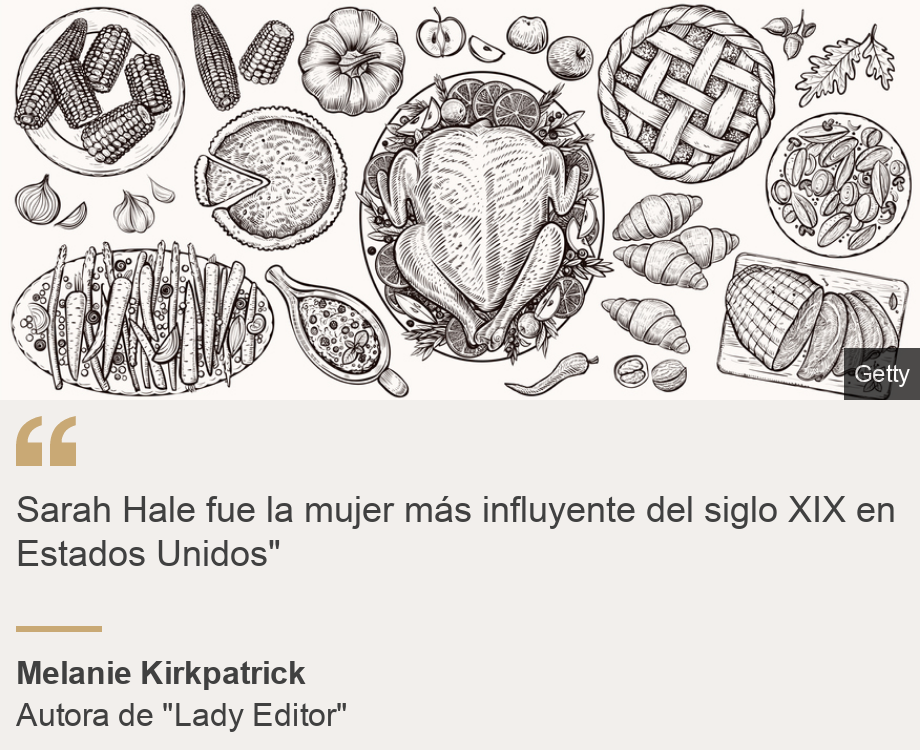 Another of Sarah Hale’s great interests was the union of the country from the cultural aspect. She sought to create a “American culture.”

“She believed that the colonies that had been unified politically by the revolution, were not culturally unified,” says Kirkpatrick.

Thus, in the 1830s he began to publish articles by Americans who wrote about American subjects, since at that time only stories that came from Europe were published.

It also included publications on American cuisine with local recipes, in addition to presenting a section on health, fashion and beauty.

“Because her magazine was so popular and circulated nationally, middle-class American women in all parts of the country read the same articles. And all of this helped create an American culture, ”says the biographer. 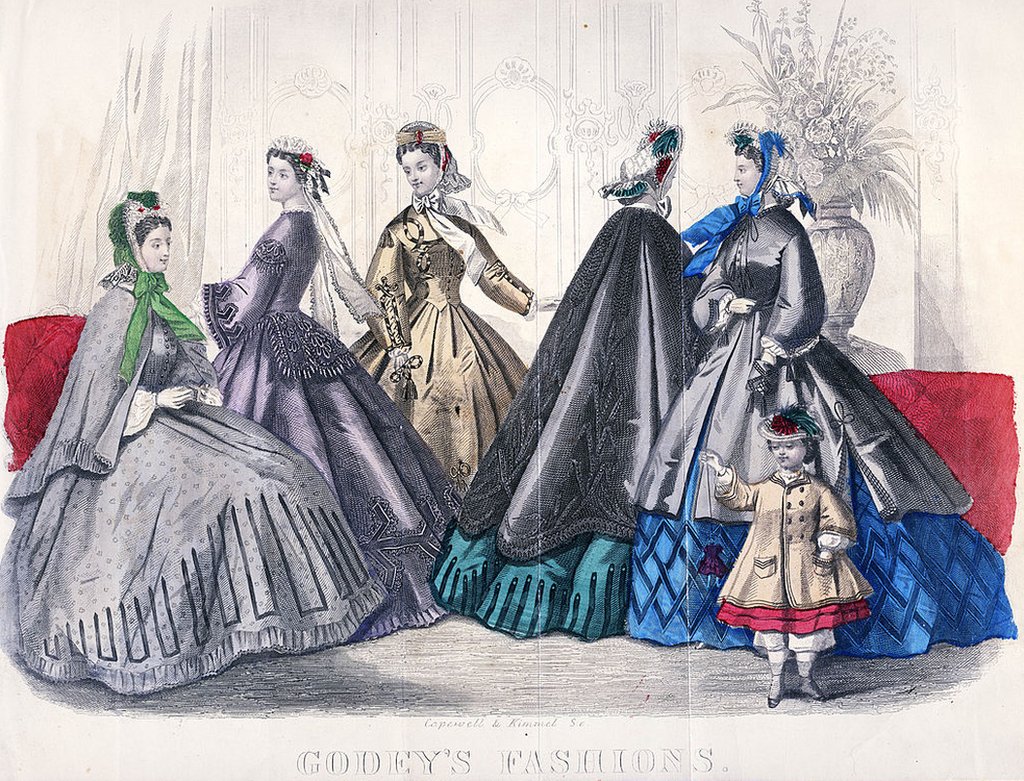 And as part of that very idea of ​​American cultural unification, Hale came up with the idea of ​​having a national Thanksgiving Day.

But the celebration was not uniform across the country and did not have a specific day.

For several years, Hale wrote to governors and presidents suggesting the idea of ​​a party held on the same day across the country to bring Americans together.

She was “what today we would call ‘influencer'”, qualifies Kirkpatrick. 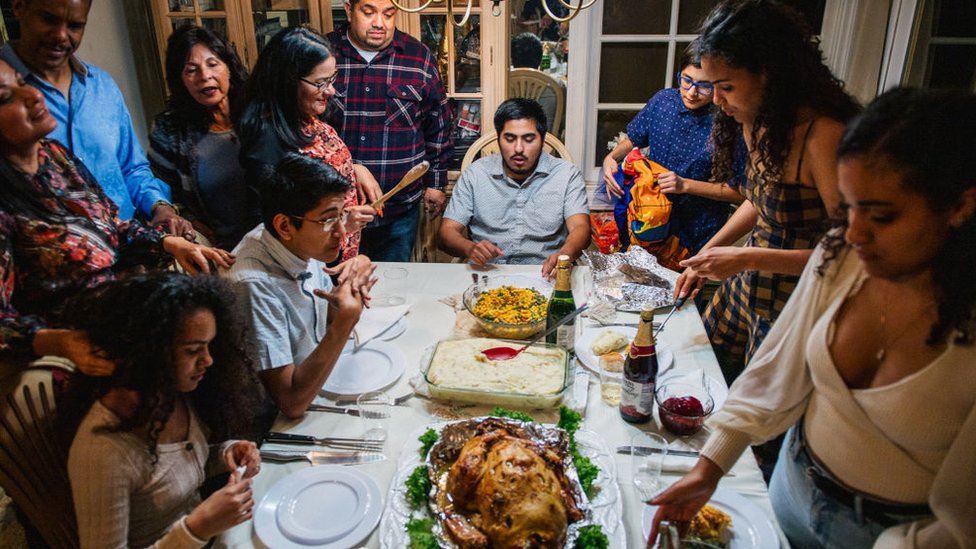 It didn’t have much acceptance at first until President Abraham Lincoln heard it and decreed it.

The official birth of Thanksgiving as a holiday was in October 1863, in the midst of the Civil War (1861-1865) that pitted the Confederate states, partisans of slavery, against the states of the Union, opposed to is.

Lincoln made it a national holiday, to be observed on the last Thursday in November.

Since then, almost the entire United States has celebrated Thanksgiving.

Sarah Hale intended to unify the country, divided by slavery, through a celebration.

However, writer Patricia Okker believes that Hale had a naive view of the reality of America at the time.

“She wanted at any cost to keep the nation together. I wanted the slavery debate to just go away, ”he says.

“We can certainly applaud that initiative that he promoted, But this idea that one meal can erase a history of slavery isn’t just naive, it’s horrible.“, Says the president of the New College of Florida. 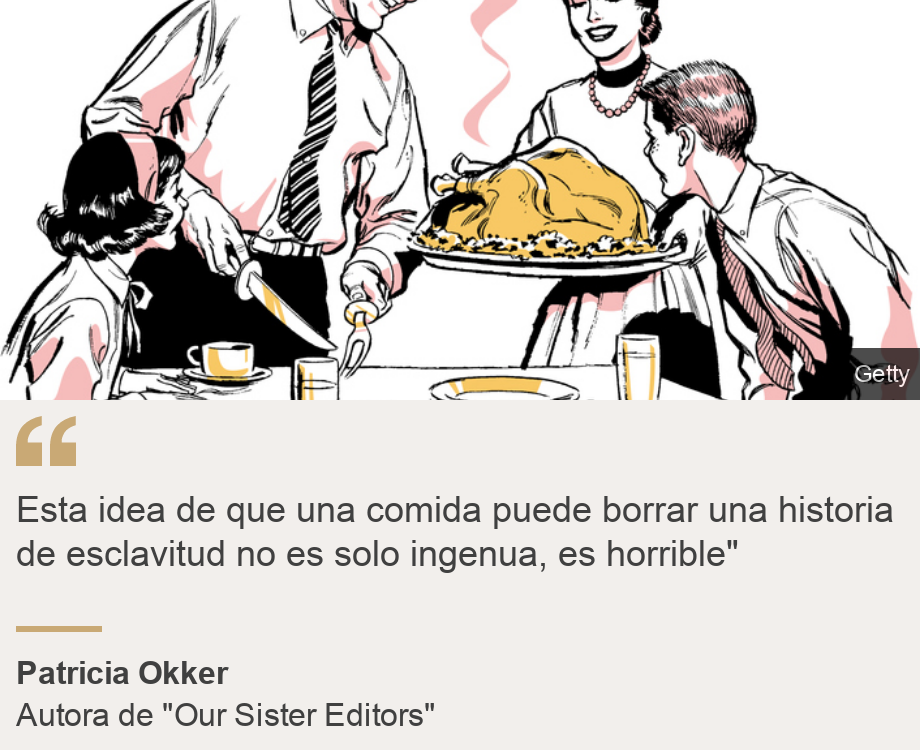 Despite her contribution in the installation of the most important party for Americans, her fight for women’s rights and her work as an editor, Sarah Hale’s name seems to go unnoticed.

“The history of the United States and the literary history of the nineteenth century were largely written initially by men. And the contributions of people of color and women have been largely ignored, ”Okker explains.

So the reason why Sara Hale is not properly recognized in American history “is because of her gender,” he concludes.

* Thanksgiving 2021: How Feasible is to Make Sweet Potato Casserole or Stew the Day Before Serving
* “Don’t let your guard down against COVID-19 this holiday season”: NYC Health Commissioner warns
* Macy’s ‘Thanksgiving’ Parade returns with a “high state of security” and without major restrictions due to COVID-19

Now you can receive notifications from BBC News Mundo. Download the new version of our app and activate them so you don’t miss out on our best content.

Investigators believe that Johnny Peterson, who was 19 at the time of the event, was the one who killed Bryant....