Ana María Canseco returned to “Despierta América” ​​with a surprise appearance in the broadcast of this Tuesday, February 23. However, Canseco’s participation was as a guest to participate in the “Sin Rollo” segment of the Univision morning show.

Through digital platforms, the followers of “Despierta América” asked the television production team to integrate the Mexican television presenter to the team of official drivers of the show, as it was previously. 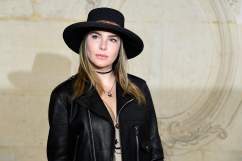 Canseco joins the list of personalities such as Rashel Díaz and Chef James, who were fired from Telemundo and have made guest appearances on “Despierta América”. Despite the excitement of the audience for their surprise appearances, all the stars have participated as special guests.

During her participation in the recent broadcast of “Despierta América”, Ana María Canseco provided her point of view on the latest and hottest topics in the entertainment industry.

Canseco revealed that she currently resides in Texas and is an announcer on her own radio show. In addition, the Mexican is the editor-in-chief of her official website, a platform where she offers a variety of sections related to entertainment.

When asked about her recent move to Texas, the television presenter replied: “I came here to San Antonio because now it is my responsibility as a daughter to come and help my mother. It turns out that she was diagnosed with different problems, until now we are seeing if it is Parkinson’s … She needs my help, it was my time to pay her how much she took care of me and supported me, that’s why I came here to San Antonio ”.

Ana María Canseco is known in the television industry for being part of the team of initial presenters of “Despierta América” since 1997. After 13 years at the helm of the Univision morning show, Canseco said goodbye to viewers after ending her employment relationship with the television network in October 2010.

In an interview with People en Español magazine, the actress also spoke at that time about her departure from the television production of the Spanish-speaking television network: “It’s like when you break up with a partner whom you have loved very much. I have always said that Wake Up America was my dream come true. It was my ideal place, but I understand that I no longer fit into the new format. Also, in a way I represent the original show. “

During the interview with the US publication, Canseco highlighted his gratitude to Univision for the opportunity they have given him over many years: “I am full of gratitude. I have achieved many professional and personal dreams. I got the affection of the public. I got to know my idols, my favorite actors, my singers. I was able to interview them, talk to them. It was wonderful, but I understand that for the new management [del canal] I didn’t have much to do there anymore and I respect that ”.