Why are Lele Pons and her boyfriend accused of animal abuse?

There has been a lot of commotion in recent hours, around the influencer and pop singer Eleonora Pons Maronese, better known in the world of social networks as Lele Pons, and her boyfriend, the reggaeton singer, the Puerto Rican Guaynaa, who are in the eye of the hurricane for having shared a video on their respective Instagram accounts that sparked a controversy for exposing a case of alleged animal abuse, as has been cataloged by his followers and animalists.

The publication of several videos through Instagram stories of the influencer, where it is seen how she is swimming next to a small crocodile, which has its snout tied with a black adhesive tape, is a video that instead of causing great sensation in its more than 43 million followers, has triggered a series of reprehensible reactions from users of this social network, who question the behavior of this woman and her partner, having in their possession an exotic animal outside its normal habitat , and worse than that, having put it inside a pool with chlorinated water.

In fact, some users through social networks have reported that having this type of animal in the home is punishable by law; While the followers of the influencer have defended her and mention that this is not animal abuse.

Lele Pons, who in addition to being an influencer, carries the fame of being Chayanne’s niece, has received harsh criticism with phrases such as “neither being a millionaire, nor being famous, nor being an influencer, nor being anything, justifies animal abuse”; “This is animal abuse, this is not legal and this is horrible”; “It’s called animal abuse”; “What’s wrong, he thinks this is funny, but it isn’t”, it is read among the reactions of several followers through Twitter, who have asked the interpreter of “You can tell” ‘Cancel’.

One user wrote: “Tired of living in a world where Lele Pons is not canceled.”

Tired of living in a world where Lele Pons is not canceled https://t.co/gGWJeTZ94n

Another person in a thread of the same social network with the different images:

Someone tell stefi roitman, lele pons and the other moron that this is ANIMAL ABUSE, a shame that they have an animal TAPED for their fun pic.twitter.com/IULqO33hWG

And finally another user classified the events as ILLEGAL and HORRIBLE:

This is ANIMAL ABUSE, this is NOT legal, and this is HORRIBLE. What people do you post as @stefroitmanok and @lelepons make this viral and public knowledge, it is very sad.
Having an animal for your fun is not okay, 2021 and still has to be explained? pic.twitter.com/QztZ9zEY7y

His friends came to his defense

But in this controversy there are not only Lele Pons and Guaynaa, the singers Mau and Ricky Montar and Estefanía Roitman, Ricky Montaner’s girlfriend, were also involved, who also shared images of the little lizard on their social networks, and after seeing the stir caused, They tried to justify the action why the animal had its mouth covered with black tape.

Due to all the scandal generated, Estefanía Roitman, Ricky Montaner’s girlfriend, tried to justify her friend saying: “Friends, friends. The lizard is in excellent hands. It belongs to a friend of Lele’s who takes care of him since he is a baby in an area where the lizard is in the best condition. He has the tape in his mouth just in case, because he doesn’t know us and he can bite hard. Then they take it away, ”he wrote. 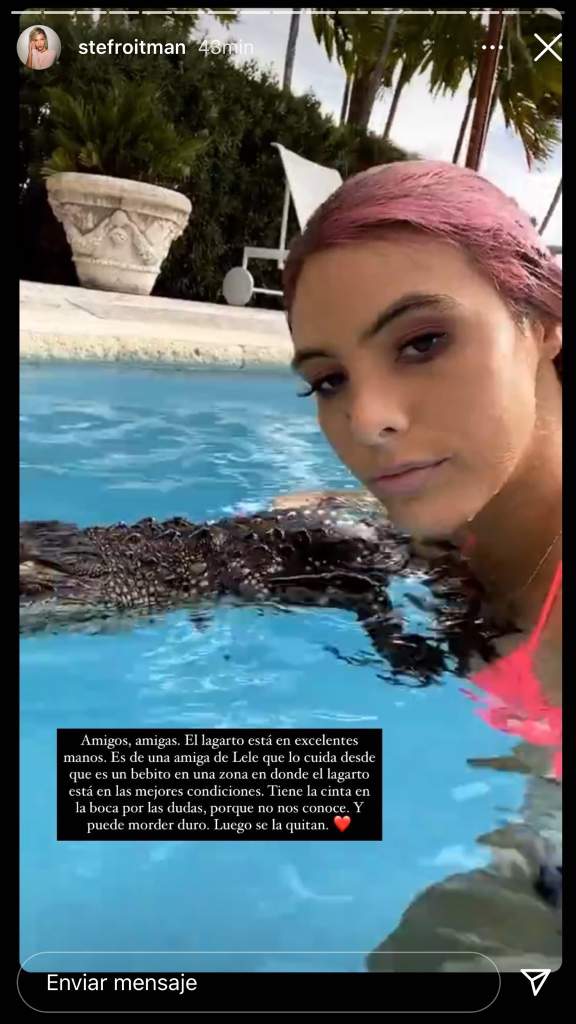 However, Roitman’s statements were of no use, and on the contrary caused more outrage on social networks, so Stef could not bear the pressure and deleted the photograph from his Instagram stories, as did the other celebrities involved. in fact and that they had shared photos and videos with the animal. Despite this, the screenshots have been saved and Internet users have been in charge of spreading them all over the internet.

# 19Jan Lele Pons was harshly criticized and accused of animal abuse for swimming with a crocodile https://t.co/NHtoKW4sMa pic.twitter.com/Q3JzMJnir8

It should be noted that this young influencer of Venezuelan origin has one of the Instagram profiles with the most viewed stories on the planet, only on Instagram, she has more than 40 million followers, on YouTube more than 17 million subscribers and, in general, , his videos are played about five million times. These huge numbers of followers make criticism of her behavior more accentuated, since they make her a public figure of whom many followers replicate her behavior.

Finally, it should be clarified that, according to the Centers for Disease Control and Prevention of the United States, in many of the homes of the United States they have some type of reptile or amphibian as pets, but they emphasize that, although it is legal, it is not advisable to remove these animals from their habitat. It is best to acquire them in specialized centers.