Will 2022 be 2019? Less dynamism, the ability to take advantage of EU funds and the government’s electoralism threaten the recovery

Economic crisis Jug of cold water from the INE: Spain grew in the second quarter almost two points less than the announced Budget Plan The Government no longer supports Calviño’s promise and delays the recovery of precovid levels to 2022

The Spanish economy “will recover the level of daily economic activity and employment pre-pandemic before the end of the current year“, so that” the first quarter of 2022 will be the first with a level of activity higher than its equivalent in 2019. “The audacious prediction was launched by First Vice President and Minister of Economic Affairs, Nadia Calviño, when she presented the macroeconomic picture on the one that sustains the General State Budgets (PGE) that this week Minister Montero delivered in Congress.

But reality threatens to make Calviño prey to his words, who in a way burned himself by realizing that promise just two days after the historic review that the National Institute of Statistics (INE) made of the growth of the Gross Domestic Product (GDP) in the second quarter of the year and, more importantly, that the recovery will not be as powerful as the Government sells. The International Monetary Fund (IMF) has already notably lowered its forecasts for Spain this week, clearly cooling official optimism, and the Executive itself has been cautious in the Budget Plan sent to Brussels, avoiding upholding the promise of the first vice president. And there is factors that threaten this process those that were not available until now or that seemed to have been ignored, and it should not be forgotten that, when the levels of 2019 are returned, the lost growth will still have to be recovered.

“Until the end of 2022 we will not be at 2019 levels. The factor that there is a new variant of the virus is important, as it happened in summer. If the virus does not give more scares, the growth will be a fact. And not because Spain is strong or because it has a very solid foundation, but because internal and external demand is going to grow. According to the data for the second quarter, Spain is eight points away from recovering, while France and Germany are only three “, he explains. Maria Cadaval, European doctor in Applied Economics and professor at the Department of Applied Economics at the University of Santiago.

“I still think that in 2022 we will recover the lost level,” he deepens Manuel Hidalgo, PhD in Economics from Pompeu Fabra University and professor at Pablo de Olavide. That revision that the INE made of the growth between the months of April and June, he points out, was a real surprise and for that reason he misses that a more in-depth explanation of that chapter has not been made. Because never before has a figure been modified from 2.8% to 1.1%, and never before has a person responsible for the Economy been rectified so clearly and so quickly by a body that also depends on its Ministry.

Hidalgo maintains that he is sure that it is a purely technical modification, that the INE has not tried to tezanize the INE, something that has been encouraged from some areas, but that it is not clear how it would benefit the Government if it then has to undergo a public rectification so loud. In his opinion, it is possible that part of the growth lost in the second quarter will be carried over to the third, although he also points out that “If the estimates are still moderate, then yes, you have to think that maybe the economy was not doing so well as some of us expected. “And in any case, remember:” Be careful, one thing is to recover and another is to return to the trend. And in 2022 it will not be achieved. “

A key factor in the recovery, in addition to internal and external consumption itself, will be the impact of European funds. And, once again, the Government defends a discourse that does not seem to fit reality. It already did so when it presented the forecasts for this year, at which time it estimated the additional boost at 2.6 points, which, according to the Executive, would take the final growth to almost a totally impossible 10%. The Bank of Spain, on the other hand, estimates that this European push will finally stay at “0.6 percentage points”.

For 2022, the Executive has already added 27,000 million in the Budgets from Europe that it does not yet have and, very importantly, they are subject to conditionality. “The government’s plan with the funds is not the most adequate. It is going quite slowly. Calviño was in Santiago 15 days ago to discuss with the president of the Xunta, Alberto Núñez Feijóo, possible actions and measures. One year later!“Cadaval takes up.” The EU gives us candy but also sticks. The reforms that are required for European funds are green. We must take hold of the pension reform, the labor reform and not in the sense that Yolanda Díaz would like, “he explains.

“In Germany we still do not know for sure who will govern, but we do know that it will be a coalition government. And it is likely that the finance minister is from the Liberal Party, and that formation has already warned that in 2022 it wants check who has received the amounts and for what he has used them “, it has an impact Ramon Forcada, Director of Analysis and Markets at Bankinter.

“I am more concerned with the execution of the funds than with conditionality“Hidalgo responds, thus providing another key. He does not consider that Spain’s problems to make the most of possible funds are” secular “, as other economists point out. But in this case he is concerned about the Administration’s ability to take advantage of the huge European plan and, coinciding with Cadaval, indicates the rhythms: “All the calls that have come out of the Next Generation are not closed. This is going to go slow, slower than it sounds. ” 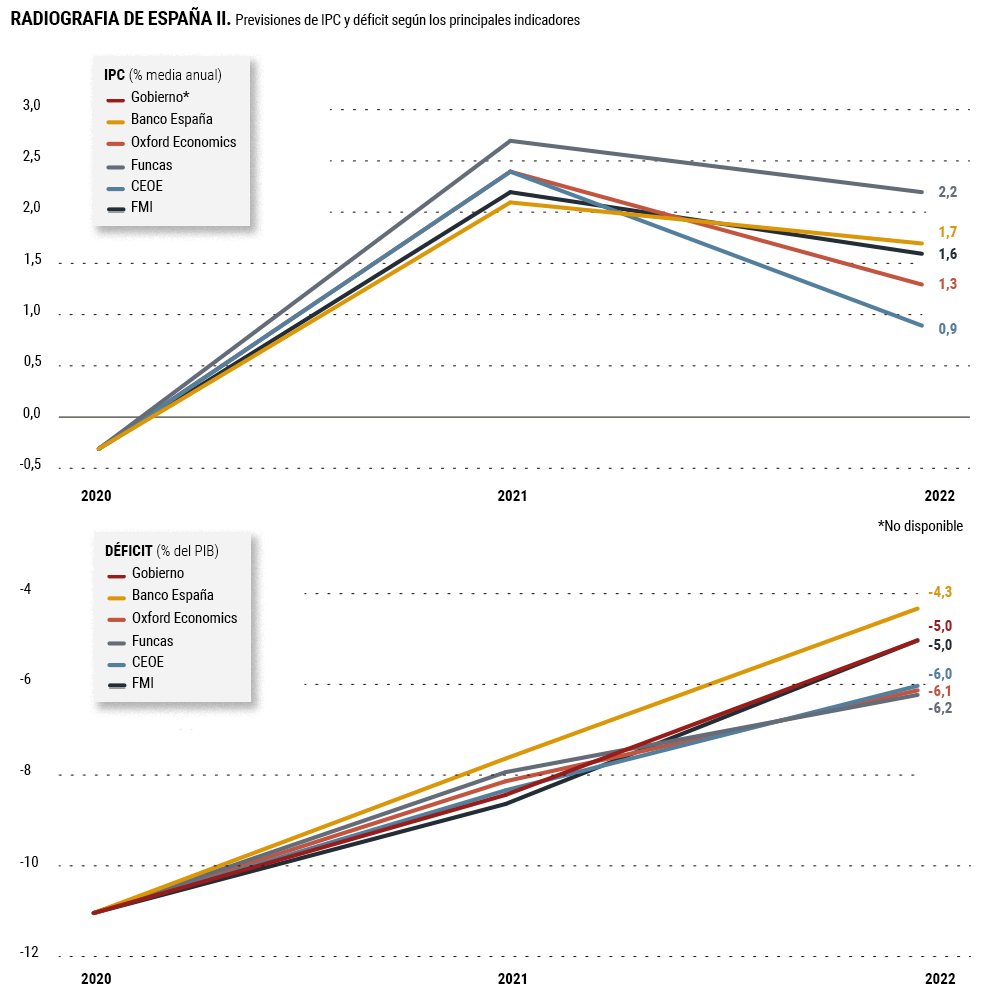 The politics itself and the level of Spanish politicians do not play in favor of recovery either. On the one hand, because the Government is determined to obtain electoral benefits from the large amount of resources that it will have. The Budgets themselves for next year already point in that direction. And on the other hand, because the opposition’s attitude is not the most appropriate either, the one that the country needs and the one that the economy also needs to not only get out of the crisis, but also to make the change in the production model that it needs.

“We have been in office for two years and they are almost already thinking more about the next elections than about the necessary reforms. In addition, I do not see the political consensus that the moment demands and that, however, does exist in the economic sphere in terms of the actions that are most necessary “, he develops Santiago Calvo, researcher in economics at the University of Santiago de Compostela.

A great example of this is the document Spain 2050, whose content, at least in some chapters, is of high quality. The texts devoted to productivity problems, for example, are of remarkable clairvoyance and are signed by some of the most important economists in Spain. But what most transpired from that document was, on the one hand, that the Government wanted to limit domestic flights and the consumption of meat, which were actually almost anecdotal proposals, and, on the other hand, the spectacle that the Prime Minister, Pedro Sánchez, and his then most direct advisor, Iván Redondo, created around the report.

“It was almost as if Pedro Sánchez and Podemos wanted to take over ‘Spain 2050’, when what is probable is that until that moment the Governments of different signs follow each other. It should be a country project, “emphasizes Calvo.

Inflation is a surprise guest that until recently no one counted on, and that poses a clear threat to the recovery process. “A priori, it does not seem that it is going to be a big problem, because the underlying is controlled. If we are lucky that it is not a very cold winter and the demand for gas does not deviate much more, inflation could start to fall. But if you don’t, yes, it could harm the recovery“develops Cadaval.

“The central banks are kidnapped by their role in the world: they have abandoned their role as tutors and watchdogs of inflation. Now they have to protect jobs, growth and inflation as well. And they are kidnapped by their decisions, which are positive for growth and employment. But they are very aggressive They face a very big dilemma: we have put everything necessary to reactivate the economy, but now we cannot control inflation, because they cannot raise interest rates. How are you going to tame inflation?“, exposes Forcada.

The creation of new taxes and the fiscal reform do not generate the greatest security either. The action of the PSOE and Podemos Government in this matter has gone in the opposite direction to that of the rest of the major European economic powers during the crisis, and this is something that can hinder the recovery process and that is noticeable, for example, in the stock markets.

“The Ibex has risen 10.5% in the year, but the Eurostoxx has risen 14%, the S&P also exceeds the figure for Spain and Italy, which is also a recipient of funds but where they have Draghi, the rise is 17%. Taxation has to be aimed at promoting employment, investment, and we are the only country that continues to create taxes. Earnings per share on the Ibex in 2022 will still be 5.7% lower than in 2019, while in the US and the Eurostoxx they are already higher. And even the 10% profit seems to me too much, which they have because there are Spanish companies that are first-rate in their sector. Iberdrola, Santander, Cellnex, Inditex … They are the ones that are behaving like American companies and they are the ones that have a pull “, Forcada ditch.