“Ricardinho has been telling me about Velasco for years”

FC Barcelona starts this Saturday the league title defense at 8.30 p.m. (GOAL) on the always complicated track of Palma Futsal, a team that has fallen twice this preseason, although without the seven players who have played in the World Cup.

The new Barça coach Jesus Velasco He has only been able to work two days with the entire staff and he will not be able to count on one of the only two signings of the team, a Carlos Ortiz who has slight discomfort from the World Cup and whose debut as a Barça player will be postponed for about two weeks.

Yes there will be, on the other hand, the Spanish internationals Adolfo and Dídac (eliminated in the quarterfinals), the Brazilian bronze medalists Ferrao (Golden Boot of the tournament), Adolfo and the star signing Pito, as well as the new world champion André Coelho.

The Portuguese, who ends his contract in June 2022, spoke with SPORT in the previous meeting in the Balearic Islands in an interesting interview in which he explained his feelings after add universal gold to the continental one achieved three years ago in a team that continues to lead the veteran Ricardinho, undoubtedly the best player in the world in the 21st century, possibly alongside the Brazilian Falcao.

Have you already assimilated what they have achieved?

It has been a very beautiful story for our country. It was already incredible when we were European champions and now I can’t find the words to explain what it means to be world champions. In a few years we will be aware of what we have achieved. 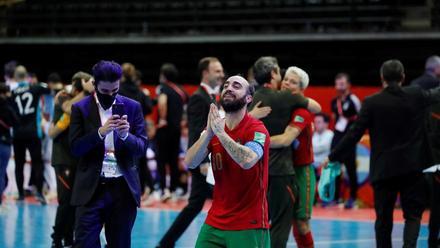 Ricardinho is still a leader at 36 years old

Yes Yes. For me he is the best player in history. It is very complete. He is the best attacking, perfectly defending the five for four and the four for four. The youngest who played in the World Cup in Colombia have grown a lot thanks to him. In all the training sessions he talks to us, he tells us where we can improve and it is even better off the track, really.

You have been very important in this Portuguese team …

Yes, I feel very good. I have been with this coach for many years (Jorge Braz), he gives me all his confidence. He always tells us that we are the best and this message for 10 years has penetrated a lot, so we go out without any fear and show what we are.

Last season was very difficult for you. If they told you in December that this would happen, would you have believed it?

It was a difficult season, yes. At the beginning everything was going well, but then I spent three months almost without playing and it was very hard, I’m not going to say no, but I have a lot of confidence in myself and I knew that I was important in this team. In the Champions League that we lost I started to play more and from there everything has gone up. I got through those three months with the help of my wife, my friends and everyone. I worked hard and was able to help win the league, which was incredible. 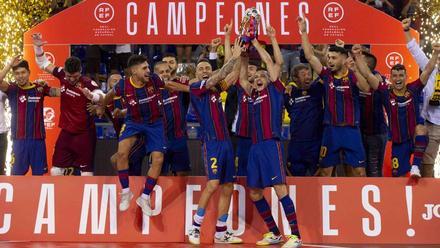 The Barça resorted to the heroic to win the league

The Portuguese have the appearance of fighters. Do you agree?

Yes, we are like that. Ricardinho told me the same thing. Today not so much, but they have always seen us as minors, as we are not so good. I notice that, but we know that we have to fight for ourselves, to defend our country, nothing more.

Andreu Plaza brought it and it was very important to you, but during that time he stopped putting it on. What memory do you have of him?

It has been very important to me. From the first day he talked a lot with me, he explained his project to me, I accepted and I have always given everything for him. He is a great person and even when he wasn’t playing I could never say anything against him, because one thing is the court and other personal relationships. And inside he didn’t do anything bad to me either. He always encouraged me to keep working and explained what I needed to improve. I talk to him, we have done it several times during the World Cup and he is a friend that I have forever. 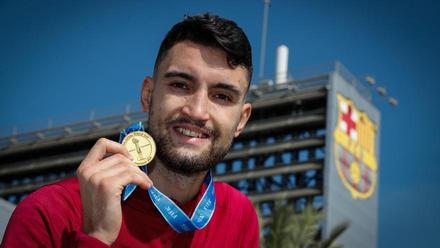 Are you facing this season with more confidence?

I continue with the same illusion. Last season we had a brutal team and now we are taking one more step even though we are less. I like the squads of 11 court players. They are all world top players. Individually, Barça is no longer new to me and we are going to fight to win everything with the help of Pito and Ortiz, who are two extraordinary reinforcements.

I have a feeling that you are more comfortable with a sheer zipper to the side. It may be true?

I love defending and taking care of rival centers. It’s what I like to do the most, but I’m a very offensive finish and I’ve always been in Braga and Benfica, although without being a pure winger with dribbling and one for one. At Benfica I had Marc Tolrà at my side and in Portugal there is Erick. I like to play with another closure, because it gives me more freedom. And here is Marcenio, Ortiz and then Dyego, who allows me to attack a lot. And Ferrao, who covers my back when I go up. So yes, I like to attack and have a player by my side who gives me confidence to go forward.

And the defense of five for four …

Yes. It is typical of closings. I was improving in Braga when the coach began to put me on the defense in inferiority. In the national team we have Joao Matos, although he was not physically well and it was my turn and last season he always came out in those situations. I like it a lot, because it is a situation of maximum demand and I manage to manage my effort well by the end of the game. Notice that most of my goals came defending five for four. 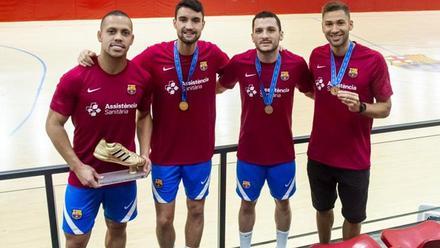 Have you had time to talk to Jesús Velasco? What do you say?

Yes. He seems like a fantastic person to me. Ricardinho has been telling me wonders about him for many years and so has Bruno Coelho, who played under him last season in Paris. I really wanted to come and work with him. He is very concerned about all aspects, he has asked me how I am, if I need something. And on the track he explained to me what we are going to do and what my role will be. It has given me a lot of confidence.

Do you think this Barça will be more of an offensive player?

Yes, Jesus’ style is to have a lot of ball possession and we have a lot of quality in attack for it. We only have one training session, but it has been like that in all his years at Inter and last season in Paris, when he saw many games to follow Ricardinho and Bruno. It is a lot of having the ball for a long time and it is a great key to winning, because while you have the ball the opponent cannot attack. We are going to work on that for sure.

Do you have to be patient or are they going to win at Palma?

No, I don’t think we have to think that we can’t do well at Palma. We are almost all from last year, we only have two new signings and also Carlos (Ortiz) is not going to be and physically we are well, because we come from a very important competition. Of course it is not the same, because we have hardly been training together, but it will be a highly contested match and if we match Palma’s competitiveness, which we know how to do, we can beat them, because individually I think we are better. On an individual level, I think we are the best in the world, but that alone does not lead to victories or titles. 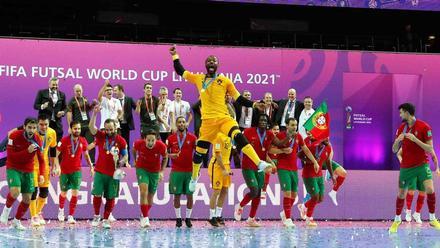 Coelho, right, celebrating the title with his teammates

Look at Brazil in the World Cup, they are the best in terms of player by player …

The matches are won based on competitiveness and fighting, as we did in the last League. For me Brazil on an individual level is the best team in the world. He can make three selections that would be candidates to fight for the gold, but he has not won it. I do not know. We beat Argentina like this. They are more intense, we equalize it and I think that we are better there. In Brazil, any player can decide a game at any time, but we need more of the collective work and there we were superior to Brazil.

What would you ask of this new season?

Above all continue enjoying. When we finished the World Cup, I told my teammates that I was as happy for the title as when I played in my hometown in Portugal (Aveiro). For me it is a joy to come every day to train and play the games, so I only think about that, to continue enjoying it. I have been very happy in Barcelona from day one and I would only ask that injuries be respected.

“The Royal Society is not a leader by chance”

“The Royal Society is not a leader by chance”